I rarely listen to podcasts so I had no idea what to expect from A Gay and A NonGay, apart from what the show’s title blatantly suggests. The camaraderie between James Barr (the gay one) and Dan Hudson (the non-gay one) is phenomenal, and it’s clear why the podcast has become popular – in short, it’s good. The format is fairly loose, and the recording I attended featured a plenary session (it’s great to be back after the public health restrictions, how wonderful to see live audiences again, and soon), a section called ‘Things That Dan Cannot Say’, a safe space for Hudson to wax lyrical about whatever he would like to say without fear of being ‘cancelled’, and two lengthy interviews with special guests. 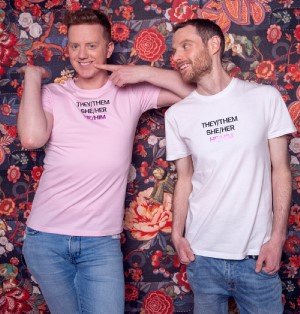 Devoid of gimmickry, the conversations flow freely, with one of the guests, Joseph Parsons, being caught unawares at how serious the discussion had become. Parsons is making his own Fringe debut in a show called Equaliser, about a gay man who also loves sports – that alone sparked a hilarious exchange between the panellists and the audience, some of whom, having no interest in sport of any kind, thought Match of the Day was a daily programme that covered the major matches of major sports that had taken place in the preceding twenty-four hour period. The conversation about homophobia in sport was a compelling listen.

Sikisa, as she likes to be known, is an immigration lawyer as well as a writer and comedian, and runs the stand-up ‘Comedy Lab’ at London’s Soho Theatre, which, to summarise an entire syllabus in less than a sentence, is a course that culminates in a five-minute stand-up comedy set to be performed in front of a live audience. Hudson had participated in a recent Comedy Lab, though his sample material presented here seemed to deliberately make it seem less than a resounding success.

In the end, the show acknowledges that fellow humans, whatever they identify as, have more in common than what divides us. The candid and open discussions about a variety of subjects make for an inclusive and welcoming experience.

James Barr and Dan Hudson present the UK’s funniest LGBTQ+ podcast live, with iconic special guests. A Gay and A NonGay started when Dan’s girlfriend Talia moved abroad leaving he and her gay friend James to fend for themselves. Expect audience interaction, a safe space for Dan to ask questions to the LGBTQ+ community in Things That Dan Cannot Say and a laugh-out-loud look at the differences between Gay and NonGay people. An absurdly simple but hilarious night out, one is gay, the other one isn’t.

The London Philharmonic Orchestra, under its chief conductor Edward Gardner, opened its 2022-23 season at the Royal Festival Hall with a thrilling … END_OF_DOCUMENT_TOKEN_TO_BE_REPLACED

The last in the Sherlock Holmes novel, The Valley of Fear, is adapted in an ambitious production - the general reaction immediately after the show … END_OF_DOCUMENT_TOKEN_TO_BE_REPLACED

The stage location of this urgent and eccentric play from the production company Fuel is nothing if not dramatic. Here we are in the riverfront … END_OF_DOCUMENT_TOKEN_TO_BE_REPLACED

The blurb for Lullaby of Scavengers didn’t really prepare me for the show, sure it mentioned that there may be some explicit content and there was … END_OF_DOCUMENT_TOKEN_TO_BE_REPLACED