This is the kind of show that will preach largely to the converted, if not the choir itself, although this is probably by default rather than design. The Edinburgh Fringe is a relatively environmentally friendly place anyway – even if it is sometimes hard to believe that, with the sheer number of flyers being pushed (occasionally literally) into people’s hands. But most first-time visitors to the Fringe comment on the large amount of walking involved in getting from venue to venue: the collective carbon footprint for punters really is quite minimal. 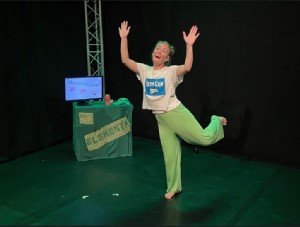 Anyway, those who see no benefit in pursuing environmentally friendly lifestyles will very likely have made choices to see something other than Elemental, an intriguing look at green issues and what can be done, realistically, to keep the planet from suffering from the worst effects of human consumerism. It’s a bit like me having no interest in the circus and therefore not seeing any circus acts (I still maintain a play with songs about the circus is not the same as the circus.)

Elementa (Sian Eleanor Green) is also the name of the superhero who has battled through the ages but faces the toughest challenges yet in the current era. To do this, she wants to enlist the help of the human population. Well, enlist is probably the wrong word – gently encourage is more like it, with the audience assuming the roles of participants at HeroCon, a convention for fans of superheroes, the ones who wear capes and do extraordinary things usually beyond the boundaries of human capability.

The convention as a whole is sponsored by a fuel company, which is at odds with some fans / followers / supporters (delete as appropriate) of Elementa for that company’s lack of environmental credentials, and by yours truly for being – presumably – one of those companies that has made a significant increase in their profits in the last financial year to date despite an energy and cost of living crisis.

There’s a little bit of song and dance but for the most part, the show is a talk at a convention, with a talkback session at the end. Some things have to be imagined, such as the background noise of other talks in adjacent spaces seeping into this one, and vice versa. Environmental radicalists would, I think, long for Elementa to go much further in her calls for action. But I liked the constructive suggestions – Elementa clearly doesn’t think there’s anything to be gained by glueing oneself to the M6, for example. How lovely to have an opportunity to consider the environment without aggression or confrontation: this is a delightful production, deploying light humour in a way that provides substantial food for thought.

Presenting a one-woman show about a planet-saving superhero who has lost her mojo. Elementa was powerful. Is powerful. But now she’s washed up and burnt out. The good old days of battling environmental supervillains like Fogzilla and Acid RainMan are long gone, as her time is now filled trawling trenches for litter and refreezing the ice caps, one cube at a time. This is an endearing and exasperated comedy with a refreshingly imperfect eco-warrior protagonist from writer-performer Sian Eleanor Green. Premiering at the Edinburgh Fringe 2022 then off to conquer the world… or… something.

Harold Shipman, known to his many patients, family and friends as ‘Fred’, was Britain’s worst serial killer. The official inquiry into his crimes … END_OF_DOCUMENT_TOKEN_TO_BE_REPLACED

Being one of Arthur Miller’s best-made and most challenging plays, The Crucible is also one of his most frequently performed. I was going to say … END_OF_DOCUMENT_TOKEN_TO_BE_REPLACED

To be fair, Linda Lavin called her concert Love Notes, there’s an album of the same name, and that’s more or less what it was about - variations on … END_OF_DOCUMENT_TOKEN_TO_BE_REPLACED

Noughts & Crosses is a euphemism for blacks and whites. The Noughts are the whites and the Crosses are the blacks. In the world of the play, the … END_OF_DOCUMENT_TOKEN_TO_BE_REPLACED

This ‘juke box’ musical offers highly polished, undemanding, feel-good entertainment, showcasing, as it does, 30 songs dating from the 1960s to the … END_OF_DOCUMENT_TOKEN_TO_BE_REPLACED