I don’t think I’ve ever watched an entire episode of The X Factor from beginning to end: the last time I saw any of it, some years ago, the show was about to send one of its miscellaneous acts away (or, to put it another way, tell them to [insert expletive of your choice] off). But before they did that, the show cut to a commercial break, and I had no interest in sticking around to find out who was being given the honour of escaping from what seemed to me to be an unpleasant environment, especially as I had no idea who any of them were. 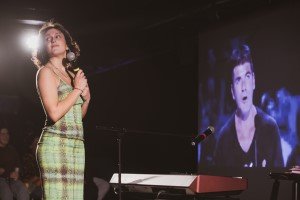 I’ve never been much of a fan, either, of the sort of withering putdowns given to auditionees (I think that’s what they’re called) who are, at face value, able to hold a tune, or the frankly intrusive backstories, as though being born prematurely and being eligible for free school meals as a child make someone a better singer as an adult. Emily Wilson’s account of her experiences on the USA version of The X Factor is shocking and harrowing, drawing gasps from the unassuming audience at the performance I attended. Bear in mind that the said audience was largely made up of people who watch The X Factor and can reasonably claim to have some knowledge of how the series works.

Partly thanks to an extensive back catalogue built through social media channels, the show has a lot of video footage that tends to speak for itself. For a long time, she collaborated with school friend Austin Percario, posting videos of themselves singing chart music songs under the name ‘Ausem’, a combination of the first syllable of Austin and Emily. But if their significant and growing online fanbase thought Ausem were awesome (geddit?), this didn’t extend to The X Factor’s judging panel – most of whom thought Wilson wasn’t nearly as good as Percario, to the point where Simon Cowell asked a fellow panellist whether she thought the show should put Percario forward to the next round and send Wilson home.

The narrative isn’t all about the sodding competition – there’s ‘stuff’, if I may use an American term, about her parents being ‘conservative Republicans’ (I assume there must be ‘moderate Republicans’ out there somewhere). Such was their political commitment that she was inclined in adulthood to become a liberal. She says enrolling in New York University (NYU) played a part: I suspect she may have changed her ways regardless.

“What are they doing to my daughter? That’s not fair!” Wilson’s father, visibly upset, calls out from backstage as LA Reid, Paula Abdul and Nicole Scherzinger stick the knife in and twist it. Oh, and Austin is gay – and it’s not so much that there was any concern that Wilson’s parents would disapprove (they voted for Mitt Romney instead of Barack Obama, and Wilson doesn’t even want to go there with regards to the time when orange really did become the new black in the White House), but Wilson didn’t realise, and was madly in love with him, dreaming of a future together and all the rest of it.

The laughs come thick and fast in this fascinating journey, which provides some insight into what it is to grow up in the social media era and therefore publicly go through the process of realising one’s dream of stardom. The narrative becomes increasingly ridiculous, and as it does so, the truth of it all is disarmingly honest. I was going to add ‘unflinchingly’ to that, but Wilson flinches regularly throughout the show, and with good reason. In a way, it’s a good thing she didn’t win The X Factor – their most successful act was called ‘One Direction’ for a reason, and it’s hardly unlikely to have been a direction its members would choose for themselves. Possibly one of the most bizarre ‘triumph over adversity’ stories I’ve ever come across, but it’s told with such vivacity and a glorious stage presence. Lively and hilarious from beginning to end. Awesome, even.

Humiliating and outrageous, Fixed is Emily Wilson’s Edinburgh Fringe debut, sharing the story of her disastrous experience as a finalist on The X Factor USA at the age of fifteen.

Emily auditioned for the show in a duo with her best friend, Austin. The judges were torn: they loved Austin, but hated Emily. To make matters worse, Emily was deeply in love with Austin … and Austin was deeply in the closet. Thankfully (sort of), the judges’ love for Austin carried the two through to the next round, and eventually all the way to the nationally broadcasted live shows.

In Fixed, Emily takes her audience through her most embarrassing, cringey, and downright hilarious moments of this nostalgic adventure with a mix of stand-up, original music, and archival footage.

Male bonding contains seeds of sacrifice and understanding to rival any Christian religion's tenets of divine hope and compassion. And in a play about … END_OF_DOCUMENT_TOKEN_TO_BE_REPLACED

I hugely enjoyed The Shawshank Redemption. This 2009 adaptation by Owen O’Neill and Dave Johns is based not on the 1994 Columbia Movie but on Stephen … END_OF_DOCUMENT_TOKEN_TO_BE_REPLACED

This play is, I must admit, intriguing stuff. Michael Aleen (Gwithian Evans) is a patient in a secure psychiatric hospital - and that is the correct … END_OF_DOCUMENT_TOKEN_TO_BE_REPLACED

Some one-person shows feel like full-fledged plays with various characters and moments enacted by a single actor; whereas other single-performer … END_OF_DOCUMENT_TOKEN_TO_BE_REPLACED

According to a friend who holidayed in Cornwall, “everything” in Cornwall is Cornish - that is to say, there are far more products that have some sort … END_OF_DOCUMENT_TOKEN_TO_BE_REPLACED