The pre-show largely involves members of the cast greeting audience members in American accents, every bit as folksy and friendly as people in Manitowoc, Wisconsin apparently like to be. Betsy (Emma Norman) is the local tour guide, whose walking tours don’t exactly take very long, and while there is some initial interest in her selected landmarks, that isn’t what the tourists want to see. In 2015, a crime documentary series premiered on Netflix, called Making A Murderer, and the recognisable buildings from that show were the ones the tourists wanted to get a close-up look of, take photographs of, and so on. 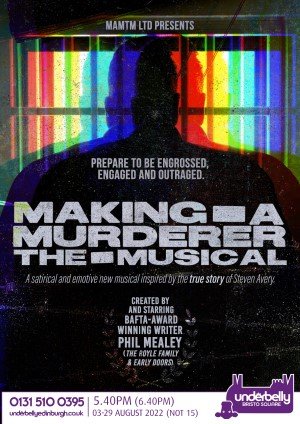 That Netflix show, as well as this musical, centres on the story of Steven Avery (Matt Bond) and his nephew Brendan Dassey (Dean Makoswki-Clayton), who are to this day imprisoned, Avery for life without the possibility of parole, and Dassey becoming eligible in 2048. Things start off bright and breezy, with a song spelling out the word ‘Manitowoc’, in a (sort of) similar musical number to the title track in Oklahoma! A barbershop quartet number about DNA coming to the rescue and helping to acquit people wrongly convicted seems, at face value, joyous. After all, who wouldn’t celebrate being released from jail? But the number also fails to sufficiently acknowledge the wasted years – in some cases, decades – which could never be given back to them.

As the show is only an hour long, it feels rushed – entire appeal processes are exhausted, and not fully explained, in about a minute, perhaps less, which is laughable, but not in the way the creatives (presumably) intended. There are also redeemable features: the choreography largely works well, as do the video projections, and a modest amount of actor-musicianship. The show also lampoons prosecutor Ken Kratz (Phil Mealey) as narcissistic and a bumbling fool, the latter being more than a little odd, given that he managed to get convictions for both Avery and Dassey, which couldn’t have been easy, given the comprehensive case put forward, as this production would have it, by defense (American courts, so American spelling) counsel.

The closing number provides the show with a rousing big finish, and a large number of images of people who served substantial custodial sentences before being found innocent after all is indicative of how black men are disproportionately imprisoned. But something that is meant to highlight flaws in the criminal justice system is too flippant about everything to be taken seriously about anything. A talented cast does their best with what they are given.

Making A Murderer: The Musical, which proudly supports The Innocence Project, follows Avery’s conviction, exoneration, and subsequent re-arrest for murder in his hometown of Manitowoc. Mealey’s captivating comedy-drama takes audiences on an emotional and eye-opening journey into the life and story of a man and his family’s fight for freedom that has enthralled people all over the world and has helped shine a light on the injustices and failings of a broken system.

Harold Shipman, known to his many patients, family and friends as ‘Fred’, was Britain’s worst serial killer. The official inquiry into his crimes … END_OF_DOCUMENT_TOKEN_TO_BE_REPLACED

Being one of Arthur Miller’s best-made and most challenging plays, The Crucible is also one of his most frequently performed. I was going to say … END_OF_DOCUMENT_TOKEN_TO_BE_REPLACED

To be fair, Linda Lavin called her concert Love Notes, there’s an album of the same name, and that’s more or less what it was about - variations on … END_OF_DOCUMENT_TOKEN_TO_BE_REPLACED

Noughts & Crosses is a euphemism for blacks and whites. The Noughts are the whites and the Crosses are the blacks. In the world of the play, the … END_OF_DOCUMENT_TOKEN_TO_BE_REPLACED

This ‘juke box’ musical offers highly polished, undemanding, feel-good entertainment, showcasing, as it does, 30 songs dating from the 1960s to the … END_OF_DOCUMENT_TOKEN_TO_BE_REPLACED