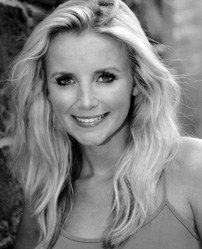 You can read about our previous interview article with Carley below.

The delightful Carley Stenson is currently starring as Margot (and understudy Elle) in Legally Blonde The Musical, following her previous decade of starring in Hollyoaks as Steph Cunningham. Her other television credits include: Faith Hill (winner) on Celebrity Stars In Their Eyes (Granada) and Abbamania (Granada).

Carley has certainly hit the boards running in Legally Blonde and is thoroughly enjoying her role in the type of fun musical that she has had her sights set on for some time.

The Savoy Theatre in the West End of London is some way from the village of Higher End, Billinge, set between the towns of St Helens and Wigan in Lancashire, where Carley was born on 22nd September 1982.

It was obvious from an early age that she was destined to be a performer. “From the age of three, I attended ballet classes, leading into tap, modern, jazz, rock and roll you name it! I had singing lessons every week through high school and college where I trained in theatre studies and contemporary dance.”

Carley values the support that she has been given by her parents and grandparents and their influence was apparent from an early age. “I grew up in watching films with my grandma and grandad, just concentrating on Gene Kelly as we loved him, still do! He was such a perfectionist and you could see that in every performance! There was nothing else I ever thought of doing – performing was me and in me from birth! Before I could speak I would hum to the Dallas theme tune.”

Carley joined the TV Soap Hollyoaks in 2000 at the age of 17, and very quickly became a fan’s favourite in her leading role as Steph Cunningham.  During her time in the role, she faced some heartbreaking storylines, from which she has earned much credit and praise.

Hollyoaks is a long-running British television soap opera originally devised by Phil Redmond, first broadcast on Channel 4 on 23rd October 1995. The programme is set in a fictional suburb of Chester called Hollyoaks and is centred around a local higher education college called Hollyoaks Community College, with the characters generally being in their late teens or early twenties.

When asked in an interview in 2005 having been in the show five years, what is it like being in the show? Carley replied “It’s absolutely great. It’s like a family. I wake up in the morning and it’s like going from home to home. It’s such an honour. It’s really nice to go there and to be surrounded by lots of friends.”

For Carley, from the close-knit community of Billinge, through to Hollyoaks, it was time to head for the bright lights of London.

The decision to move on came in the summer of 2010. Carley said: “Leaving Hollyoaks is one of the most difficult decisions I have ever made. It has been my dream job for 10 years and I shall miss all of the fantastic friends I have made in the cast and crew. I am very sad to leave but I’m ready for new challenges and I’m looking forward to pursuing a career in musical theatre.”

Before joining Legally Blonde, Carley had been a member of a musical theatre group called Diamond (consisting of Carley, Emma Lori Thomas, Emma Schofield and Catherine Rouse) performing at venues all over Britain, with acts such as Lemar and Beverly Knight. Due to work commitments, Diamond has now stopped performing. As Carley says, “We were four best friends who just loved to sing together. We now concentrate on being the best of friends and having fun nights chatting instead.”

Together with several others, Carley joined Legally Blonde The Musical during a cast change, on 25th October 2010. Carley is fabulous in her role as Elle Wood’s Delta Nu sorority friend Margot and has also performed admirably as Elle Woods, the main character. Her reviews as Margot and as Elle have been superb.

Legally Blonde The Musical synopsis: College sweetheart and homecoming queen Elle Woods doesn’t take no for an answer. So when her boyfriend dumps her for someone ‘serious’, Elle puts down the credit card, hits the books, and heads for Harvard Law School!

Legally Blonde the Musical will take you from the sorority house to the Halls of Justice with London’s brightest new heroine (and of course, her Chihuahua, Bruiser).

Having seen Legally Blonde four times I can vouch for the fact that the cast all appear to have a great time on stage, and with the daily tweeting on Twitter, it is also apparent that many of the cast are great friends off-stage. If you haven’t seen the show and you want a fun night out then go and see it! I guarantee you will not be disappointed.

Carley is now an established member of the Legally Blonde cast and clearly has a long and successful career ahead of her in musical theatre.

Carley obviously has a very busy schedule appearing most days of the week in Legally Blonde, but she still takes time out whenever possible to support charities. Carley loves animals and in particular dogs and she contributes actively to support animals in need.

Carley is particularly passionate about New Hope Animal Rescue. New Hope, co-ordinated by Niall Lester and Liesa Hope Clark, helps to rescue many animals, especially dogs, from being put down. Together with a group of supporters, they house the animals and try to find good homes for them.

Carley doesn’t have a dog herself at the moment as with her working schedule it wouldn’t be possible to look after it properly. However, her sister has a dog called Jodie who all the family love.

Carley doesn’t have a pet at the moment but if she won the lottery?  “I would invest in a farm, where we would help unwanted animals, and work alongside New Hope. It has always has been a dream of both mine and my mums.”

There is no doubt that Carley is a genuine star off-stage as well as on it!

Think back. Has anyone ever said to you that looks don’t matter, its personality that counts’ Anyone … END_OF_DOCUMENT_TOKEN_TO_BE_REPLACED