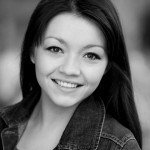 Frances made her West End debut as one of the Divas in Priscilla Queen of The Desert, at The Palace Theatre London, on 7th March, 2011.  She says about Priscilla;“I love being a Diva – the make-up, costumes and wigs are very cool and flying is awesome!”

Frances was born in Glasgow.

From about the age of  four when she was a promising young gymnast and dancer, and at the age of ten, drama classes had also been added to the agenda of a very busy young lady. When her family ‘discovered’ that she could also sing, they decided to put Frances forward for an audition at Glasgow Academy Musical Theatre Arts (GAMTA) which is the leading independent musical theatre training establishment in Scotland and has been producing highly successful and versatile theatrical performers since 1994.

At the time when she joined the stage school, Frances not only had support from her family, but inspiration from some more well-known figures in the pop-music industry. She says; “At the time I joined Stage School I was a huge Spice Girls fan, and actually sang “Stop” as my audition song (whilst everyone else had sheet music to a musical theatre song) so I was influenced by pop stars. As much as I’m still influenced by the likes of Beyonce, and I do love Lea Salonga and would love to have a career like hers!”

Since training at the Glasgow Academy of Musical Theatre Arts, Frances career has included,

Television: Mia in River City, Shona in Lip Service, series finalist for Britannia High, Survival Squad in Against All Odds and Highland Heartbeat feature on STV’s The Hour and PBS in the USA.

Frances very kindly agreed to answer some questions about herself and her career.

Do you have a favourite pet?
“Yes two Pomeranians back home called Coco and Millie who I miss very much! I am tempted to get a dog here in London!”

Are there any long-term ambitions?
“I like Lea Salonga and I would love to play Eponine in Les Miserable and Kim in Miss Saigon.  So Sir Cameron Mackintosh please bring it back to London!”

If you won a million pounds what would you spend the money on?
“You know I have played the lottery numerous times and never even come close to winning a ‘tenner’, so have no chance of being a millionaire (ha ha), but if I did I would love to take my family on a big holiday and visit my Gran in Hong Kong! I’d give a bit of money to my Dad as he paid for my training which I’m really grateful for!

Do you have any favourite ‘sayings’?
“I suppose I like to quote from the movie Mean Girls, but I think anyone who likes it does the same, it’s too funny!”

Which is your favourite part of London?
“Covent garden, and Soho I guess, lots of nice bars and places to eat, and there’s a great atmosphere!”

Have you passed your driving test?
“No I haven’t, but I really should have as my dad is a driving instructor and has his own Driving School! I am desperate for a mini cooper so should really get that test done!”

Do you have a favourite colour in your wardrobe?
I wear lots of different colours and often change my style depending how I feel! I have A LOT of clothes! I do a lot of shopping in top-shop, H&M and AllSaints, but also like vintage shopping! I think my wardrobe and style is very eclectic! I also have a lot of shoes, one might say too many!

What would be your favourite meal if taken out to dinner?
I am a big ‘foodie’, my whole family is, even my dogs! It’s a McCann thing! I don’t eat much Indian food, so I like to go for a curry from time to time. I eat  Chinese food back home, fresh, traditional dishes that my mum prepares so I don’t go out for Chinese often as it doesn’t compare to my mum’s!

What is your favourite musical & favourite film?
“I love West Side Story, love the choreography – especially in the opening sequence in the film! I am also a big fan of Parade! I went to see the production at the Donmar a few years ago and was left in tears as it was so moving, the cast were excellent and the music is amazing!”


Frances is undoubtedly a very talented young actress who I am sure will continue to be a great success on the stage, and in particular the West End.