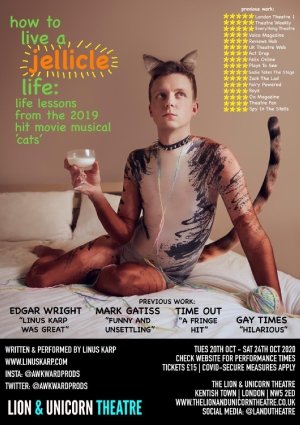 In 2020, Tom Hooper joined an elite group of filmmakers. Along with Kevin Costner and Peter Farrelly, Tom became only the third person to direct both a Best Picture Oscar winner and Worst Picture Razzie winner. The film that secured this was his 2019 version of the musical “Cats”.

Generally panned by critics and musical theatre aficionados, it is very difficult to find many people that actually enjoyed the movie. My mother is one, and the other is a young actor by the name of Linus Karp. In fact, Linus enjoyed the movie so much, he has written a one-man show called “how to live a jellicle life: life lessons from the 2019 hit movie musical ‘cats’” which he is about to perform at the Lion and Unicorn Theatre.

I recently caught up with Linus and Co-Producer Joseph Paterson, and I started off by asking Linus why he wanted to do this:

LK: I really loved the film and became very obsessed with it.

TE: This is true, your Twitter has been full of Jellicle images for quite a while now

LK: Yes. Every time I watch it, I can’t believe it was made. I think there is so much to appreciate in it. The music is so good and there are amazing performers doing amazing things.

LK: I can’t compare it to any other film really. It’s a huge film with an Oscar-winning director and so many big names. So many talented people.

TE: So, do you think it will end up as one of those films that are so bad, they are ‘good’ and everyone has to see them?

LK: There’s such a combination of things that make it both bad and good. Jennifer Hudson singing ‘Memory’ is an incredible performance, even if her snotty cat face looks weird!

TE: Are you thinking it will end up being a really cool movie to see?

LK: It already is. The Prince Charles Cinema was going to host a “Jellicle Ball” screening in April which obviously I got my tickets for. Part of the problem was that the internet hated it. There was a lot of negativity around the first trailer which really set minds, so when the movie did come out public opinion meant critics didn’t dare to not give it 1-star reviews. I’m sure more people enjoyed it than dared to admit it!

TE: Given all this, what then made you decide to write a show about the film?

LK: After I finished with ‘Awkward Conversations’ last year I was thinking about what to do next. I couldn’t find anything I was passionate about as a performer. Then I saw the movie and it took over my entire life and I started thinking about writing something ‘Cats’ related. I hadn’t written a full-length piece before, but when I started on this the words came to mind really easily. Then at the beginning of the year, a friend was putting together a scratch night and asked if I wanted to contribute something. I started writing and quickly realised there was a lot of material for me to use. I had a 10-minute slot at the scratch night but realised I had around 40 minutes of material already. So I cut it down and tried the idea out at the scratch night to get an idea of how an audience would react. Feedback was positive, so I carried on writing, aiming to take it to the Edinburgh Fringe but, of course, Covid got in the way. That said, it has given me more time to watch the movie, listen to the soundtrack and finish the show without the pressure of a fixed deadline.

TE: How would you sum up the show for me?

LK: The show is utter ridiculousness from start to finish, it’s a comedy show that provides a jellicle discussion about how to make your own life more jellicle!

JP: I’ve seen the show rehearsed a lot now, and it’s a real dose of joy that people need at the moment.

LK: It’s a bit like a weird Ted Talk. An hour or so of fun, a bit political and personal at times with a little bit of audience interaction. There will also be some dancing, choreographed by the amazing Sam Carlyle.

TE: Do you have to have seen the film to be able to understand your show?

LK: Not really. Obviously, it is good if the audience has seen the movie so that they get all the references. Plus I think after seeing the show, the audience will go away and watch the movie again, viewing it from a new perspective, and seeing the good and bad bits differently. Rather like they have got an alternate, non-authorised, commentary.

TE: I suppose the social distancing rules have caused some problems for you performing the show?

LK: There are about 20 seats available for each performance, which is still quite decent for a fringe show. That also means it’s easier to sell out! And there are only a few tickets left!
What’s On at The Lion and Unicorn Theatre

TE: In the poster, you are wearing an amazing lycra catsuit – where did that come from?

LK: My choreographer, and ex-flatmate, Sam was in a production of ‘Cats’ when she was about 14, and her mum (Alison) had made the catsuit for her. I tried it on, and it fitted perfectly, so it’s in the show now!

TE: Joseph, as Co-Producer what has been your involvement with the show?

JP: I have helped in getting it up and running, based on the lessons we learned from the tour of ‘Awkward Conversations’ last year. I’ve also offered my opinion creatively, but ultimately, the show is Linus’s. If one of my suggestions lands then that’s great but if not, then that’s OK because Linus knows what he wants from the show and how he wants it going to come across. This show is not just comedy, nor pure theatre, it’s pretty unique really. Let’s call it – Jellicle Theatre.

TE: After all this time with theatres being closed, what will it be like to step out on stage with a real audience?

LK: It will be great to get back into doing a job I love. It will be nerve-wracking but also a relief that I’m getting to do this. Although there will be a small audience, I think they will be very keen to embrace the experience.

JP: I agree. I think there will be a great atmosphere from the audience who will be happy to get out and see something live again.

Well guys, Thank you for that. Very good luck for the run. I’m really looking forward to seeing the show, and I’m now going to head off and do my preparation by watching the movie once more.

As panto season gets into full swing, I’m sitting here, fingers crossed and touching wood - my middle name is Versatile - hoping beyond hope that this … END_OF_DOCUMENT_TOKEN_TO_BE_REPLACED

Sonia Friedman Productions has announced that Ruth Wilson will star in Ivo van Hove’s adaptation of Jean Cocteau’s The Human Voice, which he also … END_OF_DOCUMENT_TOKEN_TO_BE_REPLACED

The award-winning smash-hit production of Girl From The North Country, written and directed by celebrated playwright Conor McPherson (The Weir, The … END_OF_DOCUMENT_TOKEN_TO_BE_REPLACED

John Barrowman is back on tour with his new show ‘I am What I am’ The tour launches on Saturday 30 April, 2022 at Southend‘s Cliff’s Pavilion and … END_OF_DOCUMENT_TOKEN_TO_BE_REPLACED