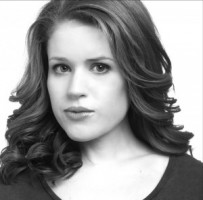 Born in Epping, Essex in 1977, Joanna Forest is an established British actress, having made her London West End debut at the age of 13 she has worked on national theatrical tours, appeared in many regional theatres and also toured Europe as a soloist singer. She has also starred as the leading actress in film and also on television programmes, advertising commercials, music videos, as well as being a voice-over artist.

I recently asked Joanna about her career.

How old were you when you first thought about being on the stage?

I was about 7 years old when I first thought about being an actress. I asked my parents if I could go to the E15 School of Acting’s Summer School for children. E15 is very local to me and was new at the time! The Summer School worked towards a little production to show the parents at the end of the fortnight. I got the main part of Lucy in the Lion the Witch and the Wardrobe. After that I was totally smitten with the stage and determined to be an actress.

My whole family were extremely surprised when eventually I begged to audition for stage school. No-one else in my family has any connection with the theatre, which is why they were a bit shocked, but they took my ambitions seriously and they agreed I should try. I couldn’t believe it when my audition was successful! Having gained my place at The Italia Conti Junior School, my parents were really supportive of me following my dreams. Watching Sarah Brightman perform in the ‘Song and Dance’ on TV introduced me to acting through song and opened up the world of musical theatre to me.

You trained at The Italia Conti Academy of Theatre Arts, what was it like?
I had so many amazing memories. I loved everything about going there. I had such a special school experience and feel so lucky I didn’t go to a normal secondary school. We got to do really exciting things and had fun every day. We got to go on auditions and do professional jobs while studying there. We also got used to knock-backs from a very early age, which has been very useful as there are so many disappointments. I met amazing friends, that are still my friends now, and as it was such an incredibly tiny school, it’s always really lovely to bump into a Conti kid!!

I remember at lunch times we would put on the sound track to Miss Saigon or Les Miz in one of the studios and act everything out. It really was like Fame!!! Italia Conti recently celebrated its 100th birthday and I had a lovely time at the ball that marked this event. It was great to catch up with old friends and the teachers.

What was it like when you made your West End debut at the age of 13 at the Dominion Theatre?
I absolutely loved going from school to the West End and being part of a big musical. It was also great to be in a first cast and involved in a brand new musical. It was fantastic to see how it all came together and I got to see exactly how things work in a West End show!

You have performed in some notable theatrical establishments. Which is your favourite?
When I toured with the musical Dr Dolittle we arrived at a new theatre every fortnight, which was a great way of seeing all of the big theatres in the UK. I have also appeared in a pantomime most Christmases, and so stayed in one particular theatre for a few weeks. This means I got to know these theatres really well as I could really move in and make my dressing room a home from home. Some of the theatres that have stuck in my mind are The Grand Opera House, Belfast, The Mayflower, Southampton, The Liverpool Empire and I love the New Theatre Cardiff.

I spent a long time in The Strand Theatre, now re-named Novello when I played the role of Charlotte in ‘The Weekend’ written by Michael Palin where I appeared alongside Richard Wilson playing his granddaughter. The Dominion Theatre is probably the biggest I have performed in. My favourite, though, is the outside performing space at Shaw’s Corner, where I have appeared in several Bernard Shaw plays for the Shaw Society at his National Trust owned former home.

You toured Europe as a soloist singer in “The Best of Broadway”. Which are your favourite musical songs?
I really enjoyed that job. I got to sing songs from shows that aren’t necessarily my casting. My favourite songs change all the time!! I love all musical theatre, from the oldies to new writing.

You’re a singer and an actress on the stage and in front of a camera, which of these do you prefer?
I really enjoy both. I have done far more theatre, but I would love the opportunity to do more film. Last year I filmed my first feature film, which was a great experience. The film is a period drama called’ Crab Island’ where I had the challenge of playing a blind girl.

Which is your favourite character that you have portrayed?
I loved being Kelly Butcher in Alan Ayckbourn’s Game Plan at the Buxton Opera House, and Margate Theatre Royal. I loved how quirky she was! I should really say Wendy in Peter Pan. I think I must have set a record for the amount of times playing her, as this Christmas will be the 13th year I will be flying to Neverland!!

If you could choose a character to perform in any play or musical, which would it be?
Eponine in Les Miz!

Do you have anyone as a role model that you aspire to be like?
My singing teacher Rosemary Ashe, because she is such a talented lady. She is the most amazing singer and actress.

Who would you most like to work alongside?
Trevor Nunn

Anything else you might like to add?
My most unusual role has been playing a 10 year old boy alongside Tommy Steele in the Bill Kenwright UK tour of Dr Dolittle the musical. It was definitely a challenge playing a boy for year! But great fun!

Joanna wants to use her singing abilities to raise money for CoppaFeel, a breast cancer awareness charity.
After training at the Italia Conti Academy of Theatre Arts, Joanna began to forge her career, with a number of high profile West End credits and TV appearances. It was on tour in Europe, with the musical The Best of Broadway, that everything was about to change.

Joanna had found a lump, but at just 21 it was so statistically unlikely that it came as a huge shock to even her doctors. A big pause button was pressed on Joanna’s life as she underwent several sessions of Radiotherapy and Chemotherapy treatment.

When her treatment finished, Joanna started to piece her life back together, and hasn’t looked back. She is determined to help others and raise awareness as diagnosis in young women often goes undetected with life threatening consequences.

Now Joanna wants to use her singing abilities to raise money for CoppaFeel.