Home » Liverpool Empire About and Information

In 1866, Liverpool Empire began its life as The Prince of Wales Theatre and Opera House and was run by gas light and steam power. The name changed to what it is today in 1895, so has had its name for over 100 years. It went through many refurbishments, before being bought by ATG and the theatre now stands about a quarter size bigger than it originally stood. 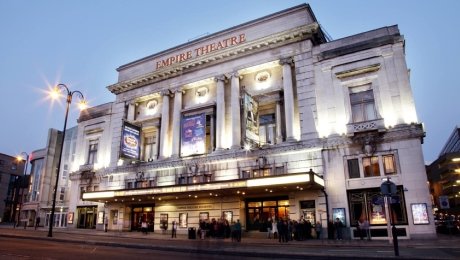 In 2001 Apollo Leisure became part of a large American company called Clear Channel Entertainment before the theatrical division of CCE became known as Live Nation. Recently the Ambassador Theatre Group completed the acquisition of all of Live Nation’s UK theatres, including the Liverpool Empire Theatre. ATG is also one of the country’s foremost theatre producers and has been behind some of the most successful and innovative productions in Britain and internationally.

Security
ATG continues to make the safety and security of its customers and staff a priority. As such, please bear in mind that we may undertake bag checks, so recommend you leave extra time to avoid queues, and refrain from bringing suitcases, rucksacks and large bags into the Theatre. Many thanks for your cooperation.