5-Star Review of Aladdin
There’s something for everyone in this laugh-out-loud and shimmering show, where the cast come across as thoroughly enjoying themselves. Not since Sister Act The Musical played at the London Palladium have I left the theatre feeling so positively upbeat and overjoyed. I wish Aladdin a long and successful run. This is an Arabian night not to be missed - the professionalism and skill in this show is astounding. 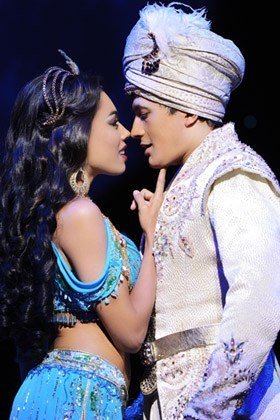 Additional Information
Age Restrictions:
Aladdin is recommended for a general audience. As an advisory to adults who might bring young people, Disney recommends Aladdin for ages 6 and up. Children under the age of 3 will not be admitted into the theatre. All persons aged 16 or under must be accompanied and sat next to the accompanying adult. They may not sit on their own within the auditorium. If children do have separate seats you could be refused entry. All persons entering the theatre, regardless of age, must have a ticket.

Show Opened: 27th May 2016
Important Info:
This production contains theatrical smoke & fog effects, pyrotechnics, strobe lighting & loud noises.
Please note there will be an auditorium blackout of 8 seconds around 45 minutes into the performance.

Why book Aladdin Musical tickets with a See Tickets partner?

The ‘2019 live action version’ of Aladdin (to distinguish from the 1992 animated motion picture), is not the first remake that the Walt Disney Company has embarked on, and the chances are they have yet more in the pipeline. A remake is, of course, an opportunity to revise, reshape and re-orchestrate, and they’ve done a pretty good job on those scores here. There will be those who won’t like the new versions in this Original Motion Picture Soundtrack, primarily because they are such big fans of … END_OF_DOCUMENT_TOKEN_TO_BE_REPLACED

Ahead of its first anniversary at the Prince Edward Theatre, Disney’s Aladdin has released behind-the-scenes photography of the new company in rehearsals. Having opened to critical acclaim in London’s West End in June 2016, the hit musical based on the classic Academy Award®-winning animated film will celebrate its first birthday in the West End on 15 June 2017. Matthew Croke joins the production in the title role of Aladdin, marking his debut in a leading role in the West End, with his first … END_OF_DOCUMENT_TOKEN_TO_BE_REPLACED

Disney Theatrical Productions has released an exclusive first look at Matthew Croke as the title role in Aladdin ahead of his first performance in the title role on 5th June 2017 at the Prince Edward Theatre. The new musical based on the classic Academy Award®-winning animated film will have its first birthday in the West End on 15th June, with Jade Ewen and Trevor Dion Nicholas continuing in the roles of Jasmine and Genie respectively. The role of Aladdin will be Matthew Croke’s debut in … END_OF_DOCUMENT_TOKEN_TO_BE_REPLACED

Disney’s new hit West End musical Aladdin, which opened to critical acclaim in June 2016, has announced a new education programme. This consists of curriculum-linked education resources for Key Stage 2 and 3 pupils, workshops for pupils aged 7+ and a series of behind the scenes videos which include interviews with the multi award-winning creative team. Theatre tickets are now available for education groups of 10+ with prices beginning at £22.50 and education workshops are £12.50 per pupil. … END_OF_DOCUMENT_TOKEN_TO_BE_REPLACED

Being one of those Londoners with as busy a life as the next person, I sometimes struggle to recall what happened a fortnight ago, let alone a 1992 animated motion picture which I only went to see out of a sense of duty, after I had no idea what everyone else was on about at the time. But strenuous efforts have been made by the Disney Theatrical Group to take those who enjoyed Aladdin as a motion picture 24 years ago and now have the disposable income to splash out on a night in the West … END_OF_DOCUMENT_TOKEN_TO_BE_REPLACED

Disney does not do things by halves: even their press launches are slick and polished, with every projection in place as it should be and not a single typo in any of the promotional material. The attention to detail is phenomenal as Thomas Schumacher, President of the Disney Theatrical Group (just one division of the huge Walt Disney Company) explains in an appropriately animated fashion quite what was involved to get Aladdin to the Prince Edward Theatre, where previews for this … END_OF_DOCUMENT_TOKEN_TO_BE_REPLACED