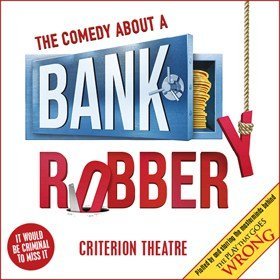 One giant diamond.
Eight incompetent crooks.
And a security guard asleep on the job.
What could possibly go right?

Written by and starring the Mischief Theatre Company who brought you the 2015 Olivier award-winning Best New Comedy "The Play That Goes Wrong" and "Peter Pan Goes Wrong", book now, to be entertained by their unique brand of humour in this hilarious new show - The Comedy About a Bank Robbery.

It would be criminal to miss it.

"It came across to me as the latest in a long line of British farces, and it’s a sufficiently enjoyable couple of hours. The timing, as is required for a British farce of this kind, is impeccable down to the half-second. As ever with Mischief Theatre the primary objective appears to be to provide light entertainment rather than to give its audiences deep and meaningful storylines. There are elements of the plot that are never properly explored or explained, but the show is best enjoyed by overlooking the shortcomings in the narrative, and going with the flow."
Read our 4-star review of The Comedy About a Bank Robbery 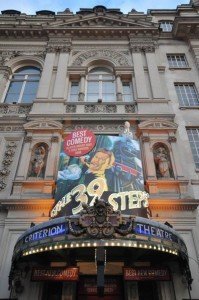 The Criterion Theatre London
In 1870 following the acquisition of the site of the 17th century White Bear Inn and adjoining properties between Jermyn Street and Piccadilly Circus (known as Regent Circus). Caterers Spiers and Pond commissioned Thomas Verity to design a development which would consist of a substantial restaurant, dining rooms, ballroom, and galleried concert hall. Having started building work it was decided to change the proposed concert hall, (though retaining the composers names which still line the tiled staircases to this day), to a theatre which opened on 21st March, 1874.

The opening productions were An American Lady, written and performed by the manager Henry J Byron and a piece by W.S. Gilbert titled Topseyturveydom.

Under the management of Charles Wyndham, The Criterion established itself as the leading comedy house in London. Between 1920 and 1940 productions included Musical Chairs with John Gielgud, and in 1936 a three year run of French Without Tears which founded the career of Terence Rattigan.

During the Second World War The Criterion was taken over by the BBC. As an underground theatre it was suitable for light entertainment both recorded and live. Following the war, were productions such as Beckett’s Waiting for Godot and pieces by Anouilh, Dario Fo and others.

In the 1970′s the Criterion Theatre site was proposed for redevelopment, which caused significant public protest as people feared the theatre would be gone forever. Throughout the 1970s and early 1980s the Equity Save London’s Theatre Committee organised demonstrations. Notable campaigners from the world of stage included John Gielgud, Diana Rigg, Edward Woodward, Robert Morley and Prunella Scales. Finally, the theatre’s future was secured, although subsequently the theatre closed for three years from 1989, until reopening in October 1992 while the Criterion block that stands today, was constructed around it. With significant refurbishment both backstage, and in the front of house, The Criterion Theatre has retained an almost perfectly preserved Victorian auditorium. From 1996 to 2005 The Reduced Shakespeare Company entranced audiences with their 30+ snippets from Shakespeare, even with one performance being performed backwards! The theatre retains its Victorian auditorium which ensures the Criterion retains an intimate and atmospheric presence for those on stage and in the audience. The 39 Steps closed on Saturday 5th September 2015.

The Comedy About a Bank Robbery today announces an extension of its Olivier Award-nominated show to run until Sunday 3rd May 2020, as it celebrates its third birthday in the West End. Tickets for the new booking period are now on sale. Tonight marks the 1,423rd performance at The Criterion, the 7,115th theft of the diamond and the 10,584th appearance of the seagulls! The cast includes Samson Ajewole (Cooper), Jenna Augen (Ruth Monaghan), Jack Baldwin (Officer Randal Shuck), Leonard Cook … END_OF_DOCUMENT_TOKEN_TO_BE_REPLACED

Breaking into its 3rd year, Mischief Theatre's smash-and-grab hit The Comedy About A Bank Robbery is a fast, fabulous comedy caper and the funniest show in the West End. Summer 1958. Minneapolis City Bank has been entrusted with a priceless diamond. An escaped convict is dead set on pocketing the gem with the help of his screwball sidekick, trickster girlfriend… and the maintenance man. With mistaken identities, love triangles and hidden agendas, even the most reputable can't be trusted. In a … END_OF_DOCUMENT_TOKEN_TO_BE_REPLACED

Mischief Theatre today announces new cast members and 2019 extension for the critically acclaimed and Olivier Award-nominated The Comedy About A Bank Robbery. Due to continued high demand, The Comedy About A Bank Robbery announces an extension of their run until 3 November 2019, as they approach their third year in the West End. Joining the cast from 18 December 2018 are Julia Frith (Caprice Freeboys), Liam Jeavons (Mitch Ruscitti), Jack Whittle (Sam Monaghan) and Jean-Luke Worrell (Warren … END_OF_DOCUMENT_TOKEN_TO_BE_REPLACED

How many times have they tried to steal that diamond... one thousand times! The Comedy About A Bank Robbery has been making mischief and madness at the Criterion Theatre since it opened in 2016 having broken into its third year in April. This Sunday the cast and creatives were let out on day release to celebrate the 1000th West End performance with a party and cake! There’s still plenty more swag to be had so catch them while you can - booking until April 2019. Mischief Theatre’s … END_OF_DOCUMENT_TOKEN_TO_BE_REPLACED

It’s been five years since the phenomenon that is The Play That Goes Wrong erupted into being in a little theatre above a pub. Since that moment Mischief Theatre have gone from strength to strength, firmly establishing themselves in the national theatre-going conscious as purveyors of comedy sans pareil. Wisely, they have deviated from the original formula of collapsing sets and forgotten lines and used their seemingly boundless versatility to shoot off in a new direction. The Comedy About a … END_OF_DOCUMENT_TOKEN_TO_BE_REPLACED