Grittier and more electrifying than ever before, the world’s best-loved musical returns to London, starring Peter Andre as Vince Fontaine and Jason Donovan as Teen Angel in selected performances.

After a whirlwind summer romance, leather-clad greaser Danny and girl-next-door Sandy are unexpectedly reunited when she transfers to Rydell High for senior year. But can they survive the trials and tribulations of teenage life and find true love once more?

Bursting with hits including Summer Nights, Greased Lightnin’, Hopelessly Devoted to You and You’re the One That I Want, this thrilling new production is directed by the Leicester Curve’s Artistic Director Nikolai Foster, and choreographed by the legendary Arlene Phillips. 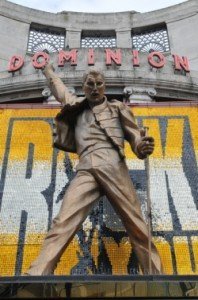 With the show’s stellar leads, Andrew Polec and Christina Bennington, previously announced, the full company has now been cast for the 2018 West End run of Jim Steinman’s Bat Out Of Hell The Musical, winner of the Evening Standard Radio 2 Audience Award for Best Musical 2017. Performances will begin at the Dominion Theatre in London on 2 April, with a Gala Night on Thursday 19 April. The cast of Bat Out Of Hell The Musical at the Dominion Theatre will be led by Andrew Polec, winner of the Joe … END_OF_DOCUMENT_TOKEN_TO_BE_REPLACED

The West End season of the award-winning Bat Out Of Hell - The Musical must end at the Dominion Theatre on Saturday 5 January 2019. Meanwhile, the North American Tour opens in Toronto, Canada on 16 October 2018 and the German language premiere will open in Oberhausen, Germany on 2 November 2018. Jim Steinman’s Bat Out Of Hell – The Musical wowed critics and public alike when it played limited seasons at Manchester Opera House, London Coliseum and Toronto’s Ed Mirvish Theatre in 2017, and has … END_OF_DOCUMENT_TOKEN_TO_BE_REPLACED

Winner of the Evening Standard Radio 2 Audience Award for Best Musical, Jim Steinman’s Bat Out Of Hell - The Musical has already broken box office records at London’s Dominion Theatre, taking £350,000 on the first day of on-sale. The musical returns to London’s West End in 2018, with performances at the Dominion Theatre from Monday 2 April. Bat Out Of Hell - The Musical wowed critics and public alike when it played limited seasons at Manchester Opera House and London Coliseum earlier this … END_OF_DOCUMENT_TOKEN_TO_BE_REPLACED

London’s Dominion Theatre, home to Christopher Wheeldon’s stunning reinvention of the Oscar® winning Hollywood musical An American in Paris, has completed a £6 million restoration and unveils a brand new double-sided LED screen on Tottenham Court Road, the largest and highest resolution projecting screen on the exterior of a West End theatre. The extensive restoration of this landmark Grade II listed building, which sits majestically at the junction of Tottenham Court Road, Oxford Street and … END_OF_DOCUMENT_TOKEN_TO_BE_REPLACED

In 1973, Dolly Parton wrote and recorded a song for her one time partner and mentor Porter Wagoner. Although Dolly had two No 1 hits with the song on the the Billboard Hot Country Songs Chart, the track wasn’t that well known until 1992 when a singer called Whitney Houston recorded a cover for a movie she was was starring in. The song was “I Will Always Love You” and the movie was turned into a musical of the same name in 2012. Of course, I am talking about The Bodyguard which has opened for a … END_OF_DOCUMENT_TOKEN_TO_BE_REPLACED

Ben Richards will join previously announced Beverley Knight in the international hit musical The Bodyguard when it returns to the West End at the Dominion Theatre for a limited six month run in July this year. Richards will play Frank Farmer, Rachel Marron’s bodyguard, alongside Beverley Knight in the leading role of the Oscar-nominated superstar Marron. Performances begin at the Dominion Theatre on 15 July 2016 for this strictly limited season to 7 January 2017. Former Secret Service agent … END_OF_DOCUMENT_TOKEN_TO_BE_REPLACED