Duchess Theatre London Tickets for The Play that Goes Wrong 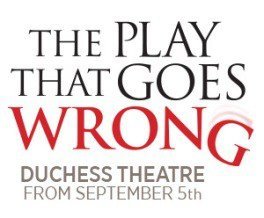 Fawlty Towers meets Noises Off in this new hit comedy direct from the West End. The Cornley Polytechnic Drama Society attempt to put on a 1920s murder mystery, but as the title suggests, everything that can go wrong… does, as the accident-prone thesps battle on against all the odds to get to their final curtain call.

SELECTED RECENT PRODUCTIONS
2000 In January the Duchess became a Really Useful Theatre when Lord Lloyd-Webber’s Really Useful Group and Bridgepoint Capital purchased Stoll Moss Theatres Ltd.
2001 The auditorium was transformed to recreate the Cottesloe in the round layout for Blue/Orange by Joe Penhall, with Bill Nighy and the original National Theatre cast. This was followed by the Irish comedy Alone it Stands.
2002 Life After George with Stephen Dillane. The Glee Club and David Hare returned to the West End with Via Dolorosa prior to the opening of Alan Ayckbourn’s Damsels in Distress.
2003 The year started with Gyles Brandreth’s Zipp! Through the Leaves and Harold Pinter’s Betrayal.
2004 Hershey Felder as George Gershwin Alone. Coyote on a Fence and Novel Theatre Company’s adaptation of Little Women.
2005 David Suchet in Man and Boy by Terence Rattigan, The Birthday Party revived with Eileen Atkins and Henry Goodman, and Maureen Lipman in Glorious by Peter Quilter.
2006 Stones in his Pockets by Marie Jones, starring Conrad Kemp and John Cronin.
2007 The musical Buddy - The Buddy Holly Story.
2009 Plague Over England with Michael Feast and Celia Imrie, Collaboration and Taking Sides, with Michael Pennington and David Horowitz, and Endgame with Mark Rylance, Simon McBurney, Miriam Margolyes and Tom Hickey.
2010 Morecambe starring Bob Golding, Ghosts starring Lesley Sharp, The Fantasticks, and Krapp's Last Tape starring Michael Gambon.
2011 Simon Gray's Butley starring Dominic West and Paul McGann, Ruby Wax: Losing It, and The Pitmen Painters.
2012 The RSC's Written on the Heart, The Hurly Burly Show, Our Boys starring Laurence Fox and Arthur Darvill.
2013 Alan Bennett's Untold Stories starring Alex Jennings, August Wilson's Fences starring Lenny Henry and Bertolt Brecht's The Resistible Rise of Arturo Ui starring Henry Goodman.
2014 Bakersfield Mist starring Kathleen Turner, then The Play That Goes Wrong

The Play That Goes Wrong would have been delighted to announce its 1000th performance. However, in true goes wrong fashion, producers of the hit play have realised that due to an incompetent miscount, they have missed their landmark performance which was last night and so are celebrating their 1001st performance tonight. Awarded the 2014 Whatsonstage.com Best New Comedy and the 2015 Olivier Award for Best New Comedy, The Play That Goes Wrong continues to thrive in the West End. It is a … END_OF_DOCUMENT_TOKEN_TO_BE_REPLACED

The Play That Goes Wrong is a phenomenon, a full-on slapstick comedy performed and written with such a heads down let’s gallop on through this verve that it’s hard not to get swept along. If there’s a joke within a quarter mile radius or a bit of physical comedy that could have been left out then they are having it. Everything from the cast to the set is used to the maximum, and it’s great fun to experience. From the moment you arrive at the Duchess Theatre, you are immersed in the play. My … END_OF_DOCUMENT_TOKEN_TO_BE_REPLACED

The producers of THE PLAY THAT GOES WRONG have announced that something has gone stunningly right. With their advertising campaign encouraging people to 'SAVE MONEY - DON'T COME' which evidently has not worked, the show that they capitalised in the West End for £250,000 and opened at the Duchess Theatre at the beginning of September, written by and starring unknown out of work actors, has already recouped all of its production costs and is now turning a weekly profit. It is an extraordinary … END_OF_DOCUMENT_TOKEN_TO_BE_REPLACED

Following a successful UK tour, The Play That Goes Wrong will open at The Duchess Theatre on 14th September 2014, with previews from 5th September, 2014. Fawlty Towers meets Noises Off in this new hit comedy Direct from the West End - See more at: The Cornley Polytechnic Drama Society attempt to put on a 1920's murder mystery, but as the title suggests, everything that can go wrong… does, as the accident-prone thesps battle on against all the odds to get to their final curtain call. This … END_OF_DOCUMENT_TOKEN_TO_BE_REPLACED

The Resistible Rise of Arturo Ui was written in 1941 by Bertolt Brecht, a German Marxist theatre practitioner, playwright and poet, while in exile in Finland. I was familiar with his style (known as ‘Epic Theatre’) through my university days. Though fascinated with his work during my studies, my initial thoughts were ‘how would a modern day West End audience relate to it?’ Although it’s not essential for the audience to know the details of Nazi Germany or Brecht’s practice methods, it was … END_OF_DOCUMENT_TOKEN_TO_BE_REPLACED