Direct from a sold-out season at Kiln Theatre the five star, hit play, The Son, is now playing at the Duke of York’s Theatre for a strictly limited season.

Written by the internationally acclaimed Florian Zeller (The Father, The Mother), lauded by The Guardian as ‘the most exciting playwright of our time’, The Son is directed by the award-winning Michael Longhurst.

I’m telling you. I don’t understand what’s happening to me.

Nicolas is going through a difficult phase after his parents’ divorce. He’s listless, skipping school, lying and thinks that moving in with his father and his new family may help. A fresh start. When he doesn’t settle there either, he decides that going back to his mother’s may be the answer. When change feels like the only way to survive, what will he do when the options begin to run out?

Please note: The Son deals with issues surrounding mental health in teenagers and contains scenes that some audience members may find upsetting or disturbing. 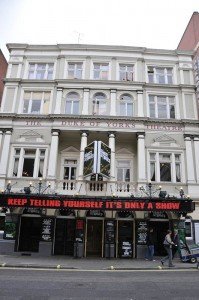 The Girl on the Train starring Samantha Womack as Rachel Watson will transfer to London’s Duke of York’s Theatre, St Martin’s Lane for a limited run from 23rd July to 17th August 2019. The gripping thriller, based on the internationally acclaimed number one best-selling novel by Paula Hawkins and the Dreamworks film has been breaking box office records and playing to packed houses on a major tour since the beginning of the year. Samantha plays Rachel Watson who longs for a different life. … END_OF_DOCUMENT_TOKEN_TO_BE_REPLACED

Direct from a sold-out season at Kiln Theatre the five star, hit play, The Son, transfers to the Duke of York’s theatre for ten weeks only from 24 August 2019. Written by the internationally acclaimed Florian Zeller, lauded by The Guardian as ‘the most exciting playwright of our time’, The Son is directed by the award-winning Michael Longhurst and forms the final part of the critically acclaimed trilogy with The Father and The Mother. I’m telling you. I don’t understand what’s happening to … END_OF_DOCUMENT_TOKEN_TO_BE_REPLACED

Henrik Ibsen’s classic examination of a country in a state of political flux has been adapted by Duncan Macmillan (People, Places and Things, 1984, Every Brilliant Thing). The sharply prescient play will be directed by Ian Rickson (Jerusalem, The Birthday Party, Translations), with set and costumes by Rae Smith, lighting by Neil Austin, music by Stephen Warbeck, sound by Gregory Clarke and casting by Amy Ball CDG. ‘‘Now I see that love is selfish. It makes you a country of two. At war with … END_OF_DOCUMENT_TOKEN_TO_BE_REPLACED

Following a critically acclaimed, sold-out season at the Almeida in 2016-17, Robert Icke’s new adaptation of Mary Stuart transfers to the Duke of York’s Theatre in London’s West End from Saturday 13 January for a limited run. The production will then visit Theatre Royal Bath from Wednesday 4 – Saturday 14 April, Salford Lowry from Tuesday 17 – Saturday 21 April and Cambridge Arts Theatre from Monday 23 – Saturday 28 April 2018. Schiller's political tragedy takes us behind the scenes of some … END_OF_DOCUMENT_TOKEN_TO_BE_REPLACED

In the final line in Tennessee William’s masterpiece, A Streetcar Named Desire the tragic heroine Blanche says “I’ve always depended on the kindness of strangers,” a theme that is also central to the earlier The Glass Menagerie. The most poignant scene in this sad but brilliant play is when Laura realises that Jim O’Connor introduced to her as a stranger is in fact, the same person that she had had a crush on in High School. They reminisce - but his kindness in dancing with her and kissing her … END_OF_DOCUMENT_TOKEN_TO_BE_REPLACED