The Woman In Black
Since 1989, over 7 million people have lived to tell the tale of one of the most exciting, spooky, gripping and successful theatre events ever staged.

Unanimously acclaimed by the critics, Stephen Mallatratt's adaptation of Susan Hill's best selling novel combines the power and intensity of live theatre with a cinematic quality inspired by the world of film noir. It is a formula that provides audiences with an evening of unremitting drama as they are transported into a terrifying and ghostly world.

Evenings: Monday to Saturday 8.00pm
Matinees: Tuesday 3.00pm and Saturday 4.00pm
Running Time: 2 hours
Age Restrictions:  The Woman in Black is on the National Curriculum for English and Drama, so some performances (especially matinees and on weekdays) are likely to have school groups in attendance.

Important Info: This play is not suitable for those with a nervous disposition or who cannot handle sudden shocks. Please be advised that there is a large possibility of school groups being present at The Woman In Black, especially for Monday to Thursday performances. 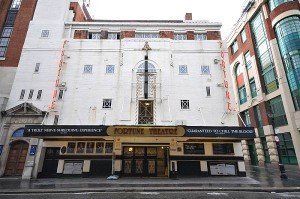 The Fortune Theatre opened in 1924, the first theatre to be built in London following the conclusion of the First World War. The theatre is situated on the site of the old Albion Tavern.

The Fortune Theatre’s original building plans were discovered by Richard L. Hay, who used the plans to design and build the Elizabethan Stage at the Oregon Shakespeare Festival in Ashland, Oregon. The Fortune Theatre once described as This most intimate of theatres opened on Saturday, 8th November 1924.

The theatre’s opening play was Sinners which was penned by Laurence Cowen, who had also commissioned the architect to design the theatre. Unfortunately for Cowen the play only ran for a short period of two weeks! During the following few years there were a number of other productions, including amateur shows in the 1930s. During World War II the venue was used by ENSA, the concert party group of the Armed Forces.

Since that time the Fortune Theatre has had many notable actors and actresses perform on its stage. These include Dame Judi Dench, Dirk Bogarde and Maureen Lipman, who portrayed the Joyce Grenfall in her one woman show, Re-Joyce. Variety stars Flanders and Swann performed at The Fortune Theatre and was home to the revue from Cambridge, Beyond The Fringe. This provided us with the original line-up of Alan Bennett, Peter Cook, Dudley Moore and Jonathan Miller. Other significant shows that ran at the Fortune include Mr Cinders, Double Double, Nunsense and Dangerous Obsession.

The Fortune Theatre is associated strongly with its current production The Woman In Black, which has become a mainstay of the West End. This enigmatic and brilliant play was first seen at the Fortune in 1989. The theatre and the show achieved the landmark of 5000 performances in July 2001 where there was a party, which was held in the Stalls Bar and the auditorium!

For many years, The Fortune Theatre was independently owned, but in December 2001, it was added to the Ambassador Theatre Group and joined ATG’s other West End theatres.

Find tickets for The Woman In Black

Perform Productions is delighted to announce the cast and creative team for the West End premiere of Magical Merlin this October half-term. The spellbinding family musical, which promises to be full of fun and laughter, plays daytime performances at The Fortune Theatre in Covent Garden from Monday 24 to Sunday 30 October 2022. West End favourite Ben Stock (Chitty Chitty Bang Bang, Disney’s Beauty and the Beast, Grease) plays the lead role of Merlin with Stuart Maciver (Wicked, Evita) as … END_OF_DOCUMENT_TOKEN_TO_BE_REPLACED

As Susan Hill’s The Woman In Black at The Fortune Theatre, London prepares to celebrate its 30th Anniversary in the West End in June 2019, PW Productions are delighted to announce that from Tuesday 19th March 2019 the show will star Stuart Fox as ‘Arthur Kipps’ and Matthew Spencer as ‘The Actor’. Having previously played the role of ‘Arthur Kipps’ at the Fortune Theatre and during the UK Tour, Stuart Fox returns to “The Woman in Black”. His other West End credits include “Woman in Mind” at … END_OF_DOCUMENT_TOKEN_TO_BE_REPLACED

PW Productions are delighted to celebrate 12,000 performances of Susan Hill’s THE WOMAN IN BLACK on Saturday 22 September 2018 at The Fortune Theatre, London. THE WOMAN IN BLACK currently stars Richard Hope as ‘Arthur Kipps’ and Mark Hawkins as ‘The Actor’. Producer Peter Wilson said today, “To have achieved 12,000 performances may not be unique, but it is remarkable. Susan Hill’s great story allied to Robin Herford’s carefully inspired direction of Stephen Mallatratt’s brilliant adaptation … END_OF_DOCUMENT_TOKEN_TO_BE_REPLACED

PW Productions are delighted to announce that from Tuesday 22 May 2018, Susan Hill’s THE WOMAN IN BLACK at The Fortune Theatre, London will star Richard Hope as ‘Arthur Kipps’ and Mark Hawkins as ‘The Actor’. Richard Hope’s theatre credits include: “Queen Anne”; “The Park”; “The History Boys”; “Orlando”; “King Lear”; “Much Ado About Nothing”; “Don Juan”; “Hamlet” and “Hitchhiker’s Guide to the Galaxy” among others. Richard’s television credits include: “Poldark”, “Broadchurch”, “Midsomer … END_OF_DOCUMENT_TOKEN_TO_BE_REPLACED

PW Productions are delighted to announce that from Tuesday 29 August 2017, Susan Hill’s THE WOMAN IN BLACK at The Fortune Theatre, London will star Terence Wilton as ‘Arthur Kipps’ and James Byng as ‘The Actor’. Terence Wilton’s recent theatre credits include ‘Lord Lonsdale’ in “William Wordsworth” (Theatre By The Lake); “Cat On A Hot In Roof” (Theatre Royal Northampton) and “The Sound of Music” (Regent’s Park Open Air Theatre). For the RSC he recently played ‘Baptista Minola’ in “The Taming … END_OF_DOCUMENT_TOKEN_TO_BE_REPLACED

Stuart Fox (Woman in Mind, Vaudeville; The Normal Heart, Royal Court and Albery; Fear and Loathing in Las Vegas, Fortune Theatre) and Joseph Chance (Jeeves & Wooster, UK and Far East Tour; Wallander) have been cast in the unanimously acclaimed stage production of The Woman in Black at the Fortune Theatre. Fox returns to play the Arthur Kipps having first played the role two years ago. Celebrating its 27th anniversary in the West End earlier this year, Stephen Mallatratt’s adaptation of … END_OF_DOCUMENT_TOKEN_TO_BE_REPLACED

On Monday 6th June, The Woman in Black celebrates its 27th anniversary in the West End at the Fortune Theatre. Stephen Mallatratt’s adaptation of Susan Hill’s best-selling novel has terrified over 7 million theatregoers since it first opened. Robin Herford’s gripping production is a brilliantly successful study in atmosphere, illusion and controlled horror. The West End show and tour are produced by PW Productions - the company behind the New Arts Theatre at Leicester Square. Now, the … END_OF_DOCUMENT_TOKEN_TO_BE_REPLACED