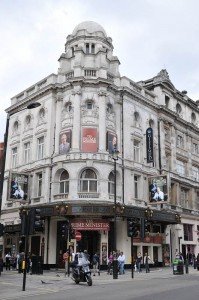 Now well into its highly successful run at the Gielgud Theatre, The Curious Incident of the Dog in the Night-Time remains beautifully delivered, worthy of all its accolades. Adapted by Simon Stephens from the bestselling novel by Mark Haddon, we enter the world of a 15-year-old boy named Christopher Boone (Sion Daniel Young) who has Asperger’s Syndrome, following his investigation into the mysterious killing of a neighbourhood dog. Originally written from … END_OF_DOCUMENT_TOKEN_TO_BE_REPLACED

In 2013, The Curious Incident of the Dog in the Night-Time won 7 Olivier Awards including Best Play. It is based on Mark Haddon’s award-winning novel, adapted by Simon Stephens and directed by Marianne Elliott. Sarah Woodward plays the role of 'Siobhan and Ensemble’. Sarah has extensive credits on stage, film and television. Her theatre credits include: National Theatre's The Cherry Orchard, The Hour We Knew Nothing of Each Other, Present Laughter, Wild Oats, The Sea. RSC's The Tempest, … END_OF_DOCUMENT_TOKEN_TO_BE_REPLACED