Disney's The Lion King at the Lyceum Theatre
Evenings: Tuesday to Saturday 7.30pm
Matinees: Wednesday, Saturday and Sunday 2.30pm
Running Time: 2 hours 45 minutes
Age Restrictions: The Lion King is recommended for children aged 7 and over.
Under-3s will not be admitted.
Show Opened: 12th October 1999
Important Info: PLEASE NOTE: strobe lighting is used several times during the performance. Children under the age of 3 will not be admitted. Children over 3 will be admitted, but they must be able to sit in their own seat quietly throughout the performance. If they become restless, they may be asked to leave the auditorium. 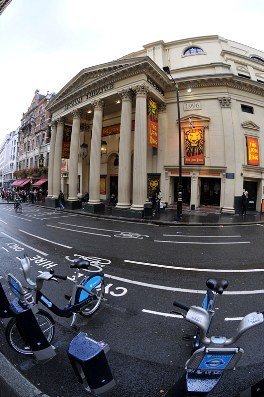 The Lyceum Theatre London
Throughout its history, dating back to 1772, when the Society of Arts founded ‘a Room for Exhibitions and Concerts’ near the current location, the Lyceum has adapted to changing fashions and needs. When first built the theatre housed a wide range of entertainment, including hot air balloons, an animal circus, and a fireworks display. In 1802 Madame Tussaud’s first waxworks exhibition was displayed here. The theatre at one time became a temporary home for the Theatre Royal Drury Lane when it was burned down.

After the Lyceum suffered a similar fate in 1830, the architect Samuel Beazley designed the new theatre and his magnificent portico is still in view today. In 1834 the Lyceum’s productions were hampered by restrictions prohibiting so-called minor theatres from staging drama without a musical interlude, a legacy from the early days following Charles II’s restoration. However, when the 1834 Licensing Act removed these frustrating restrictions, the theatre then presented Shakespeare and the classics. A series of successful extravaganzas were staged, but it was not until 1878 that the Lyceum firmly established itself at the height of the industry.

It was in 1878 that Henry Irving took over the lease of the property and Ellen Terry became his leading lady. This famous partnership had the two nick-named ‘Lord and Lady of the Lyceum’. Unfortunately, in 1898 poor health forced Irving to relinquish control of the theatre, ending a brilliant era. When no buyer could be found by 1904 for the theatre it was decided to demolish and rebuild it. Bertie Crew designed the new building, which was at first used for music hall entertainment.

From 1909-38 the Melville Brothers produced a successful series of spectacular melodramas and Princesses Margaret and Elizabeth saw their first pantomime at the Lyceum in 1934. In 1939 the new owners were London City Council, and they wanted to replace the theatre with a roundabout for traffic. Ellen Terry’s great nephew John Gielgud brought the wheel full circle with 6 farewell performances of Hamlet, proclaiming ” Long live the Lyceum!” The triumphal declaration seemed optimistic until the war intervened and demolition plans were shelved. In 1945 Mecca Ballrooms took over the lease and today’s raked auditorium was then a large dance floor.

By 1986 the Lyceum was again empty and not used but less than ten years later this decline was stopped. Apollo Leisure stepped forward to rescue the theatre in 1994 and securing permission to restore the theatre to its former glory. Today, the theatre has state of the art facilities and an opulent red and gold auditorium. With Jesus Christ Superstar and now The Lion King taking up residence, it seems the ‘Lyceum roar’ will again echo in this famous theatre.

The West End production of Disney’s The Lion King celebrates its 16th birthday today. The multi-award-winning musical opened at London’s Lyceum Theatre on 19th October 1999 and has since been seen by over twelve million people. It is the fourth longest-running musical currently playing in the West End, behind Les Miserables, The Phantom of the Opera and Mamma Mia!, and the sixth longest-running West End musical of all time. The Lion King is the powerful and moving story of Simba – the epic … END_OF_DOCUMENT_TOKEN_TO_BE_REPLACED

Disney’s award-winning musical The Lion King will be holding open auditions in London for roles in the West End production which is celebrating 16 years at London’s Lyceum Theatre. Auditions for male and female singers will take place on Saturday 7th November, 2015 at Bloomsbury Central Baptist Church, Shaftesbury Avenue, while auditions for male and female dancers will take place on Saturday 21st November, 2015 at Moonshot Centre, New Cross. Morning registration is at 10am and it is advised … END_OF_DOCUMENT_TOKEN_TO_BE_REPLACED

After the success of dedicated Autism-Friendly Performances in 2013 and 2014, a third dedicated performance of Disney’s THE LION KING has been announced for Sunday 30th August 2015 at 1:30pm. Tickets now on sale. THE LION KING staged the West End’s first dedicated Autism-Friendly Performance in April 2013. Working with The National Autistic Society, the UK’s leading charity for people with autism and their families, The Walt Disney Company modified the performance to make it more appropriate … END_OF_DOCUMENT_TOKEN_TO_BE_REPLACED

Disney's The Lion King Celebrates 15 Years in London on Sunday 19th October 2014 CRITICALLY-ACCLAIMED PRODUCTION REMAINS THE WEST END’S MOST POPULAR MUSICAL WITH OVER 810,000 GUESTS PER YEAR DISNEY GIVES AWAY 1500 TICKETS FOR THIS SUNDAY’S ANNIVERSARY PERFORMANCE TO LONDON THEATREGOERS FINAL DATES ARE ALSO ON SALE FOR THE LION KING’S SELL-OUT UK TOUR, WHICH WILL HAVE BEEN SEEN BY OVER 1.8 MILLION TITLE SET TO BE LICENSED EXCLUSIVELY TO SCHOOLS IN 2015 On Sunday 19th October … END_OF_DOCUMENT_TOKEN_TO_BE_REPLACED

The production company behind The Lion King, Disney, are possibly the closest thing mankind has to the makers of magic, and their musical films bring pleasure universally to young and old. It seems that after 15 years in London, they are still getting that magic recipe just right, as the theatre was packed out on this Wednesday night, and I'm told that's the norm. And it's not surprising. The Lion King is truly a thing of wonder, and yet not quite in the normal 'Disney way'. There is little in … END_OF_DOCUMENT_TOKEN_TO_BE_REPLACED

14-week ‘Cub School’ nurtures the talents required to play vital roles in The Lion King. Auditions to be held in London on Saturday 20th September 2014 Open auditions are to be held for ‘Cub School’ – the programme where children who have the potential to play Young Simba and Young Nala in Disney’s musical THE LION KING have the opportunity to hone the skills required to take on these challenging roles. ‘Cub School’ is a free, fourteen-week performance-training programme from which … END_OF_DOCUMENT_TOKEN_TO_BE_REPLACED

DISNEY’S ‘THE LION KING’ HOLDS OPEN AUDITIONS FOR CHILDREN TO JOIN ITS ‘CUB SCHOOL’ PROGRAMME. 14-week ‘Cub School’ nurtures the talents required  to play vital roles in THE LION KING Auditions to be held in London on Sunday 16th March 2014 Open auditions are to be held for ‘Cub School’ – the programme where children who have the potential to play Young Simba and Young Nala in Disney’s musical THE LION KING have the opportunity to hone the skills required to take on these … END_OF_DOCUMENT_TOKEN_TO_BE_REPLACED