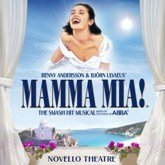 Set on a Greek island paradise, this story of love, friendship and identity is cleverly told through the timeless songs of Abba. Join the ultimate feel-good party as Mamma Mia! celebrates 15 years as the world's sunniest and most exhilarating smash-hit musical.

Sophie’s quest to discover the father she’s never known brings her mother face to face with three men from her distant romantic past on the eve of a wedding they’ll never forget - all set to the timeless songs of Abba.

This irresistible, sunny, funny comedy musical has thrilled over 54 million people worldwide and there's never been a better time to see it. Whatever age you are, you can‘t help but have the time of your life at Mamma Mia!

The Novello Theatre London: The theatre was constructed as one of a pair with the Aldwych Theatre, with each theatre being either side of the Waldorf Hotel, with both theatre being designed by W G R Sprague. The theatre opened on 22nd May, 1905 as the Waldorf Theatre and was renamed the Strand Theatre in 1909.

It was renamed again in 1911 as the Whitney Theatre before being re-named the Strand Theatre in 1913. In 2005, the theatre was renamed by owners Delfont Mackintosh as the Novello Theatre in honour of Ivor Novello.

The black comedy Arsenic and Old Lace had a run of 1337 performances in the 1940s, and Sailor Beware ran for 1231 performances from 1955. Stephen Sondheim”s musical A Funny Thing Happened on the Way to the Forum opened on the same day as the assassination of the US President Kennedy, and then running for almost two years. In 1971 the comedy No Sex Please We’re British opened, remaining for over 10 years of its 16-year run before it transferred to the Garrick Theatre in 1982.

The theatre was extensively renovated in 1930 and once again in the early 1970s. For its 100th anniversary in 2005, the theatre had another extensive refurbishment. The current capacity is around 1,050. It reopened on 8th December 2005 with the Royal Shakespeare Company”s annual London season, playing to 4-week runs of Twelfth Night, A Midsummer Night’s Dream, The Comedy Of Errors and As You Like It concluding in March 2006.

Producer Judy Craymer is delighted to announce the new cast of the global smash hit musical MAMMA MIA! from Monday 10 October 2022 and the extension of its booking period to Saturday 30 September 2023 at London’s Novello Theatre, with ticket prices frozen and now on sale. The London cast will continue to star Mazz Murray as Donna, Josie Benson as Tanya, Gemma Goggin as Rosie and Stephen Beckett as Bill. They will be joined on Monday 10 October by Norman Bowman (Marius in Les Misérables, Sky … END_OF_DOCUMENT_TOKEN_TO_BE_REPLACED

The global smash hit musical will celebrate its 23rd birthday in London on 6 April 2022. MAMMA MIA! originally opened in London at the Prince Edward Theatre on 6 April 1999, before transferring to the Prince of Wales Theatre in 2004, and then to the Novello Theatre in 2012. The London production of MAMMA MIA! has been seen by over 9 million people and has broken box office records in all three of its London homes. The London cast stars Mazz Murray as Donna, Josie Benson as Tanya, Gemma … END_OF_DOCUMENT_TOKEN_TO_BE_REPLACED

The global smash hit musical MAMMA MIA! will return to London’s West End at the Novello Theatre on 25 August 2021. Now in its 23rd year in London, producer Judy Craymer is delighted to be welcoming people back to once again dance, jive and have the time of their lives! Judy Craymer said, “We cannot wait to get the full theatrical experience of MAMMA MIA! back into the West End and what better way to leave lockdown than to be transported to our sunny Greek idyll. MAMMA MIA! has to be the … END_OF_DOCUMENT_TOKEN_TO_BE_REPLACED

The global smash hit musical MAMMA MIA!, presented in Japan by Shiki Theatre Company by arrangement with Judy Craymer, Richard East and Björn Ulvaeus for Littlestar in association with Universal, opened at the Kanagawa Arts Center in Yokohama, Japan yesterday, 14 July 2020, and, by the roaring applause, the audience were clearly delighted to be back at the theatre. This is the very first production of MAMMA MIA! to open in the world post COVID-19. The opening had originally been planned for … END_OF_DOCUMENT_TOKEN_TO_BE_REPLACED

The global smash hit musical MAMMA MIA! celebrated its 20th anniversary in London’s West End at the Novello Theatre on Saturday 6th April. Now, in the musical’s 21 st year, the producers are delighted to announce some major cast changes in the London production from Monday 10th June 2019. Mazz Murray, who has previously played Tanya in the London production, will be returning to the musical, but this time as Donna, and Kirsty Hoiles will join her as Tanya. Also new to the musical will be Cameron … END_OF_DOCUMENT_TOKEN_TO_BE_REPLACED

The global smash hit musical MAMMA MIA! celebrated its 20th anniversary in London’s West End at the Novello Theatre on Saturday 6 April. Now, in the musical’s 21st year, the producers are delighted to announce some major cast changes in the London production from Monday 10 June 2019. Mazz Murray, who has previously played Tanya in the London production, will be returning to the musical, but this time as Donna, and Kirsty Hoiles will join her as Tanya. Also new to the musical will be Cameron Burt … END_OF_DOCUMENT_TOKEN_TO_BE_REPLACED

This play is, I must admit, intriguing stuff. Michael Aleen (Gwithian Evans) is a patient in a … END_OF_DOCUMENT_TOKEN_TO_BE_REPLACED

According to a friend who holidayed in Cornwall, “everything” in Cornwall is Cornish - that is to … END_OF_DOCUMENT_TOKEN_TO_BE_REPLACED