Phoenix Theatre London Tickets, News & Reviews for Come From Away

Discover the remarkable true story of a small town that welcomed the world. Winner of 4 Olivier Awards, including Best New Musical, Come From Away has taken the West End by storm. Playing to nightly standing ovations at London's Phoenix Theatre, Come From Away also continues sold-out, record-breaking engagements on Broadway, across the USA and in Canada.

This joyous new musical shares the incredible real-life story of the 7,000 air passengers from all over the world who were grounded in Canada during the wake of 9/11, and the small Newfoundland community that invited these 'come from aways' into their lives.

Awarded the Tony® for Best Direction of a Musical, Christopher Ashley's production guides audiences through a colourful and spirited cast of characters, brought to life by Olivier Award-winning writing team Irene Sankoff and David Hein. 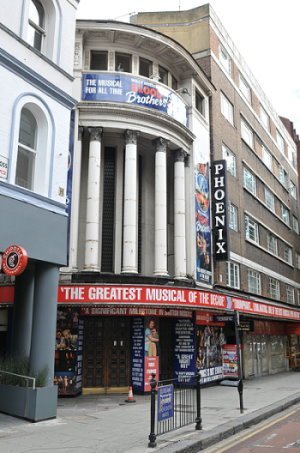 The multi-award-winning London production of global hit musical Come From Away will extend in the West End from September until the end of the year before holding its final performance at the Phoenix Theatre on Saturday 7 January 2023. By the time the West End company take their final bow, this critically acclaimed production will have played 1048 performances in London, 47 performances in Dublin and won many major UK Theatre Awards including the Olivier, Critics’ Circle and What’s On Stage … END_OF_DOCUMENT_TOKEN_TO_BE_REPLACED

Multi-award-winning, international hit musical Come From Away will make a welcome return to the West End booking from 22nd July, 2021. Come From Away tells the remarkable and inspiring true story of 7,000 stranded air passengers during the wake of 9/11, and the small town in Newfoundland that welcomed them. Cultures clashed and nerves ran high, but as uneasiness turned into trust, music soared into the night and gratitude grew into enduring friendships. On 11th September 2001, the … END_OF_DOCUMENT_TOKEN_TO_BE_REPLACED

Hit musical Come From Away will extend its run in the West End until 15th February 2020. Telling the remarkable true story of 7,000 stranded air passengers during the wake of 9/11, and the small town in Newfoundland that welcomed them, the critically acclaimed production recently earned great success at the Olivier Awards, winning “Best New Musical”, “Best Theatre Choreographer”, “Best Sound Design” and “Outstanding Achievement in Music”. This joyous new musical recounts the incredible true … END_OF_DOCUMENT_TOKEN_TO_BE_REPLACED

It almost sounds like something that should be protested against – a musical with lively choreography and joyous melodies, about what happened to thousands of people on planes that were forced to make emergency landings at Gander International Airport, Newfoundland, because United States airspace was closed in the immediate aftermath of the terrorist incidents in New York, Virginia and Pennsylvania on 11th September 2001. But the various stories contained in this tight and intense show are told … END_OF_DOCUMENT_TOKEN_TO_BE_REPLACED

Caroline Flack will star as Roxie Hart in CHICAGO from 10 December 2018 until the end of the show’s run at the Phoenix Theatre on 5 January 2019. Caroline joins YouTube sensation and star of RuPaul’s Drag Race Todrick Hall as Billy Flynn, Josefina Gabrielle as Velma Kelly, Mazz Murray as Mama Morton and Paul Rider as Amos Hart. Sarah Soetaert plays the role of Roxie Hart until 8 December. Caroline Flack is the presenter of the BAFTA award-winning Love Island. Her other presenting … END_OF_DOCUMENT_TOKEN_TO_BE_REPLACED

Today it has been announced that Rachel Tucker will be leading the West End cast in the hit Broadway musical Come From Away and it starts off in Dublin (Abbey Theatre) this December before landing at its new home, the Phoenix Theatre in late January 2019. The official opening night in London will be February 18th 2019. Held at Canada House in Trafalgar Square this morning, the production announced the cast and we were given a little insight on the story and how the production came to … END_OF_DOCUMENT_TOKEN_TO_BE_REPLACED

Casting has been announced for Come From Away the Tony Award-winning musical which will land in London for its long-awaited UK premiere at the Phoenix Theatre next year with performances from 30 January 2019, and a pre-West End engagement at the Abbey Theatre in Dublin from 6 December 2018 to 19 January 2019. Telling the remarkable true story of 7,000 stranded air passengers during the wake of 9/11, and the small town in Newfoundland that welcomed them, will be Jenna Boyd (Beulah and others), … END_OF_DOCUMENT_TOKEN_TO_BE_REPLACED