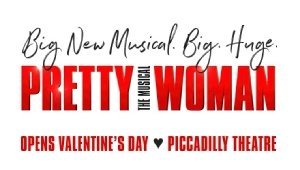 One of Hollywood’s most beloved romantic stories of all time is now coming to the West End!
Pretty Woman: The Musical features direction and choreography by two-time Tony Award® winner Jerry Mitchell (Kinky Boots, Legally Blonde, Hairspray), an original score by Grammy® winner Bryan Adams and his longtime songwriting partner Jim Vallance (“Summer of ’69”, “Heaven”) and a book by the movie’s legendary director Garry Marshall and screenwriter J.F. Lawton.

There have been a number of Royal Shakespeare Company productions including Edward II, starring Ian McKellen. Henry Fonda made his West End debut in the solo play Clarence Darrow and Y. The 1990s witnessed an expansion in musicals, ballet and dance, which resulted in the most successful commercial ballet season ever to play in the West End, Adventures in Motion Pictures production of Swan Lake.

The Piccadilly Theatre has been home to a season of plays directed by Sir Peter Hall, starring famous actors and actresses such as Dame Judi Dench, Julia McKenzie, Michael Pennington and Eric Sykes. It has also hosted the smash-hit musical Spend Spend Spend starring the Olivier award-winning actress, Barbara Dickson, the sell-out run of Shockheaded Peter, together with one of the most successful plays ever, Noises Off starring Lynn Redgrave. Most recently closing is Annie and before that Jersey Boys, which had transferred from the Prince Edward Theatre.

In the rich firmament of Juke Box Musicals Jersey Boys is surely the brightest star. The old cliché goes: if you remember the sixties you weren’t there. These days, all over the globe, we have radio shows devoted entirely to oldies, MTV and its ilk, wall-to-wall tribute acts and a burgeoning re-fascination with vinyl so it is entirely possible for anyone of whatever age to cut through the time-mists and hippy-fog to immediately recognise the two-and-a-half minute … END_OF_DOCUMENT_TOKEN_TO_BE_REPLACED

Every avid theatre-goer is familiar with the sensation. It’s one of the reasons we keep going back for more. It’s that soul-tingling feeling when a little-known actor or actress steps on to the stage, opens their mouth to sing, and the heavens fall silent. The silence is one of reverence, because we are witnessing the birth of a star. So it was last night at Annie at the New Wimbledon Theatre, the tour’s only London venue. All the orphans are perfectly cast. All the actors are outstanding, … END_OF_DOCUMENT_TOKEN_TO_BE_REPLACED

From Tuesday 18th August 2015, Matt Corner will play the role of Frankie Valli in the UK and Ireland tour of Tony, Olivier and Grammy Award-winning Best Musical JERSEY BOYS. Matt previously played the role at certain performances. Sam Ferriday as Bob Gaudio, Lewis Griffiths as Nick Massi and Stephen Webb as Tommy DeVito will continue in their roles. Michael Pickering will join the cast to play the role of Frankie Valli at certain performances. Also joining the tour cast will be Mark … END_OF_DOCUMENT_TOKEN_TO_BE_REPLACED