School of Rock the musical is now playing in London’s West End!

Based on the iconic, hit movie, this irresistible new musical follows Dewey Finn, a failed, wannabe rock star who decides to earn an extra bit of cash by posing as a supply teacher at a prestigious prep school. There he turns a class of straight –A pupils into a guitar-shredding, bass-slapping mind-blowing rock band. But can he get them to the Battle of the Bands without their parents and the school’s headmistress finding out? 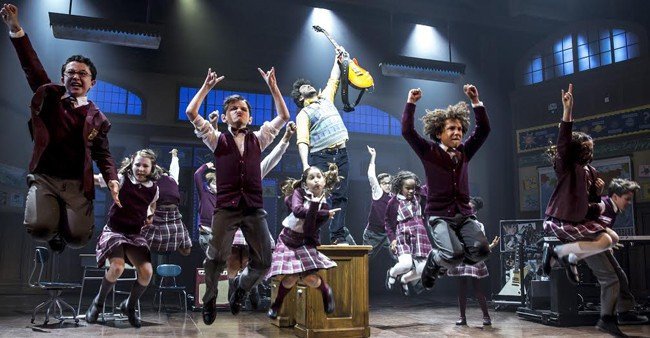 Photograph: Alex Brightman (centre) and the kids of School of Rock The Musical - Photo by Matthew Murphy

5-Star Review of School of Rock The Musical
At the end, we were all on our feet with a resounding standing ovation. It is one of the few productions on at the moment that I would happily go and see again. And again.
Review by Ruth Gledhill

5-Star Review of School of Rock The Musical
With plenty of eagerness and heart, this unapologetically positive musical is well worth seeing – and hearing. The transformative power of music is inspirational in this splendid show.
Review by Chris Omaweng

School of Rock – The Musical has received the following four Tony Nominations - Best Musical, Best Performance by a Leading Actor in a Musical - Alex Brightman, Best Book of a Musical - Julian Fellows and Best Original Score - Andrew Lloyd Webber and Glenn Slater. On hearing the 2016 nominations being announced, Andrew Lloyd Webber said: “This is fantastic. We have just had Jack Black see our show and proclaim it ‘A Broadway Masterpiece’. Now we get these nominations! We are … END_OF_DOCUMENT_TOKEN_TO_BE_REPLACED

Stevie Nicks, the Queen of Rock N’ Roll, made her Broadway debut last night (26th April 2016) at School of Rock The Musical. The Grammy Award-winning Fleetwood Mac singer surprised the audience at the Winter Garden Theatre when she took the stage and sang “Rhiannon” with the smash hit Andrew Lloyd Webber musical’s kid band. “To be in the presence of these kids that are so amazing that honestly sometimes I close my eyes and I’m not sure that it’s not Fleetwood Mac. It’s very trippy. They are … END_OF_DOCUMENT_TOKEN_TO_BE_REPLACED

Andrew Lloyd Webber’s School Of Rock smashes Broadway Box Office records as UK search begins for the West End Kids cast. Andrew Lloyd Webber’s new musical School of Rock, with book by Julian Fellowes, based on the 2003 Jack Black movie, has broken the house record at Broadway’s Winter Garden Theatre, grossing more than US$1.5 million dollars, in a standing room only sell out during Christmas week. This surpasses the previous record of US$1.36 million held by Mamma Mia. This is the … END_OF_DOCUMENT_TOKEN_TO_BE_REPLACED