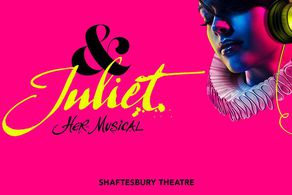 & Juliet is the irreverent and fun-loving new West End musical that asks: what if Juliet's famous ending was really just her beginning? What if she... wrote her own story?

& Juliet soars with some of the biggest pop anthems of the last 30 years from acclaimed songwriter Max Martin, including Baby One More Time, Everybody (Backstreet's Back), Love Me Like You Do and Can't Feel My Face, all brilliantly arranged by the Tony and Grammy Award-winning orchestrator Bill Sherman.

This timely and vibrant new musical is directed by Luke Sheppard (In the Heights) with a story by David West Read (Netflix's Schitt's Creek), choreography from Jennifer Weber and set design from Soutra Gilmour.

A riotous comic blast of fun and glorious pop music, & Juliet proves when it comes to love, there's always life after Romeo...

The Shaftesbury Theatre London
The theatre was designed for the brothers Walter and Frederick Melville by Bertie Crewe and first opened on 26th December 1911 as The New Prince’s Theatre with a production of The Three Musketeers, and then becoming the Prince’s Theatre in 1914. It had a seating capacity of 2392 and a stage that had a width of 31 feet 10 inches and a depth of 31 feet.

Located near New Oxford Street the theatre was the last to be built in Shaftesbury Avenue. It had considerable success with an 18 week season of operas in 1919 by Gilbert and Sullivan, which were presented by the D’Oyly Carte Opera Company. These became a frequent entertainment at the theatre in the 1920s, interspersed with runs of theatre productions transferred from other venues. The popular Basil Rathbone performed at the Prince’s Theatre in May 1933 when he played the role of Julian Beauclerc in a revival of Diplomacy. A revival of The Rose of Persia played at the theatre in 1935 with The D’Oyly Carte returning in 1942.

The theatre was bought by EMI in 1962 and was named the Shaftesbury Theatre the subsequent year. Broadway productions transferred to the theatre in the 1960s including the musical Gentlemen Prefer Blondes (1962), How to Succeed in Business Without Really Trying (1963) and Little Me (1964).

Part of the ceiling collapsed on 20th July 1973, forcing the closure of the long-running musical Hair, after 1998 performances. The theatre almost fell victim to subsequent redevelopment, but a successful campaign by Equity resulted in the theatre being placed on the ‘Statutory List of Buildings of Special Architectural or Historic Interest’, and in March 1974 the theatre was Grade II listed by English Heritage.

The theatre reopened with the musical West Side Story a year later. Shows in the 1980s included They’re Playing Our Song (1980) and Follies (1987). The 1990s included Kiss of the Spider Woman (1992), Eddie Izzard: Definite Article (1995) and the musical Rent (1998). During the redevelopment of the Royal Opera House in Covent Garden in the late 1990s, the theatre was used as an alternative London venue for performances including Benjamin Britten’s Paul Bunyan.

Yesterday I was invited to a little taste of the new musical & Juliet. The launch event was held at Jack Solomons and was buzzing with excitement and interest. Not many details had previously been known about the production and the big draw so far seems to be the music with all the hit songs featured being from Max Martin. The official website says about this new exciting show: '& Juliet is the irreverent and fun-loving new West End musical that asks: what if Juliet’s famous ending … END_OF_DOCUMENT_TOKEN_TO_BE_REPLACED

Just as there is a reason why certain plays and musicals aren’t revived very often (put bluntly, they’re not very good), there’s a reason why songs from the Simon & Garfunkel repertoire are still enjoyed by many people decades after they were released – put just as bluntly, they’re brilliant. It is, therefore, a tall order for anyone to take on a production like The Simon & Garfunkel Story (which really, although life events and professional milestones are all explained during the course … END_OF_DOCUMENT_TOKEN_TO_BE_REPLACED

The world’s biggest selling magic spectacular, The Illusionists – Direct From Broadway, will return to London’s West End this summer with a brand new show from Saturday 6th July to Sunday 1st September at the Shaftesbury Theatre. The all-star line-up will see audiences wowed by The Showman James More, The Unforgettable Enzo, The Manipulator Yu Ho-Jin, The Futurist Adam Trent, The Mentalist Chris Cox, The Trickster Paul Dabek and The Daredevil Jonathan Goodwin. Tickets are now sale. Last seen … END_OF_DOCUMENT_TOKEN_TO_BE_REPLACED

& Juliet is the joyous, new West End musical that asks: what if Juliet’s famous ending was really just her beginning? What if she decided to choose her own fate? Soaring with the music of Max Martin, the acclaimed songwriter of some of the biggest pop anthems of the last 30 years, & Juliet is to star the award-winning Miriam-Teak Lee. Miriam-Teak was awarded Best Actress in a Musical at The Stage Debut Awards for her role of Claire DeLoone in On The Town. She was one of the stars … END_OF_DOCUMENT_TOKEN_TO_BE_REPLACED

The world’s biggest selling magic spectacular, The Illusionists – Direct From Broadway, will return to London next summer with a brand new show from Saturday 6th July to Saturday 1st September 2019 at the Shaftesbury Theatre. Tickets are now sale and the cast will be announced in the new year. Last seen in the West End in 2015, The Illusionists is a mind-blowing spectacular showcasing the jaw-dropping talents of seven of the most incredible illusionists on earth. Collectively these performers … END_OF_DOCUMENT_TOKEN_TO_BE_REPLACED

On 15th June 2017 at the Shaftesbury Theatre Jackie and Tito Jackson surprised the audience as they joined the cast of Motown the Musical after a performance of the West End hit production. On stage, The Jacksons met with Motown the Musical’ s Raphael Higgins-Humes, Samuel Nicholas, Jay Perry, Simon Ray Harvey and Wilson Kiiru who play The Jackson Five, Cedric Neal (Berry Gordy) and Lucy St Louis (Diana Ross). Gordy signed The Jackson Five to Motown records in 1969 when they released their … END_OF_DOCUMENT_TOKEN_TO_BE_REPLACED