Les Miserables is at the Queen’s Theatre 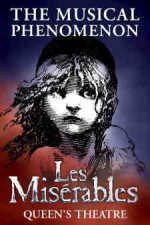 Winner of the 2014 BBC Radio 2 Audience Olivier Award. Cameron Mackintosh’s legendary production of Boublil and Schönberg’s Les Misérables is a global stage sensation. Seen by more than 65 million people in 42 countries and in 22 languages around the globe, it is still breaking box-office records everywhere.

Set against the backdrop of 19th-century France, Les Misérables tells an enthralling story of broken dreams and unrequited love, passion, sacrifice and redemption – a timeless testament to the survival of the human spirit.

Ex-convict Jean Valjean is hunted for decades by the ruthless policeman Javert after he breaks parole. When Valjean agrees to care for factory worker Fantine’s young daughter, Cosette, their lives change forever. Featuring the songs 'I Dreamed A Dream', 'Bring Him Home', 'One Day More' and 'On My Own' – Les Misérables is the show of shows! 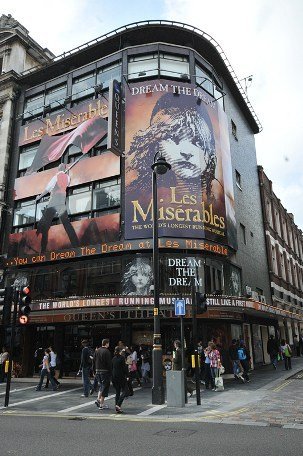 The Queen's Theatre London was designed as a twin to the Globe Theatre (now called the Gielgud Theatre). During the 2nd World war on 24th September 1940 a bomb dropped on the theatre destroying the entire front of house area along with part of the rear stalls. Following this bomb damage the theatre was used for rehearsals for a period of time.

The Queen’s Theatre reopened on 8th July 1959 after the front facade and front foyers had been rebuilt together with a new exterior designed by Brian Westwood and Sir Hugh Casson. During early 1992 the theatre was refurbished.

Productions at the theatre have included the 1961 musical Stop the World I Want To Get Off! with Anthony Newley which had a run of 485 performances. In 1966 Noel Coward made his final stage appearance in Suite in Three Keys. Maggie Smith and Robert Stephens appeared at the theatre together in 1972. During 1975 Otherwise Engaged had a run of 1029 performances. In 1982 Kenneth Branagh made his West End debut in Another Country and in 1987 Jeffrey Archer’s first play Beyond Reasonable Doubt started a run of 17 months. More recent productions at The Queens Theatre include the Australian song-and-dance show Hot Shoe Shuffle, the Stephen Sondheim musical Passion with Michael Ball and Maria Friedman and Masterclass with Patti LuPone.

In 2019, Cameron Mackintosh announced that the long-running original production of Les Misérables would close on 13 July 2019 while the theatre goes under a major restoration and will return in a new production from 18 December 2019, when The Queen's Theatre would be renamed as The Sondheim Theatre in honor of composer and lyricist Stephen Sondheim

Eva Noblezada's first performance as Eponine in the West End production of LES MISÉRABLES at the Queen's Theatre London, Monday 4th April 2016. Eva Noblezada wowed audiences as ‘Kim’ in Cameron Mackintosh’s new production of Boublil and Schönberg’s legendary musical “Miss Saigon”, having made her professional stage debut in the role when the musical opened in 2014 at the Prince Edward Theatre. Eva will perform the role of ‘Kim’ when the show opens on Broadway in 2017. For her performance in … END_OF_DOCUMENT_TOKEN_TO_BE_REPLACED

I once had a job in a corporate head office once, and lasted 1 year and 49 weeks. I only remember this length of tenure because a) various people thought I was absolutely barmy to resign from a full-time permanent job with a pension in the middle of the 2008-2012 recession, and b) my department had to do what the Americans call ‘potluck’ - that is, bring your own dish - to my leaving shindig, because I didn’t qualify for having food and drink paid for by the company. I hadn’t clocked up the … END_OF_DOCUMENT_TOKEN_TO_BE_REPLACED

Now in its record-breaking 30th year, Cameron Mackintosh has announced cast changes for LES MISÉRABLES at the Queen’s Theatre London in 2016. Joining the cast from Monday 15th February 2016 are Patrice Tipoki as ‘Fantine’; Craig Mather as ‘Marius’ and Danielle Hope as ‘Eponine.’ Peter Lockyer will continue to star as ‘Jean Valjean’, Jeremy Secomb as ‘Javert’, Phil Daniels as ‘Thénardier’, Katy Secombe as ‘Madame Thénardier’; Zoë Doano as ‘Cosette’ and Bradley Jaden as ‘Enjolras’. From … END_OF_DOCUMENT_TOKEN_TO_BE_REPLACED

The Broadway production of Les Miserables has announced it will end its current run at the Imperial Theatre in September 2016, with John Owen-Jones set to return as Jean Valjean for the final performances from March onwards. The current Broadway revival, which is the only production playing in North America, is set to close its doors for good on 4th September 2016 after 1,026 performances at the Imperial Theatre. John Owen-Jones is the latest West End star to play the iconic role on … END_OF_DOCUMENT_TOKEN_TO_BE_REPLACED

Last night, (Thursday 8th October, 2015), Les Misérables celebrated its 30th anniversary with a very special gala performance at the Queen’s Theatre in aid of the Save The Children Syria Children’s Appeal. To celebrate this milestone, the current cast were joined on stage by members of the original company and special guests including Colm Wilkinson, Roger Allam, Patti LuPone, Frances Ruffelle, John Owen-Jones and Gerónimo Rauch in a special finale. Including the 1985 original company, the … END_OF_DOCUMENT_TOKEN_TO_BE_REPLACED

At the opening of the London production of Les Misérables London, the critics had their knives out. Public opinion differed. Somethings never change, I hear you say. The Sunday Telegraph's Francis King: "a lurid Victorian melodrama produced with Victorian lavishness" and Michael Ratcliffe from The Observer: "a witless and synthetic entertainment". Les Misérables has run continuously since October 1985. What say you now critics? There will of course be those theatregoers that don’t like the … END_OF_DOCUMENT_TOKEN_TO_BE_REPLACED