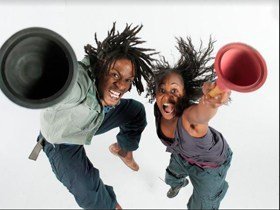 Celebrating its 13th sensational year in London, Stomp is now fresher, faster and funnier than ever before.

This multi-award winning show continues to astound audiences across the world with its universal language of rhythm, theatre, comedy and dance.

Eight performers use everything from Zippo lighters, plastic bags, bin lids and even the kitchen sink to hammer out an explosively feel-good rhythm.

Show Opened: 20th Sep 2007
Booking Until: 8th Jan 2018
Important Info:
We recommend patrons arrive at least 15 minutess in advance of the show start time.
Please note that the theatre are no longer accepting bags into the theatre cloakrooms.

The Ambassadors Theatre will continue to carry out bag searches and accept there may be some delays to patrons, please be aware that your bags will need to be checked before being seated.

The Olivier Award-winning and global phenomenon STOMP will end its 15-year run in London’s West End on 7th January 2018, following a box office record-breaking 10-year run at London’s Ambassadors Theatre. However, as the creators of STOMP, Luke Cresswell and Steve McNicholas, state, this is not the end of STOMP in London: “We want to […]

The cast and audience celebrated last night (Monday 25th September at the Ambassadors Theatre) 15 years of STOMP in London. STOMP is currently booking until 15th April 2018 at London’s Ambassadors Theatre. STOMP was created by Luke Cresswell and Steve McNicholas and was first performed in 1991 in Edinburgh. The show played Sadler’s Wells Theatre […]

As part of STOMP’s continuing 13th Birthday celebrations in London’s West End, the show’s producers have invited Mousetrap Theatre Projects to organise a special free schools’ matinee for 13 year-olds on Monday 12 October at the Ambassadors Theatre. The performance will begin at 2.00pm, followed by a Q&A with the cast. Steve McNicholas, co-creator of […]

STOMP – the multi-award winning, international hit show – celebrates its 20th birthday this autumn (2011) with special events throughout London on Monday 14th November, culminating in a thrilling and unique performance of the show. For one night only, a number of high-profile comedian friends of STOMP will take part in a special routine, joining […]