The Boys in the Band Tickets 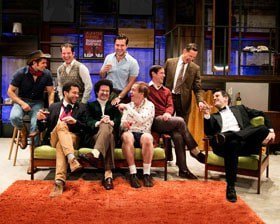 “Life’s a goddam laugh riot!”
Mark Gatiss stars in this strictly limited West End transfer of the first major revival of this iconic play in two decades. Razor sharp and packed with wit, The Boys in the Band is fresh, startling and brilliantly entertaining.

There’s a party tonight. It’s 1968 and nine men gather in a New York apartment for a birthday celebration. Harold (Mark Gatiss) receives a surprise gift from his friend, Emory (James Holmes), in the form of a beautiful male hustler. Meanwhile, party host Michael (Ian Hallard) gets an unwanted surprise of his own. As the booze is drunk and the dope smoked, the mood swings from hilarity to heartbreak.

Producers Tom O’Connell and James Seabright are thrilled to announce a West End transfer for their sell-out production of Mart Crowley’s ground-breaking play, THE BOYS IN THE BAND, opening at the Vaudeville Theatre on 7 February 2017, playing for a limited two-week season until 18 February, with a press night on Wednesday 8 February. There’s a party about to commence when nine men gather in a New York apartment for a birthday celebration. Harold, a self-confessed ‘Jew fairy’, receives a … END_OF_DOCUMENT_TOKEN_TO_BE_REPLACED

This is a revival of Mart Cowley’s classic play, The Boys in the Band. The play was deemed shocking when it was first performed Off-Broadway in 1968. Set in a New York apartment which is adorned with portraits of Hollywood greats such as Judy Garland and Marilyn Monroe it tells the story of Michael (Ian Hallard) who is busily organising a birthday party for his friend Harold (Mark Gatiss) when he receives an unexpected visit from Donald (Daniel Boys) and a phone call from former college … END_OF_DOCUMENT_TOKEN_TO_BE_REPLACED

The Boys in the Band by Mart Crowley - starring Olivier Award winner Mark Gatiss and Ian Hallard to open at Park Theatre Autumn 2016 followed by UK Tour. Producers Tom O’Connell and James Seabright have announced that they will be staging a first-class revival of Mart Crowley’s ground-breaking play, THE BOYS IN THE BAND, opening at Park Theatre in London this autumn, and that, due to popular demand, the production will embark on a short tour to The Lowry, Theatre Royal Brighton and West … END_OF_DOCUMENT_TOKEN_TO_BE_REPLACED