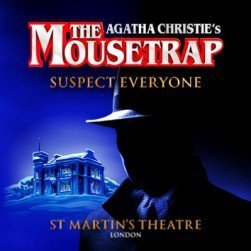 The Mousetrap first opened in 1952 at The Ambassador’s Theatre London and has been running continuously since then. It transferred to St Martin’s Theatre on 25th March, 1974.

The Mousetrap is well known as the world’s longest running play. Tickets have been bought for Agatha Christie’s The Mousetrap for over 50 years. The reputation of this murder mystery masterpiece continues to rise as new generations of theatregoers head along to try to see if they can figure out out who is guilty.

The scene is set when a group of people gathered in a remote part of the countryside, realise to their horror, that there is a murderer in their midst. Who can the murderer be in this classic? One by one the suspicious characters reveal their sordid pasts until at the last, the nerve-wracking moment when the identity and the motive are finally revealed.

Booking Until: 5th Jan 2019
Important Info: We recommend patrons arrive at least 15 minutes in advance of the show start time.

The current cast of Agatha Christie’s The Mousetrap which continues its record-breaking run in London's West End at St Martin's Theatre. Plan ahead and book tickets for any date in the booking period, or buy last theatre minute tickets today for The Mousetrap. Agatha Christie's legendary whodunit is still packing them in after more than 60 years in the West End. The world's longest-running play has lost none of its form. Indeed, the reputation of this murder mystery masterpiece goes from … END_OF_DOCUMENT_TOKEN_TO_BE_REPLACED

New production images have been published for The Mousetrap at St Martin's Theatre in London's West End. Agatha Christie’s legendary whodunit is still packing them in after more than 60 years in the West End. The world’s longest-running play has lost none of its form. Indeed, the reputation of this murder mystery masterpiece goes from strength to strength as new generations of theatregoers are tricked and teased by a plot with more twists than a really twisty thing! A group of people … END_OF_DOCUMENT_TOKEN_TO_BE_REPLACED

Agatha Christie’s murder mystery The Mousetrap will begin the final leg of its record-breaking, and first ever, UK tour at Glasgow Theatre Royal on 12th September. The tour will then visit Swindon, Cardiff, Wakefield, Perth, Ayr, Edinburgh, Guildford, Birmingham, Tunbridge Wells, Isle of Wight, Derry, Oxford, Carlisle and Aberystwyth. The Mousetrap originally opened at Nottingham Theatre Royal in 1952 starring Richard Attenborough and his wife Sheila Sim before embarking on its current … END_OF_DOCUMENT_TOKEN_TO_BE_REPLACED

Agatha Christie’s record-breaking play, The Mousetrap announces a brand new West End cast from 21st December 2015. Visit here for the current cast of The Mousetrap. Joining the London production, which has been running for more than 60 years, are Emma Deegan and Rob Heanley as Mollie Ralston and Giles Ralston. They, in turn, are joined by Timothy O’Hara as Christopher Wren, Eunice Roberts as Mrs Boyle, Laurence Kennedy as Major Metcalf, Jocasta King as Miss Casewell, Philip Cox as Mr … END_OF_DOCUMENT_TOKEN_TO_BE_REPLACED

Due to unprecedented demand, Agatha Christie’s The Mousetrap will continue with its record-breaking UK tour with new dates in 2016. The much loved murder mystery will begin the 2016 leg of its tour at Brighton Theatre Royal on 25th January before visiting more than 25 additional venues across the UK. Casting and booking information for 2016 will be announced in due course. The production, which originally opened in 1952 starring the late Richard Attenborough and his wife Sheila Sim, will … END_OF_DOCUMENT_TOKEN_TO_BE_REPLACED

Agatha Christie’s The Mousetrap continues its record-breaking, and first ever, UK tour into 2015. The beloved murder mystery begins the 2015 leg of its tour at His Majesty’s Theatre in Aberdeen on 28th April. The production will then visit over 25 venues across the UK including a return visit to The Marlowe Theatre, Canterbury in September 2015 where the record-breaking tour began in September 2012. The cast for the 2015 tour includes Hester Arden (Macbeth, Orange Tree Theatre) as Miss … END_OF_DOCUMENT_TOKEN_TO_BE_REPLACED