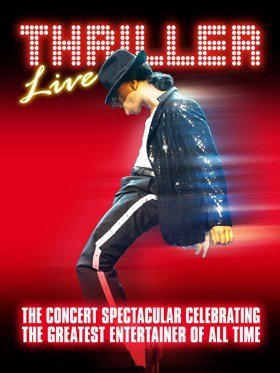 Moonwalking into the West End after three acclaimed UK tours and standing ovations across Europe, Thriller - Live is a spectacular, high-octane show celebrating the career of Michael Jackson and the Jackson 5.

Expect your favourite Jackson songs delivered by a super-talented cast and band, including the smash hits: I Want You Back, I'll Be There, Show You The Way To Go, Can You Feel It, Rock With You, She's Out Of My Life, Beat It, Billie Jean, Earth Song, Thriller and many more.

Please Note: Contains constant use of flashing LED screen and some strobe lighting.

Thriller Live, the acclaimed West End concert spectacular, is today celebrating a landmark 7000 performances - with shows in both London and Edinburgh. The West End cast are celebrating along with the international tour cast, who are performing all this week at Edinburgh’s Playhouse Theatre. Producers Paul Walden and Derek Nicol said: “Just as Michael Jackson himself did throughout his prolific career, Thriller Live continues to smash old records and set new ones. We are more than thrilled … END_OF_DOCUMENT_TOKEN_TO_BE_REPLACED

Thriller Live, the West End concert spectacular, is extending its record-breaking run to April 2020. Now in its 11th year, producers today open up a new 27-week booking period. It had previously been booking to September 2019. Jackie, Marlon and Tito Jackson greeted the news of the West End extension: “Thriller Live is such a cool celebration of Michael’s music and the music of the Jackson Five we made together. We loved the show when we saw it, and fans in the audience were ‘thrilled’ with … END_OF_DOCUMENT_TOKEN_TO_BE_REPLACED

Already the 14th longest-running musical in the West End, Thriller Live has just marked its 10th anniversary at the Lyric Theatre, ending with an on-stage ambition to notch up a second decade. From the quality of the current cast and theatregoers' seemingly insatiable nostalgia, it’s an ambition this electrifying show is likely to achieve. While there are elements of both, Thriller Live is neither a tribute act nor a biography-cum-jukebox – the songs aren’t even in chronological order. What … END_OF_DOCUMENT_TOKEN_TO_BE_REPLACED

The champagne is on ice on Shaftesbury Avenue as Thriller Live, the concert spectacular which showcases Michael Jackson’s unforgettable music and dazzling choreography prepares to celebrate 10 years as the Lyric Theatre’s longest-running success. Thriller Live will celebrate its 10th birthday in the West End on January 22 On April 9 it will become the 13th Longest Running West End Musical in history Thriller Live has just celebrated its 4,000th West End performance with guest stars … END_OF_DOCUMENT_TOKEN_TO_BE_REPLACED

Last night (Wednesday 12th September 2018) was a special celebration to mark the 4,000 production of Thriller Live at the Lyric Shaftesbury Avenue. In Michael's spirit of caring and giving, all net proceeds from the performance were donated to The Princes Trust, specifically to support young people. And an extra sparkle of glamour was added to the occasion as Peter Andre made a guest appearance. It was a sell-out, the show rocked and the audience were thrilled. A wonderful occasion which I felt … END_OF_DOCUMENT_TOKEN_TO_BE_REPLACED