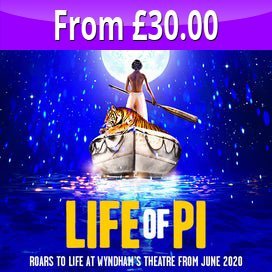 After a cargo ship sinks in the middle of the vast Pacific Ocean, there are five survivors stranded on a lifeboat - a hyena, a zebra, an orangutan, a Royal Bengal tiger, and a sixteen-year-old boy named Pi. Time is against them, nature is harsh, who will survive?

Based on one of the most extraordinary and best-loved works of fiction – winner of the Man Booker Prize, selling over fifteen million copies worldwide – and featuring breath-taking puppetry and state-of-the-art visuals, Life of Pi is a universally acclaimed, smash hit adaptation of an epic journey of endurance and hope.

Long after the curtain falls, “Life of Pi will make you believe in the power of theatre” (The Times).

***** ‘A extraordinary journey. Unmissable’ The Guardian

***** ‘It will make you believe in theatre. A triumph’ Sunday Times

***** ‘Everything about this production is amazing’ The Observer

DryWrite, Soho Theatre and Annapurna Theatre have today announced that the critically acclaimed, multi-award-winning FLEABAG is to play the West End for a strictly limited four week run this summer. Written by Phoebe Waller-Bridge and directed by Vicky Jones, the one-woman show just finished playing to a sold-out house Off-Broadway in New York, and premiered […]

Full casting has been announced to join Hollywood star and multiple Tony Award-winning Broadway legend Matthew Broderick in The Starry Messenger by Kenneth Lonergan, the Academy Award-winning writer of Manchester-By-The-Sea. The Starry Messenger will begin performances at the Wyndham’s Theatre on Thursday 16 May (Press Night: Wednesday 29 May at 7:00pm) and play a strictly […]

Stephen Mangan and Kara Tointon return to the West End to star in the world premiere of the classic Ealing comedy THE MAN IN THE WHITE SUIT, adapted and directed by Sean Foley. When Sidney Stratton (Stephen Mangan), invents a fabric that never gets dirty and never wears out, manufacturers and trades unions are terrified […]

Hollywood star and multiple Tony Award-winning Broadway legend Matthew Broderick – renowned for roles including Ferris Bueller in the iconic movie and Leo Bloom in The Producers – is to make his West End debut in The Starry Messenger by Kenneth Lonergan, the Academy Award-winning writer of Manchester-By-The-Sea. The production, directed by Sam Yates (Glengarry […]

Celebrated French Playwright Florian Zeller has thrown a lightning bolt onto the stage in his latest play, The Height of the Storm, one which crackles with the energy of modern day Greek tragedy. It is a beautifully crafted play wrapped inside a gossamer veil of lost memory and ghosted conversations that unravels itself as each […]