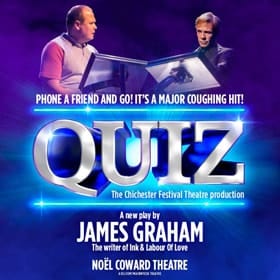 Quiz has a strictly limited 12-week run at the Noël Coward Theatre from 31st March 2018.

Is Quiz:
A) The world premiere of a new play by acclaimed writer James Graham?

B) A provocative re-examination of the conviction of Charles Ingram, ‘the coughing Major’, for cheating, following his appearance on Who Wants To Be A Millionaire?

C) A hilarious celebration of the great tradition of the British quiz show?

D) A razor-sharp analysis of the 21st century’s dangerous new attitude to truth and lies?

James Graham’s hit play This House transferred to the West End following sell-out runs during Festival 2016 and at the National Theatre. Graham’s other work for theatre in the UK and US, and on screen, includes The Vote, Finding Neverland, Privacy, Coalition and X+Y.