The classic 1992 film Aladdin has been brought to thrilling life as a stage musical by the producer of The Lion King, featuring all the songs from the Academy Award©-winning score, together with new music written for this production.

Featuring the timeless songs from the classic film including A Whole New World, Friend Like Me and Arabian Nights together with new music written for the new musical adaptation of Aladdin.

Aladdin is recommended for a general audience. As an advisory to adults who might bring young people, Disney recommends Aladdin for ages 6 and up.

With stunning sets from multi-award-winning designer Bob Crowley and over 350 beautiful costumes from Gregg Barnes (Kinky Boots), Aladdin is an unmissable event in London theatre.

Children under the age of 3 will not be admitted into the theatre. All persons aged 16 or under must be accompanied and sat next to the accompanying adult. They may not sit on their own within the auditorium. 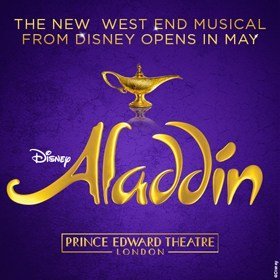 5-Star Review of Aladdin
There’s something for everyone in this laugh-out-loud and shimmering show, where the cast come across as thoroughly enjoying themselves. Not since Sister Act The Musical played at the London Palladium have I left the theatre feeling so positively upbeat and overjoyed. I wish Aladdin a long and successful run. This is an Arabian night not to be missed – the professionalism and skill in this show is astounding.

After an absence of two years, it was so good to be back under Waterloo Station at the first week of … END_OF_DOCUMENT_TOKEN_TO_BE_REPLACED

After creating the “absorbing and provocative” Version 2.0 and the “eminently lovable” Letters, … END_OF_DOCUMENT_TOKEN_TO_BE_REPLACED