You are here: Home / Musicals / Bat Out of Hell Tickets London Dominion Theatre 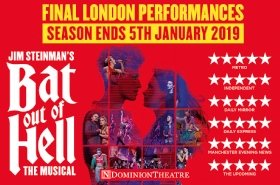 The West End season of the award-winning Bat Out Of Hell – The Musical must end at the Dominion Theatre on Saturday 5 January 2019. Meanwhile, the North American Tour opens in Toronto, Canada on 16 October 2018 and the German language premiere will open in Oberhausen, Germany on 2 November 2018.

Jim Steinman’s Bat Out Of Hell – The Musical wowed critics and public alike when it played limited seasons at Manchester Opera House, London Coliseum and Toronto’s Ed Mirvish Theatre in 2017, and has been seen by over 650,000 people to date. It began previews at the Dominion Theatre on Monday 2 April, with a gala performance on 19 April 2018. Earlier this year, the show’s producers announced a wide-ranging global partnership with the Invictus Games Foundation, the governing body of the Invictus Games, and a special Gala Performance of the musical in support of the Invictus Games Foundation will take place on Thursday 6 December 2018.

Read our 5-star review of Bat Out of Hell The Musical – By Chris Omaweng
To say “there are moments of gold and there were flashes of light” is understating the sheer spectacle of thisan show. Exhausting and exhilarating in equal measure, I enjoyed it so much I’ve booked to see it again. I urge you, go to Hell.

Additional Information
Age Restrictions: Suitable for age 12+ due to mild swearing and scenes of partial nudity. Children under the age of 5 will not be admitted.

Important Info: The show contains strobe lighting, haze and flame effects. The sound levels are very high throughout the show and there are scenes that include gunshots sound effects.