Home » Musicals » I Do! I Do! at Upstairs at The Gatehouse | Review 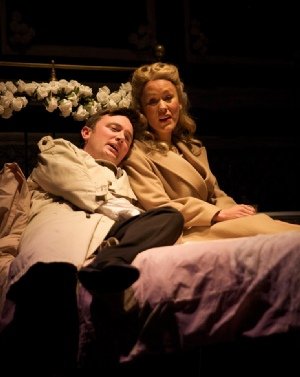 Upstairs at the Gatehouse in Highgate is one of the 40 or so independent, often above-a-pub, theatres in London. Usually pub theatre is of a surprisingly good quality: well-trained professional actors stand out amongst restricted (or sometimes seemingly non-existent) budgets that limit set and costume design options but it’s one of the great privileges of this city to be able to behold such stellar talent in full-length productions so readily for not much more than a tenner and without leaving your Tube zone. Frequently, London pub theatre is at the cutting edge with bold, sometimes controversial ideas and experiments of form and style – either as reimagined revivals or new writing. I Do! I Do! at the Gatehouse is consistent with these expectations insomuch as its cast of Gemma Maclean, as Agnes, and Ben Morris, as Michael, are top-notch performers with talents that deserve wider exposure and clearly director Joseph Hodges and his production team are making do with limited resources. However, this production is utterly fascinating in how anomalous it is compared to the sorts of plays typically mounted at any of London’s independent venues.

In a world or high political drama, race-blind (and sometimes gender-blind) casting, where outspoken enfants terribles attack every sacred cow with challenging or dark material, it is nothing short of extraordinary to encounter a two-hander musical from the mid-60s about a straight Caucasian married couple raising a nuclear family in a happily capitalistic society – transmitted without any revisionism or irony. In fact, as a frequent theatregoer so conditioned to challenging material, I found myself waiting for the subversion to begin but it never came. For the majority of the audience who tapped their toes and laughed out loud, the quaint, hetero-normative and decidedly white-bread aspects of the play appeared just fine to them. This play offers the scarce opportunity to enjoy a pleasant, safe and comfy evening’s entertainment with your relatives who may have voted differently from you in 2016, but it probably isn’t for any iconoclasts or art students in your life.

Having said that, this musical – written by the male duo of Harvey Schmidt (music) and Tom Jones (book and lyrics) – which is based on a 1951 play by Mr. Jan de Hartog, The Four-Poster, isn’t entirely devoid of traces of first-wave feminism. Whilst you’ll hardly feel ‘woke’ for watching this musical, by the end you’re also unlikely to feel that watching it counts an act of betrayal to the sisterhood. My companion found herself moved to tears of identification with Agnes’ personal dilemmas at one point and saw glistening eyes amongst other women for whom some of the struggles haven’t manifestly changed in the last 50 years.

Simplicity is central to this production, making it a favourite for amateur theatre troupes, but with musical director Henry Brennan playing the entire score on the piano flawlessly and the well-tuned voices of Maclean and Morris harmoniously delivering, the quality of the performances are unmistakably professional. Gemma Maclean is an especially impressive triple-threat and gives us a convincing and funny portrayal with strong comic timing and a more-than-passable American accent. I did wonder, though, if the original Broadway production featured more hoofing and what more entertainment we’d consume if this one did. Maclean can certainly move but there was only one number in which she showed off her skills. Morris didn’t look as at ease with the movment as Maclean but also delivers a funny and solid performance.

The set and costume design, however, are disappointing. The problem is not their simplicity but rather the accidental anachronism that cannot be excused due to lack of budget. Emily Bestow’s credentials and training suggest she should know better than to place a mid-century plastic-cased typewriter on stage when the characters are meant to be in the late 19th century, especially as it is not needed until the second act when considerable time has passed. If she couldn’t have borrowed even a non-working correct vintage typewriter, then a symbolic blotter and ink well and pen would not have broken the bank and would have made more sense alongside chatter about gas lamps.

No costume designer is credited and the lack of ownership of this vital task shows. It certainly isn’t a matter of budget that stopped Morris being costumed in historically-correct baggy linen undergarments and not M&S brushed cotton snug-boxers of the 21st century. (It would have cost nothing to have at least cut the manufacturer’s label out of the waistband if the wardrobe mandated ‘actors’ own’.) Why does Agnes find a pair of vaguely Victorian bloomers to wear when we are now squarely in the 20th century in the second act but can’t locate them on her wedding night in 1890? What is the point of a mid-20th century handbag slung over a chair in the near turn-of-the-century first act, when it’s not even used until the second act? Is this due not have a props master or assistant stage manger? Ultimately world-building is director Joseph Hodges’ job and he impedes this important task by not sweating the details enough. With a weekend ticket price of £20, he owes it to his audience – and to his fine professional actors – to tidy up any sloppiness that makes the audience wonder, even for a second, if they are watching community rather than independent theatre. Re-looking at the vinyl 70s suitcases that are prominent in the opening scene would certainly be a good start. Otherwise, if anachronism is a choice then it needs to be deliberate and full-throated, which it clearly is not in this straighter than straight production.

A night out at the Gatehouse (which has several dining options from pub grub to proper dinner) with a few drinks and a bit of not particularly illuminating but perfectly pleasant musical theatre, seems an ideal way to spend a 13th or 27th wedding anniversary, provided you’re secure in your relationship. Taking in I Do! I Do! is a fine way to engage in a little old-fashioned escapism or mark a lesser occasion with some gentle war-of-the-sexes show tunes sung with heart by a strong cast on a somewhat shabby set.

I Do! I Do! chronicles the highs and lows of a couple’s marriage spanning over fifty years.
This new production will feature all-new and updated material including never before heard songs by Broadway lyricist Tom Jones. Based on the Jan De Hartog play, The Fourposter, I Do! I Do! was the first two person musical to play on Broadway where it originally ran for 560 performances starring Mary Martin and Robert Preston prior to a successful 1996 off-Broadway revival.