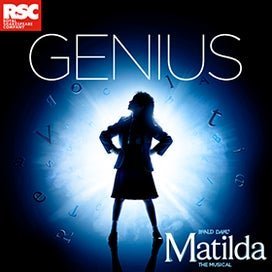 When the RSC-staged musical adaption of Roald Dahl’s Matilda played in Stratford earlier this year, it was widely acclaimed by both audience and critic alike. News of its West End transfer to the Cambridge Theatre was enthusiastically received and the London audience eagerly anticipated its arrival. Well, now it’s here and it more than lives up to the hype.

Roald Dahl’s book about the ill-treated child prodigy who discovers she has ‘super-powers’ and can move objects with her eyes is one that children still enjoy to this day, but writer Dennis Kelly’s adaption takes that enjoyment to new levels.

In Matilda The Musical everything, from the words spelt out in the alphabet blocks of Rob Howell’s set design to the title character’s scenes in the library, continues in Dahl’s exalting of the virtue of books. The importance of stories and a sense of imagination are the significant heart of this musical, expressed through the actions and experiences of Matilda. Morality also figures greatly throughout the musical, as Matilda’s absolute ideas of right and wrong prompt her to stand up to those who have erred, in amusingly creative ways.

There is also an underlying sense of sadness to the little girl who brings so much happiness to others, but remains unhappy and unloved herself; nevermore apparent than in her fabricated tales of how proud and loving her parents are.

Paul Kaye and Josie Walker are hilarious as the appalling Mr and Mrs Wormwood. Matilda’s ballroom dancing-obsessed mother and shifty car-dealer father receive some of the funniest lines and provide a memorable comedy duo – the Thernadiers for a modern world. Lauren Ward perfectly emulates the sweetly compassionate teacher Miss Honey, who sees her own childhood reflected in Matilda.

One of the show’s greatest triumphs is displayed in the larger-than-life Miss Trunchbull, the former Olympic hammer-throwing headteacher who detests all children, referring to them as ‘maggots’. Bertie Carvel brilliantly portrays ‘The Trunchbull’ as terrifyingly menacing and slightly unhinged, but also with an air of girlishness. Dahl’s creation is one of the greatest villains in literary children’s fiction, but the ingenious decision to cast a male actor in the role adds another dimension to the character as the masculinity of Carvel brilliantly offsets the femininity he brings, with comedic effect.

The real stars of the show have to be the child cast however. Sharing scenes with other ‘kids’ played by an adult ensemble, they belt out their numbers and perfectly perform Peter Darling’s slickly creative choreography with endearing proficiency. The Matilda for this show was Sophia Kiely, who brought vulnerability, charm and a pretty little voice to her performance.

The focus of the show is more on the plight of Matilda than her ‘powers’, with her first display of telekinesis not appearing until the second act. Kelly has created a musical that pays homage to the central aspects of Dahl’s original story, while being very much its own, individual product. A big part of its appeal also lies in the addition of comedian Tim Minchin as the show’s composer and lyricist. From his punchy songs with their fast-paced and witty snappy lyrics to the softly touching and openly emotive numbers, each one seamlessly flows in wordsmith Minchin’s classically clever style.

The combination of Kelly and Minchin results in a musical that grown-ups and kids can universally enjoy. There’s plenty for everyone here: the comic characters of librarian Mrs Phelps (Melanie La Barrie) and Mrs Wormwood’s flamboyant dance partner Rudolpho (Gary Watson); the launch of a pig-tailed pupil; the ‘chocolate cake’ scene; Matilda’s prophetic story of the escapologist and the acrobat and Carvel flouncing around the stage in a miniscule skirt for a Phys Ed lesson – every moment entertains the audience.

More could have been made of the moment Matilda and her classmates drive out the bullying Miss Trunchbull, but overall, this is a musical that is as close to perfect as you can get. It is a wonderful offering from cast and creative alike; a fantastically fun night out for the whole family. Everyone should make the decision to see Matilda – it’s as easy as A-B-C.

Tori Scott needs to tell baristas in the sort of coffee shops that write customer names on paper cups in marker pen that it’s Tori With An ‘I’. While … END_OF_DOCUMENT_TOKEN_TO_BE_REPLACED

A child plays with an orange, and the old man works himself into the ground. Playful, rough, intimate and touchingly funny, Home is a piece that will … END_OF_DOCUMENT_TOKEN_TO_BE_REPLACED

Like most people, I think, I often have mixed feelings about a show I see. Occasionally, though it is rare, there will be a production where … END_OF_DOCUMENT_TOKEN_TO_BE_REPLACED