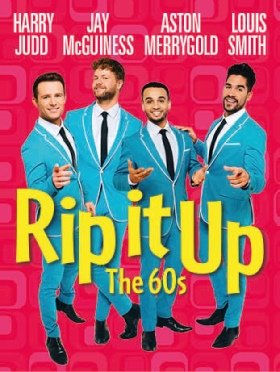 The ultimate Strictly boy band of dance bring their spectacular show to London’s West End from February 2019. A huge success for the Strictly celebrities, Rip it Up – The 60s brings the decade smashing into the 21st century through an explosion of song, dance, acrobatics and amazing visuals to celebrate the most revolutionary cultural period ever in its first ever West End run, opening at the Garrick Theatre for four months from the 7th February 2019.

Following a highly successful 2018 UK wide tour, McFly’s Harry Judd, JLS’s Aston Merrygold and Olympic gymnast Louis Smith, will be joined in London by The Wanted’s Jay McGuinness and are paired alongside an incredible cast of dancers, singers and the Rip it Up live band to entertain with a psychedelic mix of music, style, culture, and fashion. With Aston and Jay singing, Harry on drums, and Louis performing the amazing gymnastic feats that made him one of our most successful Olympians, at the beating heart of the show is the fab four’s phenomenal dancing talent.

Following the hugely successful 2017 tour Rip It Up – The 50s Jay McGuiness returns to the Rip It Up family and joins Louis Smith, Aston Merrigold and Harry Judd in the West End next spring making up an awesome foursome. Formerly one-fifth of The Wanted who celebrated worldwide success with hits such as All Time Low and Glad You Came, Jay stole the hearts of the nation as he took to the dance floor with professional partner Aliona Vilani to become the 13th champion of Strictly Come Dancing in 2015.

Jay says: “I’m really looking forward to joining the cast as the undoubtedly best-looking member! Louis, Aston and Harry put on an amazing show touring with the 60s and I’m so grateful to be joining them. I can’t wait for me and the lads to sit right in the middle of the West End and Rip. It. Up”.

Drummer Harry Judd was part of the worldwide pop phenomenon McFly and McBusted, with 7 number one singles, 19 top 10 singles, 2 number one albums, a bestselling book and a BRIT Award. He has played countless sell-out arena tours, toured the world with One Direction and starred in Hollywood film ‘Just My Luck’. Having won the Children in Need special edition of Strictly Come Dancing in 2008 with professional Ola Jordan, he went on to win the 2011 season of Strictly with Aliona Vilani and the 2015 Strictly Christmas special with Joanne Clifton making him Strictly Come Dancing’s ‘Champion of Champions’.

Harry says: “I love to dance. Along with playing in a band, there’s no better feeling than being on stage dancing. I was brought up listening to ‘60s music by my parents, which has made the whole show even more special to be a part of. Aston and Louis are both incredible performers, so I am looking forward to taking the show to the West End stage, and to welcoming Jay to the group”


Pop star Aston Merrygold has sold over 6 million records in the UK and over 10 million worldwide and is the recipient of Two BRIT Awards and 5 MOBO’s as part of the hugely successful boy band JLS, who rose to fame as runners-up on the X Factor in 2008. A contestant in 2017 on BBC1’s Strictly Come Dancing with professional Janette Manrara, his shock exit in week 6 by the judges caused public outrage and he was dubbed ‘The People’s Champion’. Aston continues to release music as a solo artist, his last single ‘Precious’ featured Shy Carter (Meghan Trainor, Jason Derulo, Charlie Puth, Faith Hill, Tim McGraw) and Grammy Award-winning beat boxer Rhazel. His debut single ‘Get Stupid’ was an international hit and his EP was released in 2017 along with a sell-out UK tour.

Aston says: “It was so exciting to join the cast of Rip It Up on the 2018 UK tour. I felt like I had some unfinished business when it came to dance, and it’s been amazing to work with familiar faces. I’ve loved putting my own spin on some classic 60s moments and can’t wait to show that to a West End audience!”

Louis shot to fame in 2008 when he put British Gymnastics on the map by winning a Bronze medal in the pommel horse at the Beijing Olympics, the first Olympic medal for a British gymnast in 100 years. The British sporting superstar counts 4 Olympic medals from 3 separate Olympic Games amongst his career highlights, most recently winning a Silver Medal in the Rio De Janeiro Olympic Games in 2016. Having secured his position as one of Britain’s most successful artistic gymnasts, Louis has subsequently enjoyed an ever-rising TV and stage profile. Earlier today Louis announced his retirement from the world of gymnastics. Please find attached his supporting statement.

Of today’s announcement Louis says: “I’m over the moon to be joining the cast for Rip It Up again, and especially now in the West End. Being a part of the tour was incredible. To be amongst such talented people and receive the response that we did every night is something I never took for granted and now I’m just so excited to take things up another gear and put on a show worthy of the West End. I’ve always loved performing and having the opportunity to better myself as a performer, so this opportunity couldn’t be better suited for me.”

Undoubtedly one of the most energetic shows to ever hit the West End stage, just watching will leave you exhausted! No other show provides such a fantastic window into the musical magic of the 60’s, with a state-of-the-art screen featuring era-defining footage and celebrity contributions all adding to the host of visual delights.

Dance the night away to British legends such as The Beatles, The Rolling Stones, The Who, and American superstars such as The Beach Boys, The Byrds, The Doors, and The Mamas & The Papas. Listen to music from Mersey Beat, Motown and Mod to West Coast and Woodstock. Mixed in with a bit of Dusty Springfield, Burt Bacharach, Elvis Presley and Bob Dylan with soul classics from Aretha Franklin, James Brown and Motown legends Marvin Gaye, Stevie Wonder and The Supremes.

Rip It Up celebrates some of the most iconic sounds, sights and events from the tumultuous period which transformed the 20th Century. The 60s are back with a bang!