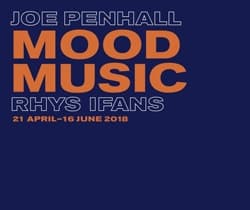 The Old Vic announces a casting change and further updates for the World Premiere of Joe Penhall’s new play Mood Music which previews from 21 April 2018, with a press night on 2 May 2018. Ben Chaplin will be taking on the role of Bernard replacing Rhys Ifans who, with regret, is withdrawing from the production due to family reasons.

Starring alongside Ben Chaplin is Seána Kerslake in the role of Cat, and she is joined by Pip Carter as Ramsay, Kurt Egyiawan as Miles, Jemma Redgrave as Vanessa and Neil Stuke as Seymour.

‘Music is a medication. The elixir of life. It’s for injecting into the bloodstream to take away the pain…to
promote euphoria…to adrenalise us and give us courage and fortitude.’ In a top London recording studio, a young songwriter Cat, her producer Bernard, their lawyers and psychotherapists go to battle over who owns a hit song.

A sly, wry exploration of the dark side of the music industry by Joe Penhall, the award-winning writer of Sunny Afternoon and Blue/Orange, the world premiere of Mood Music is directed by Roger Michell. Mood Music plays over The Old Vic’s 200th birthday on 11 May 2018 and is the fourth production in The Old Vic’s bicentenary season.

Ben Chaplin plays Bernard, a record producer. Theatre credits include Consent and The Reporter (National Theatre); Farewell to Theatre (Hampstead); This is How it Goes and The Glass Menagerie (Donmar Warehouse) and Retreat from Moscow (Booth Theater, Broadway). Film credits include Caravan; The Children’s Act; Snowden; Cinderella; Dorian Gray; Me and Orson Welles; The Waterhouse; Two Weeks; The New World; Chromophobia; Stage Beauty; The Touch; Murder by Numbers; Birthday Girl; Lost Souls; The Thin Red Line; Washington Square and The Truth About Cats and Dogs. Television credits include Press; Urban Myths; Apple Tree Yard; Mad Dogs; Book of Negroes; The Wipers Times; Dates; World Without End; After the Dance; Between the Lines; Minder; The Borrowers and Game On. Ben received a Tony Award Nomination for Best Actor for his performance in Retreat from Moscow and an Olivier Award Nomination for Best Supporting Actor in The Glass Menagerie.

Kurt Egyiawan plays Miles, Cat’s lawyer. Theatre credits include Othello, Measure for Measure, Henry V, King Lear and The Frontline (Shakespeare’s Globe); Season in the Congo (Young Vic); Berenice (Donmar Warehouse); Earthquakes in London (Headlong) and Richard III & Twelfth Night (Belasco Theater, New York). Film credits include Beasts of No Nation; Pan, Kill Your Friends and Skyfall. For Television he was a series regular in Fox TV’s The Exorcist. Kurt won the Spotlight Prize in 2010 Seána Kerslake plays Cat, a recording artist. Seána was recently named one of Screen International’s 2017 Stars of Tomorrow. She most recently played the role of Treasa opposite Seán McGinley in King of the Castle (Druid Theatre Co.) directed by Tony Award-winning director Garry Hynes, and just prior filmed the role of Gemma in Dublin Old School written by Emmett Kirwan and directed by Dave Tynan. Other recent credits include the lead role of Sarah in the feature film The Hole in the Ground directed by Lee Cronin, the lead role of Aisling in Can’t Cope, Won’t Cope directed by Cathy Brady (RTÉ & BBC3), the role of Una in We Ourselves directed by Paul Mercier, and the title role in Darren Thornton’s feature film A Date for Mad Mary. Winner, 2016 Bingham Ray New Talent Award, Galway Film Fleadh 2016.

Neil Stuke plays Seymour, Bernard’s lawyer. Neil first worked with Roger Michell when he left drama school in the television show, Downtown Lagos. He then worked with both Roger and Joe Penhall on the West End transfer of Blue/Orange. He also starred in Joe Penhall’s The Bullet at the Donmar Warehouse and helped Joe workshop the Kinks Musical. Neil’s previous work at The Old Vic includes Grace Note and the 24hr plays. Other recent theatre credits include Season’s Greetings at the National Theatre; Mike Bartlett’s Bull at 59E59 Theatre in New York and Young Vic; and Frankie and Johnny at the Chichester Festival Theatre. His numerous recent TV appearances include Silent Witness; Doctor Foster; Silk; Paranoid and Plebs. Neil has worked extensively in film, he appeared in BAFTA nominated Sliding Doors and more recently The Comedian’s Guide to Survival.

The National Theatre’s new musical Hex returns to the Olivier theatre for Christmas, after its original 2021 opening was delayed due to covid. The … END_OF_DOCUMENT_TOKEN_TO_BE_REPLACED

As it celebrates its 8th anniversary in the West End, The Play That Goes Wrong, the Olivier Award-winning smash hit announces an extension to the … END_OF_DOCUMENT_TOKEN_TO_BE_REPLACED

Producer Josh Andrews has today announced the lead cast for the UK tour of Peter James’ Wish You Were Dead: George Rainsford, will star as James’ … END_OF_DOCUMENT_TOKEN_TO_BE_REPLACED

MAMMA MIA! THE PARTY, London’s premier dining experience, is delighted to announce the new cast arriving at Nikos Taverna on the Greek island of … END_OF_DOCUMENT_TOKEN_TO_BE_REPLACED

Perform Productions is delighted to announce the cast and creative team for the West End premiere of Magical Merlin this October half-term. The … END_OF_DOCUMENT_TOKEN_TO_BE_REPLACED