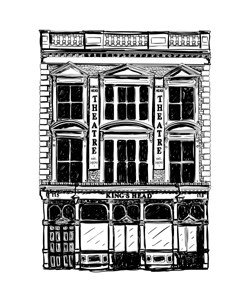 The King’s Head Theatre is delighted to announce that they will be offering reduced prices for the under-30s and the unwaged.

Tenner Tuesdays will offer £10 tickets to under-30s on Tuesday evening performances, and Hi Five will offer £5 tickets to the unwaged on Sunday matinee performances. The new ticket prices will apply to select productions in 2018 starting with Charles Court Opera’s The Mikado, with further productions to be announced.

Islington, despite being widely recognised as one of the more affluent London boroughs, has a wide disparity in wages, with nearly 10% of working age residents claiming out of work benefits. Nearly 45% of the Borough is also under the age of 30 – 7% over the national average.

King’s Head Theatre Executive Director Fiona English says: “The King’s Head Theatre has long been among the most ethically and socially responsible fringe theatres in the UK. We were the first to introduce an in-house Equity agreement to ensure actors that work with us are paid a fair wage and more recently, introduced a gender policy which pledges that at least half of all creatives we employ to work on our productions will identify as non-male. I am delighted to announce that we are taking steps to increase the accessibility of our venue to young people and the unwaged with these new ticket prices.”

Artistic Director Adam Spreadbury-Maher says: “At the King’s Head Theatre, we pride ourselves on artistic excellence and our unapologetically broad programme of work. I believe it is vital that the diversity of our audience reflects the diversity of the work we present onstage and hope that the introduction of these new ticket prices means we will welcome new audience members through our doors for the first time in 2018 to enjoy the exciting, challenging and varied productions we have coming up.”

The King’s Head Theatre was established in 1970. The most ethically and socially responsible fringe theatre in the UK, we are known for our challenging work and support of young artists. Last year 116,151 audience members saw a show of ours: 44,607 at our 110-seater home on Upper Street and 71,544 elsewhere. At our home in Islington we had 774 performances last year of 95 different shows. We are committed to fighting prejudice through the work we stage, the artists and staff we work with and by producing work for minority audience groups. We believe in fair pay for all on the fringe and create accessible routes for early career artists to stage their work; work we are passionate about. Last year we announced the theatre is on the move. Subject to a fundraising campaign, the King’s Head Theatre will move into a custom-built space in the heart of Islington Square, directly behind its current home securing the future of the venue for generations to come.

The National Theatre’s new musical Hex returns to the Olivier theatre for Christmas, after its original 2021 opening was delayed due to covid. The … END_OF_DOCUMENT_TOKEN_TO_BE_REPLACED

As it celebrates its 8th anniversary in the West End, The Play That Goes Wrong, the Olivier Award-winning smash hit announces an extension to the … END_OF_DOCUMENT_TOKEN_TO_BE_REPLACED

Producer Josh Andrews has today announced the lead cast for the UK tour of Peter James’ Wish You Were Dead: George Rainsford, will star as James’ … END_OF_DOCUMENT_TOKEN_TO_BE_REPLACED

MAMMA MIA! THE PARTY, London’s premier dining experience, is delighted to announce the new cast arriving at Nikos Taverna on the Greek island of … END_OF_DOCUMENT_TOKEN_TO_BE_REPLACED

Perform Productions is delighted to announce the cast and creative team for the West End premiere of Magical Merlin this October half-term. The … END_OF_DOCUMENT_TOKEN_TO_BE_REPLACED