Nicholas Hytner will direct the world premiere of Alan Bennett’s Allejujah!, which previews at the Bridge Theatre from 11th July 2018 with Opening Night on 18th July and running to 28th September 2018. Designed by Bob Crowley, Allelujah! will have lighting by Natasha Chivers and music by George Fenton. Tickets on sale from 23rd February, 201 for priority members with public booking opening on Friday 2nd March 2018 at 10am. Casting for Allelujah! will be announced shortly.

The Beth, an old-fashioned cradle-to-grave hospital serving a town on the edge of the Pennines, is threatened with closure as part of an NHS efficiency drive. Meanwhile, a documentary crew eager to capture its fight for survival follows the daily struggle to find beds on the Dusty Springfield Geriatric Ward, and the triumphs of the old people’s choir (newest member: the Pudsey Nightingale).

Alan Bennett’s new play is as sharp as The History Boys and as funny as The Lady in the Van.

Allelujah! will be the tenth collaboration between Bennett and Hytner. They first worked together on Bennett’s adaptation of The Wind in the Willows for the National Theatre in 1990. Then followed The Madness of King George III, The Lady in the Van and The History Boys, all of which were also seen on film, The Habit of Art, People and the double bill Untold Stories.

Alan Bennett is a playwright, screenwriter, actor and author. Following a hugely successful writing and performing debut in 1960 at the Edinburgh Festival with Beyond The Fringe, his first play Forty Years On was produced in 1968. Bennett is the recipient of numerous awards for his work with Hytner including, for The History Boys, the Olivier, the Critics’ Circle, the Evening Standard and South Bank Show awards as well as multiple Broadway honours.

Nicholas Hytner is, with Nick Starr, Founding Director of the London Theatre Company. He was Director of the National Theatre from 2003 to 2015, where the productions he directed included The History Boys, Hamlet, One Man, Two Guvnors, and Othello. His films include The Madness of George III, The Lady in the Van and The History Boys. His book Balancing Acts was published by Jonathan Cape last year. Hytner directed Young Marx, the opening production the Bridge as well as Julius Caesar, the current production, running until 15th April. 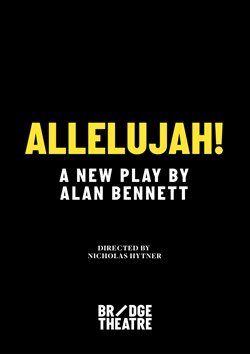 Frances works on the book’s pages of a Sunday newspaper. She’s quiet and capable, but nobody takes much notice: her face is pressed to the window, on the outside, looking in. One evening, driving back to London after visiting her infuriating parents, she comes across an upturned car crumpled on the side of the road. She waits with the injured driver, Alys Kyte, until the ambulance arrives. Later, when Alys’s famous family gets in touch, Frances finds herself for the first time ushered into the world on the other side of the window. And she begins to wonder: what would it take to become a player?

A gripping psychological thriller that excavates the fault line that separates the entitled from the unentitled.

Lucinda Coxon’s previous theatre writing credits include Herding Cats, Happy Now, The Eternal Not, Nostalgia, The Shoemaker’s Wife, Vesuvius, Wishbones, Three Graces, The Ice Palace and Waiting at the Water’s Edge. Her screenwriting credits include the multiple award-winning The Danish Girl starring Eddie Redmayne and Alicia Vikander, The Crimson Petal and the White starring Romola Garai for BBC, Wild Target starring Emily Blunt, The Heart of Me starring Paul Bettany and Helena Bonham-Carter and the forthcoming The Little Stranger starring Domnhall Gleeson and Ruth Wilson.
Alys, Always was Harriet Lane’s debut novel, published in 2012, and was followed in 2014 with Her. Previously Lane wrote for the Guardian and the Observer as well as Vogue and Tatler.

A B S O L U T E M U S I C : S H O S T A K O V I C H
On Monday 5 March 2018 at 7.45pm Simon Russell Beale, actor, author and music historian, will curate the second of a series of evenings inspired by works of chamber music this time focussing on Shostakovich’s String Quartet No. 8 and the composer’s fraught relationship with Stalin and the Soviet authorities. Russell Beale will be joined on stage by Nikki Amuka-Bird and Andrew Scott for a collection of poems and short dramatic readings to accompany a performance by the acclaimed Carducci Quartet of this masterpiece, written following Shostakovich’s agonised decision to join the Communist party and dedicated “to the victims of fascism and the war”.

Tickets are £20 and £25 with some general admission stage floor spaces at £5.
www.bridgetheatre.co.uk

The National Theatre’s new musical Hex returns to the Olivier theatre for Christmas, after its original 2021 opening was delayed due to covid. The … END_OF_DOCUMENT_TOKEN_TO_BE_REPLACED

As it celebrates its 8th anniversary in the West End, The Play That Goes Wrong, the Olivier Award-winning smash hit announces an extension to the … END_OF_DOCUMENT_TOKEN_TO_BE_REPLACED

Producer Josh Andrews has today announced the lead cast for the UK tour of Peter James’ Wish You Were Dead: George Rainsford, will star as James’ … END_OF_DOCUMENT_TOKEN_TO_BE_REPLACED

MAMMA MIA! THE PARTY, London’s premier dining experience, is delighted to announce the new cast arriving at Nikos Taverna on the Greek island of … END_OF_DOCUMENT_TOKEN_TO_BE_REPLACED

Perform Productions is delighted to announce the cast and creative team for the West End premiere of Magical Merlin this October half-term. The … END_OF_DOCUMENT_TOKEN_TO_BE_REPLACED