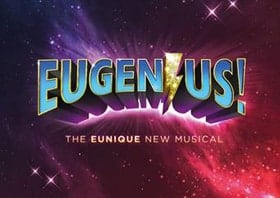 After a successful debut concert performance at the London Palladium last year, Warwick Davis and Kevin Wood are delighted to announce the full-scale production of the British cult musical EUGENIUS! at The Other Palace from 22nd January until the 3rd March 2018.

Written by Ben Adams and Chris Wilkins, “EUGENIUS!” tells the story of Eugene, a teenage boy whose nightly dreams of a distant world of heroes and villains may just be the ticket to him creating his very own comic book movie in Hollywood. Joined by his best friends ‘Janey’ and ‘Feris’, our comic writing genius must discover the true meaning of growing up, finding the superhero within, saving the world from both earthbound villains and possibly those from distant galaxies, and along the way, falling in love.

The production is produced by legendary “Star Wars” and “Harry Potter” actor Warwick Davis and features the voice of Prince Vultan himself, Brian Blessed. Warwick said, “We are thrilled to be bringing an original British musical to The Other Palace. After a tremendous concert performance at the London Palladium last summer we can’t wait to see the fully staged production. Ben and Chris have written this incredible 80’s inspired score and includes the songs ‘Go Eugenius’ and ‘Comic Book Kind of Love’, which received popular acclaim last year’.

The book, music and lyrics for ‘EUGENIUS!’ are written by Ben Adams and Chris Wilkins. Award-winning Ian Talbot will direct. Ian was previously the Artistic Director at the Regents Park Open Air Theatre for 20 years, for which he received an OBE. He has directed ‘Annie Get Your Gun’ and ‘Lend Me A Tenor’. The creative team is completed by Aaron Renfree who will choreograph, sound design by Gareth Owen, lighting by Andrew Ellis, musical supervision by Stuart Morley and musical direction by Darren Lord. Set and costume design will be by Hannah Wolfe and the show’s design features specially commissioned comic book artwork by Marvel artist, Simon Williams (Transformers, Spider Man, Marvel Heroes, The Incredible Hulk).

Music from ‘EUGENIUS!’ will be released from today and is available on Spotify, Apple Music, Deezer, Google Play, YouTube and all other music services.

The Other Palace opened in February 2017 as a home for musical theatre. Discovering, developing and reimagining musicals is at the heart of what The Other Palace is about. The spaces are used to nurture the next generation of musicals, and the creatives behind them; celebrating the very best of the art form, from the established to the brand new.

The National Theatre’s new musical Hex returns to the Olivier theatre for Christmas, after its original 2021 opening was delayed due to covid. The … END_OF_DOCUMENT_TOKEN_TO_BE_REPLACED

As it celebrates its 8th anniversary in the West End, The Play That Goes Wrong, the Olivier Award-winning smash hit announces an extension to the … END_OF_DOCUMENT_TOKEN_TO_BE_REPLACED

Producer Josh Andrews has today announced the lead cast for the UK tour of Peter James’ Wish You Were Dead: George Rainsford, will star as James’ … END_OF_DOCUMENT_TOKEN_TO_BE_REPLACED

MAMMA MIA! THE PARTY, London’s premier dining experience, is delighted to announce the new cast arriving at Nikos Taverna on the Greek island of … END_OF_DOCUMENT_TOKEN_TO_BE_REPLACED

Perform Productions is delighted to announce the cast and creative team for the West End premiere of Magical Merlin this October half-term. The … END_OF_DOCUMENT_TOKEN_TO_BE_REPLACED