You are here: Home / Plays / Mary Stuart at Duke of York’s Theatre 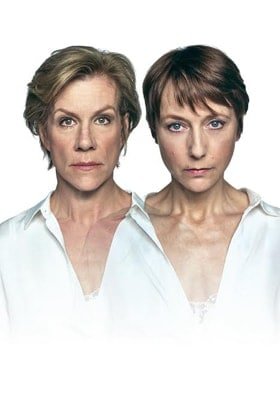 Following a critically acclaimed, sold-out season at the Almeida in 2016-17, Robert Icke’s new adaptation of Mary Stuart transfers to the Duke of York’s Theatre in London’s West End from Saturday 13 January for a limited run. The production will then visit Theatre Royal Bath from Wednesday 4 – Saturday 14 April, Salford Lowry from Tuesday 17 – Saturday 21 April and Cambridge Arts Theatre from Monday 23 – Saturday 28 April 2018.

Schiller’s political tragedy takes us behind the scenes of some of British history’s most crucial days. Playing both Elizabeth I and Mary Stuart, Juliet Stevenson (Hamlet) and Lia Williams (Oresteia) trade the play’s central roles, decided at each performance by the toss of a coin.

Juliet Stevenson is one of Britain’s leading actors. She has worked extensively for the Royal Shakespeare Company, the National Theatre and the Royal Court, winning an Olivier award for her performance as Paulina in Death and The Maiden in 1991. Most recent theatre credits include starring roles in Mary Stuart and Hamlet (both directed by Robert Icke, the latter currently playing in the West End) and of course Beckett’s Happy Days at The Young Vic which played to huge critical acclaim and due to popular demand returned for a second run. Her films include Truly, Madly, Deeply, Bend it Like Beckham, When Did You Last See Your Father, Being Julia, Pierrepoint, Mona Lisa Smile and Diana and Departure. Recent television work includes starring roles in Williams brothers’ thriller One of Us for BBC1 and Sky Living’s supernatural thriller The Enfield Haunting, as well as playing series regulars on two series of Atlantis and The Village. Other television work includes Place of Execution, The Accused, The Hour and White Heat. Upcoming releases include feature film Let Me Go. In addition to
her Olivier award, Juliet has been nominated a further four times and is four times BAFTA nominated for her film and television work. She was awarded a CBE in 1999.

Lia Williams most recently appeared in the Almeida’s productions of Mary Stuart and Oresteia (Olivier Award nomination for Best Actress) as well as Harold Pinter’s Celebration. Other theatre credits include The Revengers’ Comedies in the West End (Critics Circle Most Promising Newcomer Award, Olivier Award nomination for Best Comedy Performance), Old Times in the West End, Arcadia and Skylight on Broadway, at the National Theatre and in the West End (Tony and Olivier Award nominations for Best Actress), Earthquakes in London, The Hothouse and Mappa Mundi at the National Theatre, Oleanna, King Lear and My Child at the Royal Court, The Homecoming at the Gate Theatre, Dublin, in the West End and on Broadway, and The Lover and The Collection at the Donmar Warehouse. Her television credits include Strike: Silkworm, The Missing, The Crown, Secret State, Doc Martin, May 33rd (BAFTA nomination for Best Actress), The Russian Bride, Imogen’s Face, A Shot Through the Heart, Flowers of the Forest, Seaforth and Mr Wroe’s Virgins. Film includes The Foreigner, Jonathan Toomey, The King is Alive, Different for Girls, The Fifth Province, Firelight, Dirty Weekend and La Suite Blanche-Neige. As Director, her credits include The Match Box for the Liverpool Playhouse and the Tricycle Theatre and films Feathers, The Stronger (BAFTA nomination for Best Short Film), Dog Alone and the feature documentary Nanabozhung.

Robert Icke is a writer and theatre director. He is currently Associate Director at the Almeida where his work includes adapting and directing Mary Stuart, Uncle Vanya, Oresteia (also West End) and 1984 (co-created with Duncan Macmillan, also Broadway, West End, National and International tours). As director, his productions include Hamlet (starring Andrew Scott, also West End), The Fever, Mr Burns (Almeida), The Red Barn (National Theatre), Boys, Romeo and Juliet, Decade (Headlong, where he was Associate Director until 2013). For Oresteia, Robert won Best Director in the Critics Circle and Evening Standard Theatre Awards in 2015, and the Olivier Award for Best Director in 2016.