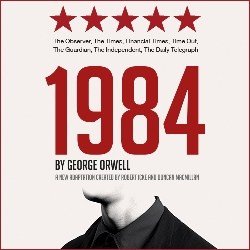 The revival of Robert Icke and Duncan Macmillan’s brilliant 2013 interpretation of George Orwell’s “Nineteen Eighty-Four” is timely and this is a fine new production, well staged and performed. The year 1984 was 36 years in the future when Orwell wrote the book and it is now 30 years in the past.

It was this fact that led me to conclude at the end of the play that contrary to the conventional description “George Orwell wrote a book as a prophecy of the future” (as one edition of the book describes it) it is not actually a sort of science fiction at all. It is about the present – any present.

Early in the play one character says “We should never have trusted them” and that is applicable in any time and under any political system. Systems are not “all the same” – that is too cynical – but all of them let us down one way or another. This production unusually focuses in part on the Appendix of the novel “The principles of Newspeak”. As Orwell describes it “The purpose of Newspeak was not only to provide a medium of expression for the world-view…but to make all other modes of thought impossible”. On the day I saw the play the British Prime Minister had (effectively) announced that the Oldspeak descriptor of the terror Army “Islamic State” was no longer to be used – I haven’t learned the Newspeak version I have to use now…but you get the point! “A beautiful thing the destruction of words”

The propensity to wage war is another timeless imperative of most political leaderships – in 1984 it is a constant as one power block fights another and then, capriciously, swaps sides to take on a former ally. In the twenty-first Century “My enemy’s enemy is my friend” is similarly opportunist to an extent that today, in the Middle East, we have long since lost track of who the “good guys” are – if there are any. So war is obscure in its objective and ephemeral in its alliances. The “Something must be done” paradigm triumphs, even is self-evidently something cannot be done – at least by us.

The place of the individual in the State is a key theme of “1984” and Winston Smith is the pawn in the sinister establishment’s game. Smith is played with an air of bewildered resignation by Matthew Spencer. Julia, his girlfriend, is played rather feistily by Janina Harouni (a fine professional debut by Harouni). Early in the play we see Smith make someone a non-person by deleting the central computer record of this person whose name is Ogilvy. This act deletes not just the record but in effect Ogilvy himself. He does not exist, and never existed. I found this personally rather creepy because on the big screen we see Ogilvy’s record before he is deleted and we see that he was born on 23rd November 1946, which happens precisely to be this reviewer’s date of birth. I mention this coincidence only to say that it came home instantly to me all of us are individuals and we live under the direction of an all powerful State even though ours is more benign than Winston Smith’s. The Trolley of “Victory Gin” is the opium of the masses for Smith and there is a Lottery to offer hope of something – sound familiar? “I’m a good liar – it’s the only way to be safe” is the sinister model for those who want to survive.

But if they want to get you they will, there are no countervailing forces to stop them. No media other than the official media, no acceptable ideology other than the prescribed one which itself is full of contradictions and paradoxes. “War is Peace”, “Freedom is Slavery” and the rest. Of course modern Britain is not like this but the subliminal pressure to conform, to be “politically correct” – effectively in an Orwellian way sometimes to declare that Black is White is not unpresent along that bumpy road!

“1984” is a gripping, superbly staged and realistically acted play that speaks to our times as much as Orwell’s book did in 1948 – and thereafter of course. As with “Animal Farm” Orwell’s primary target was the Soviet Union and the satire is aimed at the pursuance and prosecution of “Thoughtcrime” by that evil empire. But the idea of a singularity of culture and behaviour and belief is common today – in Saudi Arabia and elsewhere in parts of the Islamic world of course, but not only there. There are echoes of George Bush and Tony Blair in “1984” and is the division of the world into Superstates called Oceania, Eurasia and East Asia that different from our world dominated by the USA, the European Union, Russia and China? Orwell made us think and this modern presentation of his greatest work does the same. If it helps realise both the power and the fragility of language in society and the preposterous notion of good and bad speak it does a fine job. I think that it does. “In a time of universal deceit telling the truth is a revolutionary act”.

Orwell’s ideas have become our ideas; his fiction is often said to be our reality. The ‘definitive book of the 20th century’ (The Guardian) is re-examined in a radical new staging exploring surveillance, identity and why Orwell’s vision of the future is as relevant now as ever.

Nominated for Best New Play at the 2014 Olivier Awards.

This entertaining new musical is very fortunate in having as its leading lady the terrific Katie Elin-Salt: she is onstage almost throughout, singing … END_OF_DOCUMENT_TOKEN_TO_BE_REPLACED

“Keep it shallow, keep it pretty, keep it moving,” declares Justin Vivian Bond, letting the audience determine for themselves what precisely is really … END_OF_DOCUMENT_TOKEN_TO_BE_REPLACED

This play didn’t do that well on Broadway the first time around in 1963, and did worse the second time around, even with a revised script, running in … END_OF_DOCUMENT_TOKEN_TO_BE_REPLACED

One of the very few good things about the COVID pandemic is that the opportunities to live stream theatre performances have increased exponentially, … END_OF_DOCUMENT_TOKEN_TO_BE_REPLACED