Home » Reviews » 2:22 – A Ghost Story will transfer to The Criterion Theatre

Producer Runaway Entertainment has announced that the critically acclaimed, smash hit, supernatural thriller 2:22 – A Ghost Story will transfer for a second time to The Criterion Theatre where it will play a 17.5 week season opening on 7 May 2022. The production began its life last summer at the Noel Coward Theatre starring Lily Allen, Julia Chan, Hadley Fraser and Jake Wood. It then transferred to the Gielgud Theatre for 10 weeks from 4 December 2021. The production there starring Stephanie Beatriz, James Buckley, Elliot Cowan and Giovanna Fletcher completed its run on 12 February 2022. The cast for the transfer to the Criterion Theatre will be announced soon.

The West End theatre event of the year will return this summer by popular demand. 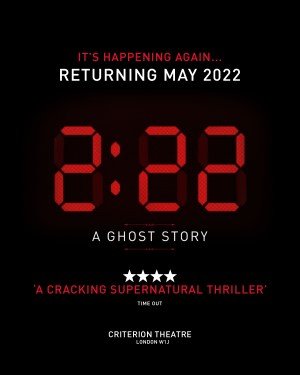 Following two record-breaking seasons at the Noel Coward and Gielgud Theatre with a host of acclaimed star performances, this edge-of-your-seat, supernatural thriller returns once again for a brand-new limited engagement at the Criterion Theatre.

2:22 is written by award-winning writer Danny Robins, creator of the hit BBC podcast The Battersea Poltergeist, and is directed by Matthew Dunster. Look out for the clues to unlock the mystery in this brilliantly funny and intriguing play; it’s an adrenaline-filled night where secrets emerge and ghosts may or may not appear…

Danny Robins said: “I’m so damn thrilled that the 2:22 – A Ghost Story journey gets to continue. The response to the play so far has blown me away. Since I was a kid I’ve been obsessed by ghost stories, and I’m so glad that theatre audiences seem to feel the same way. My aim, writing the play, was to create a fun, spooky, thought-provoking night out, a show that leaves you buzzing, on the edge of your seat, questioning what you believe. If you haven’t seen it yet, I hope you’ll come down to the Criterion and see what you believe… if you dare!”

Matthew Dunster said: “This feels like an extraordinary journey for a new play. It sounds like an obvious thing to say, but even in this crazy time we’re living through, people really seem to want to see this show. Sell out runs with two exciting and surprising casts at two West End theatres; and now a run to look forward to at The Criterion where there’ll be more surprises and more excitement. I just feel terrifically proud of Danny and all the team. And really grateful to the Up For It audiences who have been coming along.”

What do you believe? And do you dare discover the truth?

“THERE’S SOMETHING IN OUR HOUSE. I HEAR IT EVERY NIGHT, AT THE SAME TIME”
Jenny believes her new home is haunted, but her husband Sam isn’t having any of it. They argue with their first dinner guests, old friend Lauren and new partner Ben. Can the dead really walk again? Belief and scepticism clash, but something feels strange and frightening, and that something is getting closer, so they’re going to stay up… until 2:22… and then they’ll know.

“A slick, chilling, romp of a play” The Guardian

2:22 – A Ghost Story is produced by Tristan Baker and Charlie Parsons for Runaway Entertainment, Isobel David and Kater Gordon.

There’s a warm and welcoming presence about Katie Arnstein anyway, although offering a sweet to audience members as we filed in helps too. Also, the … END_OF_DOCUMENT_TOKEN_TO_BE_REPLACED

The on-stage tiling makes it feel very much like certain scenes are set in a swimming pool, which may be stating the obvious but in a performance … END_OF_DOCUMENT_TOKEN_TO_BE_REPLACED

“I am a little bit of a nerd,” smiles Joe Sellman-Leava, playing himself, or at least a version of himself he’s willing to portray to audiences at the … END_OF_DOCUMENT_TOKEN_TO_BE_REPLACED

This is the kind of show that will preach largely to the converted, if not the choir itself, although this is probably by default rather than design. … END_OF_DOCUMENT_TOKEN_TO_BE_REPLACED

Cabaret is not just the name of a highly successful musical and film, but according to my good buddies at Wikipedia is a form of theatrical … END_OF_DOCUMENT_TOKEN_TO_BE_REPLACED