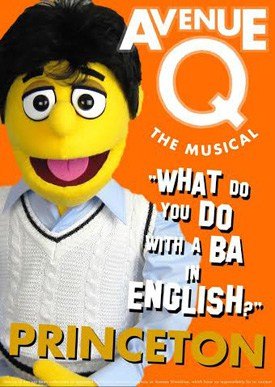 “Being on an elevator, when somebody shouts ‘Hold the door!’ / ‘No!’ / Schadenfreude! ‘F*ck you lady, that’s what stairs are for!’”

Such is the quirky but nonetheless humorous style of lyric found in Avenue Q, which is one of those musicals that doesn’t seem to quite go away: it is hard to believe that it has been almost five years since I sat in the Wyndham’s Theatre near Leicester Square on the show’s West End closing night.

There are, of course, people who were glad to see it go, and equally saddened that it is on tour (again), but they are vastly outnumbered by the extremely cosmopolitan crowd at the Churchill Theatre Bromley who very warmly responded to the show’s overall message that “Except for death and paying taxes / Everything in life… is only for now”. It was pleasing to look around and see an audience from all walks of life, and it is to this show’s credit that it attracts such a broad following.

It says something of the times we live in that this production feels it necessary to put in an (albeit witty) announcement requesting mobile phones are not used during the performance: the West End run, if I recall correctly, didn’t have one. Avenue Q has never had a particularly elaborate set. Like other breakneck paced shows that came after it, such as The Curious Incident of the Dog in the Night-Time, the set never changes irrespective of whether the action is at a wedding, outside an apartment, in the New York subway or at the top of the Empire State Building. There are only very minor alterations in this touring production.

The main complaint with the show’s previous incarnation was that it was a tad too loud – ‘My Girlfriend Who Lives in Canada’ was almost indecipherable to those who hadn’t bought the cast recording and read the libretto contained therein. Here, Richard Lowe’s Rod gives a more subtle performance than the likes of Jon Robyns and Daniel Boys before him, leaving nobody left behind.

Lowe’s Princeton is an absolute delight, carrying the show with ease and confidence. If his double billing was impressive, Stephen Arden’s triple billing as Nicky, Trekkie Monster and a ‘Bad Idea Bear’ is equally so, and it became clear as the evening progressed that this was a company not only successfully entertaining a crowd but having a lot of fun amongst themselves doing so. 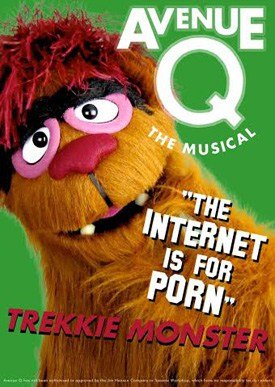 Christmas Eve (Arina Ii) is less shouty than she was in town; again, the subtler approach is triumphant, creating a more likeable character, which more than outweighs any loss in the impact of punchlines. Each of the actors stamps their own authority on their characters, and I would urge anyone who has seen previous Avenue Q productions to catch this tour if they can: it’s Avenue Q like Avenue Q has never been done before (the number of different sexual positions assumed in ‘You Can Be As Loud As The Hell You Want’ is greater than ever), and it works.

The puppets, as always, take some getting used to for the uninitiated, but by the end, there is some disappointment that the puppets themselves don’t make an appearance at curtain call, such is the successful integration of puppet and actor. For the serious lover of musical theatre, there are recognisable nods to classics in the musical theatre canon. Princeton’s musing that “something’s coming, something good” is clearly inspired by West Side Story. And who hasn’t seen a musical where someone has dreams of achieving a substantial personal goal? (I’m thinking Mama Rose in Gypsy and Elphaba in Wicked for starters.) Avenue Q offers at least three such scenarios: Brian (Richard Morse) wants a successful comedy career, Kate Monster (Sarah Harlington) would like to run a special school serving, um, just monsters, and Christmas Eve would love to have more clients for her therapy business. There’s a fourth, rather dubious ‘dream’, held by Princeton, who would dearly love to find his purpose.

I recall an episode of BBC Television’s Strictly Come Dancing where somebody gave a genuinely outstanding performance. One of the panellists, Craig Revel-Horwood, simply said, “I really can’t think of anything negative to say about this.” Having seen this production of Avenue Q, I can only echo very similar sentiments. There’s a reason why this tour has continued to be successful in an era where more than a few touring productions have either curtailed their runs or cancelled them altogether: it’s absolutely not suitable for young children, or anyone of a sensitive disposition, but it’s hilarious in its ridiculousness. And any show that reminds us all, through song, that “David Cameron… is only for now!” is worth a look. Avenue Q is back, and better than ever before.

Following five years in the West End and sell-out runs worldwide (packed with mischief, bad behaviour and political incorrectness) this hugely entertaining show is hitting the road on a brand new tour!

Created by Jeff Marx and Robert Lopez (co-creator of Book of Mormon and writer of the songs for Disney’s Frozen) Avenue Q is an irresistibly charming musical which tells the story of the loveable characters on a downtown New York street trying to make sense of life’s burning issues.

Hilarious, cheeky and uproariously entertaining, with a terrific batch of songs performed by a cast of hugely talented performers and puppets, Avenue Q is the musical like no other.

This entertaining new musical is very fortunate in having as its leading lady the terrific Katie Elin-Salt: she is onstage almost throughout, singing … END_OF_DOCUMENT_TOKEN_TO_BE_REPLACED

“Keep it shallow, keep it pretty, keep it moving,” declares Justin Vivian Bond, letting the audience determine for themselves what precisely is really … END_OF_DOCUMENT_TOKEN_TO_BE_REPLACED

This play didn’t do that well on Broadway the first time around in 1963, and did worse the second time around, even with a revised script, running in … END_OF_DOCUMENT_TOKEN_TO_BE_REPLACED

One of the very few good things about the COVID pandemic is that the opportunities to live stream theatre performances have increased exponentially, … END_OF_DOCUMENT_TOKEN_TO_BE_REPLACED