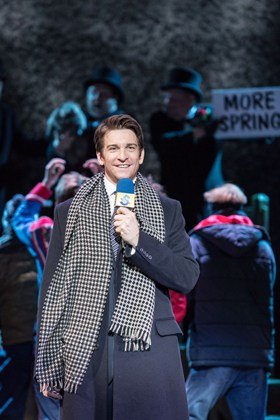 The 2nd February is an auspicious day in history. Not only because in 1911 it was the day of the funeral of Queen Victoria, but in 1887 in Punxsutawney, Pennsylvania it was the first time an event occurred which has continued every year since. This event was commemorated in a very successful film in 1993 and has finally been turned into a musical comedy with music and lyrics by Tim Minchin, and a book by Danny Rubin. I am, of course talking about Groundhog Day which has opened for a limited run at the Old Vic here in London Town.

On February 1st, misanthropic TV meteorologist Phil Connors (Andy Karl), Associate Producer Rita Hanson (Carlyss Peer), and cameraman Larry (Eugene McCoy) travel to Punxsutawney to cover the annual Groundhog Day festivities. Unfortunately, whilst on television, Phil appears to be a consummate professional, in the real world, he lets his cynicism and disdain for the general populous show. This is Phil’s fifth year of covering the event and he is pretty cynical about the whole thing believing he should be doing better things than wasting his time in an American small town. He hates his B&B, run by sweet old Mrs Lancaster (Julie Jupp) and he hates everyone he meets as he heads out to the groundhog ceremony at Gobbler’s Knob, just outside of the town. Once there, he covers the ceremony – ignoring his producer and cameraman completely – in his usual sardonic way, then proceeds back to town before heading home to Pittsburgh. Well that was the plan, but a huge blizzard – not forecast by Phil – has circled Punxsutawney closing the roads and forcing Phil and his team to spend another night in town. Still it’s only for one more day, isn’t it? Maybe not, as Phil wakes up the next morning to find it is once again the 2nd February and he is due to go to the Groundhog Day ceremony.

Sometimes, you get a really warm, fuzzy feel as soon as you walk into the auditorium of a new show and this was certainly the case with Groundhog Day. As soon as you enter you can’t help but be drawn to the stage and the magnificent ‘curtain’ comprising of assorted monitors showing broadcasts by Phil Connors. Having seen the film hundreds of times, I was really hoping that this wasn’t going to simply be a very dull scene by scene translation of the movie with a few songs bolted on and I am really happy to report that it wasn’t. True, all the great characters of the film were there, including the annoying Ned Ryerson (Andrew Langtree), the two barflys Ralph (Jack Shalloo) and Gus (Andrew Spillett) and the playful Nancy (Georgina Hagen). But these were developed into people in their own right and, for the first time ever, I actually warmed to Ned. As in all great musicals, the songs either moved the narrative on or added depth to the person singing and my one regret – which I know was unlikely – was that “You Don’t know Me” by Ray Charles” wasn’t in the show but I got over that due to Tim Minchin’s fantastic original score.

As a show, Groundhog Day relies heavily on two elements. The first is the character of Phil. We, the audience have to believe he is going through the repeated days and is being changed as a person each time he wakes at 6 am. Andy Karl was awesome in this role and it was easy to believe that the Phil at the end of the show was the same man but irrevocably changed from the Phil at the start. The second element is the relationship between Phil and Rita. Not really relevant but I thought this was the one part of the film that didn’t 100% work. However, in the musical version, Rita, as played by Carlyss Peer, was a woman prepared to stand her ground when needed – even if that meant going in front of the camera herself. Rita’s relationship with Phil is lovely as she starts out just putting up with his ‘artistic temperament’ and then moves along until the wonderful final scene. When it comes to the rest of the cast, they were all uniformly great with some fast costume changes and some of the best ‘frozen, not moving’ acting I’ve seen for ages.

Musical Director Alan Berry has a full band under his control and the music really fills the theatre. I can’t finish this section without mentioning Rob Howell’s marvelous and highly detailed set – which includes the cutest groundhog you will ever see – and the wonderful tricks that Director Matthew Warchus plays with the audience as Phil appears to be doing something on one side of the stage then suddenly appears back in his bed ready to start another 2nd February.

Summing up then, Groundhog Day is this year’s must-see musical. It is a pleasure to witness whether you are a fan of the movie or have never seen it. Everything about it is great and although it has a short run at the Old Vic, I really hope that someone is emptying a West End theatre right now so that the show can spend the next few years playing to packed houses and picking up the accolades it totally deserves.

The world premiere of Groundhog Day a new musical directed by Old Vic Artistic Director Matthew Warchus.
Groundhog Day is the story of Phil Connors (Andy Karl), a cynical Pittsburgh TV weatherman who is sent to cover the annual Groundhog Day event in the isolated small town of Punxsutawney, Pennsylvania, when he finds himself caught in a time loop, forced to repeat the same day again and again…and again. As each day plays out exactly the same as before Phil becomes increasingly despondent, but is there a lesson to be learnt through his experiences, will he ever unlock the secret and break the cycle?

Director Matthew Warchus, composer and lyricist Tim Minchin, choreographer Peter Darling and designer Rob Howell, four of the creators of the international sensation Matilda The Musical, have joined forces with writer Danny Rubin to collaborate on this new musical based on his 1993 hit film.