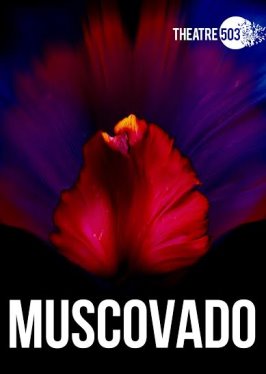 It’s cold outside but inside Theatre 503 it’s a furnace. Set in St Lucy, a Caribbean island at the height of the slave trade, Muscovado is a domestic drama fraught with tensions that spill, with the milk and sugar, beyond the proscenium arch and into the consciousness of the audience.

The script by Matilda Ibini is an absolute scorcher; cutting out a section of humanity she painfully examines the dark repercussions of abhorrent slavery in the homes both of slave and master. In one moment she invokes laughter from her audience, the next utter revulsion that discomforts the previous humour. Her script is neat and expertly conceived. Starting deceptively lightly, Muscavado gets ever sourer act by act until it’s terrible, awful conclusion which leaves one reeling. Like the pressing of the sugar cane rendered by Kitty, this play wrings the sap out of the audience and leaves them tossed on a dry, searing beach of horror. It’s brave to attempt to convey a theme so overtly epic as the slave trade but Ibini manages it with skill and flair.

And the brilliant script is expertly delivered by a finely tuned cast of just six who give this story the devotion and attention it deserves, believably pursuing the story throughout. Clemmie Reynolds as Kitty is immensely watchable as the bored girlish wife of a brutish captain, using cruelty for entertainment and becoming maddened by her own self-inflicted isolation. She shows the irony of being a female mistress who is in some ways as much of a commodity, as much of a victim, as the people she ‘owns’ and plays dominion over. Asa played by Alexander Kiffin is heart wrenchingly agonising to watch as he is preyed over time and time again. His love, Elsie, a proud woman who flees her home is beautifully portrayed by Damilola K Fashola who brings heaps of humour and tragedy to the performance, especially in the sexual abuse that is a strong theme throughout the play. Willa, the girl slave who grows old and experienced far far too quickly is played gorgeously by Sophia Mackay who has an uncanny knack of showing the violence done to her in moments of truly flinching theatre. Adam Morris as Parson Lucy is viperous and sly with despicable traits that both entertain and horrify. The music and choreography has been thought out and devised with care and to great effect; much of this is provided onstage by James Reynolds who also provides a counterpoint of the outsider to the household.

This is a production which has been lovingly and delicately crafted. The direction is superb and no detail has been missed. From the beautiful set to the commitment of the actors this play is clearly a labour of love and a massive achievement. It proves yet again that sometimes fringe theatre can and does stand head and shoulders above many West End shows that could only hope to achieve the same emotions in their audiences. This show is overwhelmingly compelling. Well done Burnt Out Theatre!

Brilliant new play about slavery in 1800s Barbados staged at Theatre503 before touring UK cities with links to the transatlantic slave trade.

Tori Scott needs to tell baristas in the sort of coffee shops that write customer names on paper cups in marker pen that it’s Tori With An ‘I’. While … END_OF_DOCUMENT_TOKEN_TO_BE_REPLACED

A child plays with an orange, and the old man works himself into the ground. Playful, rough, intimate and touchingly funny, Home is a piece that will … END_OF_DOCUMENT_TOKEN_TO_BE_REPLACED

Like most people, I think, I often have mixed feelings about a show I see. Occasionally, though it is rare, there will be a production where … END_OF_DOCUMENT_TOKEN_TO_BE_REPLACED