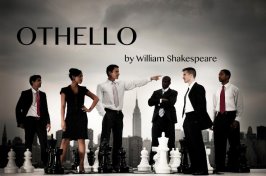 The Rose Playhouse is on its way to being up there with Shakespeare’s other ‘shining star’ the Globe Theatre. The Rose may be smaller and more rudimental but what it lacks in size and stature it makes up for with ambition, charm and pedigree.

In an intimate space hovering above and incorporating the site of The Rose’s archaeological dig, Othello is performed as a 21st century concept. The office setting is an inspired choice by director Pamela Schermann. Where else can you find such a den of vice and intrigue? A work environment where idle gossip can be spread not only at the water cooler, but via social media?

The original themes of deliberate mischief, greed, power and ambition have moved seamlessly from the shores of Venice and Turkey to the boardrooms of modern day London. Daily life today is still a war zone a battle for survival under the crippling costs of London living. Othello and Iago are soldiers with Othello being the ‘General Manager’ and Iago the impatient junior manager coveting his position. The use of deception and betrayal, rather than hard work and commitment to progress is a situation we are all familiar with – we all know somebody like that! Hitting somebody in the weak spot of their heart, rather than fighting them on their own terms is a coward’s act, all is not fair in love and war.

There is no focus on the race element of the story. Othello is oft referred to as a Moor, in keeping with the original text but the prejudice that is against him is more one of jealousy of his position and success. The expression of disapproval by Desdemona’s father would just as easily be of his daughter marrying a business man too busy for the attentions a marriage would need.

The company are faultless, each bringing their characters with ease into modern life, whilst retaining Shakespeare’s original sentiment. Othello (James Barnes) is beautiful, both in physical form and articulation. An excellent portrayal of a leader of business confident in killer negotiations, but lost in the ways of women, a show of strength and vulnerability. A man felled by his doubts of the love of his wife. As true in the 1600’s as is it is today, a woman can be ruined by the gossip of others; even when that woman is a professional with a flawless character such as Desdemona (sweetly played by Samantha Lock). She is a confident equal partner in Othello’s work and bed, an uneasy pairing that even love cannot save.

In a company of just five, it is easy for everybody to shine. The supporting characters of Amelia (Ella Duncan) and Cassio (Denholm Spurr) are both passionate and bright. Their unwitting involvement in the scandal that destroys the lives and loves of their colleagues is heartbreakingly innocent in its depiction of how far a wrong word or gesture can go, and the tragedy it can lead to.

The brightest star of all is the catalyst of all the trouble. Trevor Murphy’s stage presence is larger and almost more powerful than the Rose can handle. He seems truly possessed by the evil Iago with every bodily movement and expression. We the audience can see his Machiavellian actions as he controls the ruination through carefully placed words and evidence. Although we witness this treachery his representation of the ‘honest’ team mate is somehow still believable.

This is a marvellous re-imagining of the tale of Othello and Desdemona. Lying, cheating, murder and mayhem it’s just another day at the office! The use of lighting and the location and inclusion of the Rose’s dig site into the play adds a cold and sometimes sinister effect to the murderous outcome. This is a unique experience.

Returning to The Rose Playhouse, after their acclaimed production of The Taming of the Shrew in 2013 and the opera Orpheus and Eurydice in 2014, Time Zone Theatre presents a new, contemporary adaptation of William Shakespeare’s tragedy Othello. Director Pamela Schermann transfers the action to the cityscape of modern London. Here, in this high-flying executive business world, we dive into an abyss of power and intrigue, riddled with suspicion and jealousy. Beneath the surface of this civilised and polite environment we encounter brutality and callousness.

This fast-paced adaptation cuts Shakespeare’s tragedy Othello down to its five main characters and focuses on their relationship with each other. The entire play is set in the meeting room of the company’s office. Everyone is under constant surveillance, private and business lives entwine, workers are caught in a bubble without privacy or time off outside the Corporation. There’s always someone watching you, analysing your every move and waiting for an opportunity to stab you in your back.