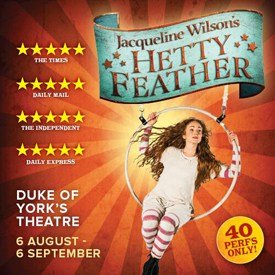 My views on boisterous children and the theatre have been documented elsewhere before (to summarise: I’m one of those not very nice people who think that the two should – generally speaking – be mutually exclusive), but the sense of anticipation on the part of children coming to see a theatrical adaptation of the Hetty Feather book series was very palpable. Dodging the crowds between Leicester Square Underground station and the Duke of York’s Theatre may be a chore for theatre regulars, but the hustle and bustle of this part of London is novel to some of the younger members of the audience, some of whom are from out of town and in the capital for at least part of their school summer holiday. No doubt meandering through pavements full to bursting with tourists, Friday evening pub customers, roadworks and merciless cyclists was part of the adventure for them.

Interestingly, once in the theatre, there were more adults than children munching confectionery during the evening’s proceedings – and I found myself in agreement with one little girl who loudly asked at the interval: “Why couldn’t they have eaten [sic] earlier?” At the said interval, at least one child, clearly inspired by Hetty Feather, wanted to run away from home because his mother wouldn’t let him join the queue for ice creams (he had, apparently, already had a lolly before the show).

I am not familiar with the Hetty Feather stories, so like many of the adults in the audience I found myself engrossed in the narrative. The musicians, Seamas H Carey and Luke Potter (who play, they said, the parts of ‘Seamas H Carey’ and ‘Luke Potter’ – that is, they are on stage musicians) had the audience clapping along to merry tunes well before the start time. One of their songs was about the Hetty Feather author, Jacqueline Wilson, and was quite a revelation for me, making my debut journey into the Hetty Feather world. Dame Jacqueline (she does not generally use the title, but honour where honour is due!) is responsible for a number of popular children’s series, the most notable of which, apart from Hetty, is ‘The Story of Tracy Beaker’. I really had no idea how prolific a writer she is.

Hetty Feather is undoubtedly a children’s story, and is predictable enough for the discerning, whether young or old. The stage adaptation, however, remarkably engrossing in its own right, with a thoroughly engaging cast led by Phoebe Thomas in the lead role of Hetty. If women’s roles in William Shakespeare’s time were played by boys, here, a number of minor girl parts are played by fully grown men. It is the dialogue that both delivers a punchline and makes things clear. Jem (Matt Costain) triumphantly declares: “I’m five!” He’d have been thirty-five unless he’d said that.

I do like the mischievousness and gregariousness of Hetty Feather. Like her counterpart Matilda in the musical of the same name over at the Cambridge Theatre, there is a certain sense of determination – which may be interpreted as bloody-mindedness, particularly in the Victorian society in which she was born into – but, you know, ‘you only live once’ (or ‘carpe diem’ in old money).

A particularly studious schoolgirl, on spotting me scribbling into my notebook, kindly asked in the interval if I would point out what she strongly felt was a glaring error in the show’s narrative. Trains on the Chatham Main Line, I am reliably informed, do not go into Waterloo, and Hetty Feather would never have travelled direct to Waterloo from Faversham, even in Victorian times, without having to change trains. The Chatham Main Line goes in and out of London Victoria, and these days there are some trains that go to St Pancras International. But never ever London Waterloo. There you have it. Children’s theatre directors beware: get your train lines right or your target audience will be on to you. Especially if they use the line in question to get to London to see your production!

The narrative, where it is right, allows for travelling circus skills to be displayed, and are ably performed by Matron Bottomly (also Matt Costain), a harsh but more realistic authoritarian than, say, Matilda The Musical’s Trunchbull character, and Madame Adeline (Nikki Warwick). The number of characters has been slimmed down from the book (so says the aforementioned child prodigy in the audience), to make a show that concentrates more on Hetty Feather, while still telling the story from Hetty’s perspective. This streamlined approach from adaptor Emma Reeves also ensures the stage is not too cluttered and the plot not overly complicated. It also means we are not subjected to a five hour show!

The way the story is told is very likeable. I am not putting myself in the shoes of a ten-year-old. It’s not too melodramatic or overbearing, and the sequence of events is surprisingly believable. We speak of certain shows being ‘child-friendly’. Here’s a show, marketed for children, that is ‘adult-friendly’ – it’s the grown-ups in the audience who openly gasp at the twists and turns in the plot. The children in the audience, of course, have seen the television series and read the books, so they know what’s going to happen. They are still impressed, however, with this live experience. I am too. And there are three more books in the Hetty Feather series – I very much hope these are adapted for the London stage as well. In the meantime, do see this one: you won’t regret it.

William Archer and Kenny Wax in association with Novel Theatre present a Rose Theatre Kingston Production
Adapted from best-selling children’s author Jacqueline Wilson’s novel, the tale of plucky Hetty Feather is brought to life on stage by Emma Reeves, the award-winning scriptwriter of BBC TV’s hit Wilson adaptation The Story of Tracy Beaker, and Olivier-nominated director Sally Cookson, whose critically acclaimed production of Jane Eyre seen at the Bristol Old Vic will be revived at The National Theatre this Autumn. Featuring a musical score by Benji Bowe, thrilling aerial and circus skills and a huge heart Hetty Feather is the must see show for this summer.

Following its sell out 2014 run in London’s West End and a 2015 Olivier Award nomination for Best Family and Entertainmen, Hetty Feather returns to the West End for a smashing summer season for 40 performances. Hetty Feather was abandoned as a newborn baby and brought up by foster parents. But now she’s six she has to return to the Foundling Hospital to start her education.

You’ll TREMBLE as she faces Matron Stinking Bottomly; THRILL as she discovers the squirrel house and Tanglefields Travelling Circus; GASP as she endures a night locked in the attic; QUAKE as she braves the scary streets of Victorian London and CHEER as she overcomes all in the search to find her real mother and a true family of her own.