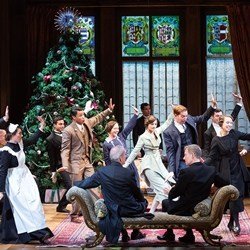 Although classified as an early (‘pleasant and conceited’) comedy in the first folio, the number of laughs brought to Christopher Luscombe’s Love’s Labour’s Lost are still wholly unexpected. Opening at the RSC in 2014, and with a successful subsequent transfer to the Chichester Festival Theatre, Love’s Labour’s Lost is now remounted in London, with only minor cast changes and staging throughout. It is not difficult to see why the RSC’s version of this little-performed play has become so popular; presented as part of a double bill with Love’s Labour’s Won (better known as Much Ado About Nothing) the paired plays straddle the Great War in an Edwardian era of extravagance that is savagely threatened at the close of Love’s Labour’s Lost.

Set in summer 1914, the plot (for those unfamiliar with this play, as I was, though let it be said the story in this production is utterly accessible) concerns the King of Navaare and his three companions, who have sworn (not terribly willingly, as is the case of Lord Berowne in this party) to a three-year period of fasting, little sleep, continual study and, critically, the absence of female company. Naturally, the Princess of France and her 3 ladies come a-calling, wreaking havoc amongst the men as they, one by one, fall head over heels for a different lady, and are forsworn. Whilst the men’s long exclamations of love (being found ‘in thine eyes’) have the propensity to rattle a feminist like me, Luscombe wrings every ounce of comedy out of the set-up, both within the script and in the many perfectly executed gimmicks and knowing glances to the audience. Moreover, the ladies display a strength and bemusement that never allows this play to venture into the misogynistic. Here, it is the men that are fools – foolishly in love, no less – whilst the women stand their ground: a pleasant change from many of Shakespeare’s other unashamedly patriarchal offerings.

Yet Love’s Labour’s Lost is a ‘comedy’ that ends, rather peculiarly, on an ominous note: an envoy brings word that the King of France has died and the Princess must return home, postponing all marriages for a year. Moreover, in this version of the play, it is insinuated that our four wooers have been conscripted. What will become of them is anyone’s guess, but this (rather Downton Abbey-esque) play leaves a sour taste amongst the audience, bringing us down to earth with its rather brutal, fearful ending, which contrasts nicely with all the frivolities of before.

The cast is superb; there is no real feeling of a ‘star’ here, rendering it a true ensemble. There are nice turns by many in the secondary plot line – that of Spanish Don Armado (John Hodgkinson) and his sidekick Moth (a beautifully-voiced Peter McGovern – for there are various songs in this production), as well as the rustic Costard (in a lovely portrayal by Nick Haverson). The set, similarly, is sumptuous, as are the costumes; this production, in general, has a rather luxurious feel to it, which again juxtaposes with the horror that is to come in the Great War.

Having seen Love’s Labour’s Lost, I am now compelled to see Won; in fact, it is clear that the two plays should be seen in one sitting, speaking so heavily to each other as they do. A terrific, funny, moving production, if you can see only one of the plays before it ends in March 2017, Love’s Labour’s Lost does come with a hearty recommendation from me, given that watching it is far from laborious indeed.

‘We lose ourselves to keep our oaths.’
Summer 1914. In order to dedicate themselves to a life of study, the King and his friends take an oath to avoid the company of women for three years. No sooner have they made their idealistic pledge than the Princess of France and her ladies-in-waiting arrive, presenting the men with a severe test of their high-minded resolve.

Two sparklingly funny romances are brought together by the innovative matching of events, characters and themes. Directed by Christopher Luscombe, with a dazzling design by Simon Higlett and glorious music by Nigel Hess, the two productions are set either side of the First World War. Love’s Labour’s Lost conjures up the carefree elegance of a pre‑war Edwardian summer, whilst Much Ado About Nothing presents a changed world with the roaring 20s just around the corner. An immensely talented ensemble perform in both plays which can be seen as single performances or enjoyed as one extraordinary event on our two‑show days.

Love’s Labour’s Lost RSC at the Theatre Royal Haymarket
8 Haymarket, London, SW1Y 4HT
Booking Until: 18th Mar 2017
Part of a double-bill with Much Ado About Nothing