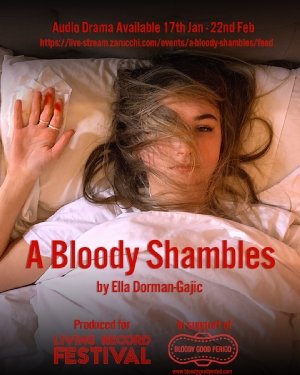 It will not have gone unnoticed by those who have direct experience of period poverty (as well as many who do not) that the Period Products (Free Provision) (Scotland) Act 2021 was granted Royal Assent in January, making it mandatory for local authorities to make period products available, without charge, to those who would otherwise have to go without. In England, there is a scheme in place (at the time of writing) for free period products in schools and colleges, although there is some evidence that some students have had to go without during pandemic lockdowns when schools and colleges were closed.

Jess (Ella Dorman-Gajic) was living with her mother, both having moved in with her mother’s new partner, Roger, who was so unsympathetic and intolerant of Jess that she was thrown out of his house. Her mother appeared to have been so besotted with Roger that she couldn’t see the wood for the trees, and did nothing to defend her daughter or, it would seem, do anything at all to ensure she had a place to sleep and shower. Forced to fend for herself, Jess survives thanks to a hostel and a local foodbank.

This audio play is relatable to people who have experienced the menstrual cycle (he says), and while it may at surface level seem a little contrived in presenting a ‘whatever possibly can go wrong goes wrong’ narrative, it highlights very effectively the sorts of problems that arise from not being able to afford tampons and/or sanitary pads. The narrative itself breaks the audience in gently, with the use of loo roll or socks as a very temporary measure until she gets to the one place she knows that won’t charge her what she can’t afford. It transpires (spoiler alert) they are out of stock, and it is rather harrowing to listen to what Jess eventually resorts to in desperation for something – anything – that can help her deal with discharge.

Jess describes what goes on in quite some detail. It may come across as though there are no likeable male characters in the piece, but they are out there – Jess acknowledges them as the ones not staring at her, not making snide remarks, just going about their business while she goes about hers. But the ignoramuses are, in the end, more memorable, and it is encountered with dismissive and sarcastic men that stick in Jess’ mind. The show asserts, with subtlety and nuance, that any shame or disgust with regards to periods is ridiculous when half the population at large have extensive experience of them. A thoughtful and succinct production.

Think you’ve been in a sticky situation? Think again.
Although Jess has had her mishaps with blood, she’s always been able to clear it up. Until now. Today, she has woken up with a familiar feeling between her thighs, in a bed she barely recognises. At the last of her money, she tries to find a way out… without making too much mess. Told through intimate, visceral audio, her journey sharply brings to light issues of period poverty and taboos about menstruation. A poignant, gripping story that is undeniably human.40% of all profits made from tickets will go towards Bloody Good Period, a charity helping those facing period poverty.
Find out more about them here: ​www.bloodygoodperiod.com