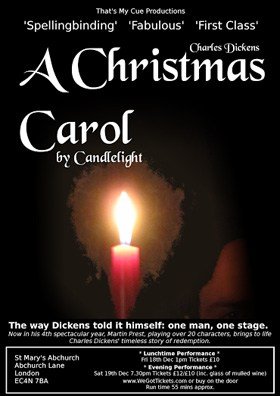 What Charles Dickens would have made of A Christmas Carol being performed in a church is difficult to determine. He liked Jesus Christ but didn’t think much of organised religion (and here the similarities between the great novelist and yours truly begin and end). On balance, I doubt he would have been against it.

Performing such a work as this in St Mary Abchurch, one of 52 churches in the City designed by Sir Christopher Wren in the decades after the 1666 Great Fire of London, gives it an appropriate atmosphere from an era that predates Dickens, particularly with the use of candlelight. This is a preaching house, really – the acoustics are absolutely stunning, with no need for amplification as Martin Prest’s voice reverberates around the church. Occasionally, though, the acoustics prove to be a little too good. Some of the more rapidly recited passages of Dickens’ text become slightly difficult to follow as there’s a bit of an echo.

I must say it’s a most unusual play, with no set, no background music, no costumes, and no scenery. There are few, if any, comparable shows with this style of delivery. BBC Television’s annual Richard Dimbleby Lecture is the closest thing that comes to mind, and that is hardly theatrical, as its title suggests. I do enjoy good old-fashioned storytelling, but it’s a bold move to do storytelling and absolutely nothing else.

But if it’s to be done this way, Dickens is an excellent choice. This all too familiar story – there wasn’t anything in the narrative of this adaptation that made me think ‘Really? Was that in the original Dickens novel?’ – is given an assured delivery. Reliant, as I say, only on words, the change of caricature between characters is so rapid it even leaves shows renowned for their speed, like The 39 Steps, borderline sluggish by comparison.

With such a passionate performance, it’s hard not to be drawn in, even if, like me, you’ve known the story since you were a schoolboy, and you know what’s going to happen. I still found myself eagerly anticipating what was to follow during this delightful hour. The attention to detail with each character was clearly distinct and highly effective. An enjoyable show, and one that’s of perfect length for those who find themselves time-poor during the festive season. There are plans afoot for further one-man show adaptations, and I for one will be keeping a keen eye out.