This was like an eighty-minute meeting that could have been an email. The only worthy bit of narrative was a few sentences, printed white text on a plain black screen, giving an overview of the life of the actual Pocahontas (c. 1596-1617). The details given gave momentary pause for thought, truncated by a swift return to what the production calls ‘comedy’, which seemed to consist of pointing out shortcomings in the narratives of fairy tales, at least from a feminist perspective. 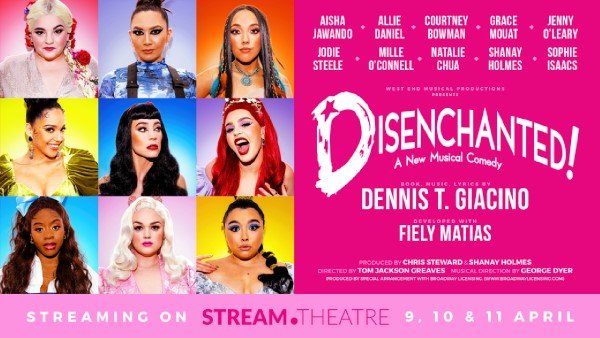 Of course, fairy tales are unrealistic: that is why they are called fairy tales. If anyone actually believes, for example, there was an actual princess forced into a deep sleep for one hundred years only for a kiss to wake her up, that is their prerogative. Here, the audience is expected to sympathise that fictional characters are not paid royalties by companies that make use of their names and /or images – a sideswipe, perhaps, at The Walt Disney Company – and that ‘happily ever after’ is not all it’s cracked up to be.

But the show does not explore precisely what should be done to remedy their apparently dire situations. It increasingly becomes clear that these are not characters choosing between heating and eating or queuing at a foodbank in the rain during a global pandemic (as the foodbanks cannot invite everyone inside due to social distancing measures), or any other signs of material deprivation: indeed, one of the musical numbers contains a repeated line, “All I want to do is eat”, with miscellaneous examples of the comfort foods the characters enjoy whenever hunger calls. It is therefore difficult to sympathise with them, and while their costumes may not necessarily be fitting for princesses, at least they have clothes to wear.

Even this, however, is cause for complaint, because (or so they say) their tits are so big (because their figures were, they also say, determined by sexually frustrated men) that whatever they wear is invariably uncomfortable. There is, apparently, a humorous aspect that permeates the songs and dialogue, though I haven’t a clue why a running gag about Sleeping Beauty (Allie Daniel) actually sleeping, for instance, should have had me convulsing with laughter.

There’s a lot of riffing and vowel-stretching (‘holding notes’ is, I’m led to believe, the technical term), to the point where most of the musical numbers sounded remarkably similar. Some of the lyrics are so repetitive I contemplated doing a tally of how many times a particular word is mentioned in a song. And then I found myself actually doing it, twice. Firstly, a song by Princess Badroulbadour (Courtney Bowman) used the word ‘secondary’ a reasonably mild nine times. Secondly, an ensemble number used the word ‘eat’ twenty-four times, though I may have underestimated that, as it was hard to tell with yet more riffing and holding going on.

Everyone is, to be fair, a good singer, and they all seem to be enjoying them on stage (or, technically, on-screen). The audience does come away with a good idea of what the characters are ‘for’ as well as what they are ‘against’, though I am not convinced the sheer bitterness and resentment in the show will resonate with fans and followers of Disney princess narratives: whatever the rest of us may think, such stories are popular (or at least commercially successful). And that can only be because somebody somewhere likes them.

Revamping the tales of ‘happily ever after’ in an empowering all-female musical romp, Disenchanted brings together a band of not-so-merry princesses, keen to rewrite their tales as old as time. Tossing their tiaras and setting the record straight, the royal renegades are here to comically belt out the truths that fairy-tales would have preferred stayed quiet.

It’s an intricate plot, laced with some subversive humour - that the female character is simply called ‘The Woman’ (Molly Lynch), for instance, is … END_OF_DOCUMENT_TOKEN_TO_BE_REPLACED

Andrea McArdle didn’t, when the 1978 movie Rainbow was released, look or sound like Judy Garland, and she still doesn’t. You’d be forgiven for … END_OF_DOCUMENT_TOKEN_TO_BE_REPLACED

TENNIS ELBOW is the first play that John Byrne has written for thirteen years, and is in fact a companion piece to his critically successful Writer’s … END_OF_DOCUMENT_TOKEN_TO_BE_REPLACED

It’s all a bit banal, really - or perhaps I’m too heavily influenced by some of the other online productions that I’ve seen recently, which deal with … END_OF_DOCUMENT_TOKEN_TO_BE_REPLACED

Mandy Gonzalez is one of those Broadway actresses with a number of dedicated fans and followers, and it’s easy to see why given her sunny disposition … END_OF_DOCUMENT_TOKEN_TO_BE_REPLACED